With more Stimulus on the way, I'd be shocked if BTC didn't hit $100k by July

What are you doing with your Stimulus?

Anyone that put their first stimulus check into bitcoin has been handsomely rewarded.

With another round of stimulus from Uncle Sam likely coming in the next several weeks, it begs the question, where will that money guy?

If you had put your original $1200 check into bitcoin way back when you'd be sitting on a profit of almost 750% at this point. 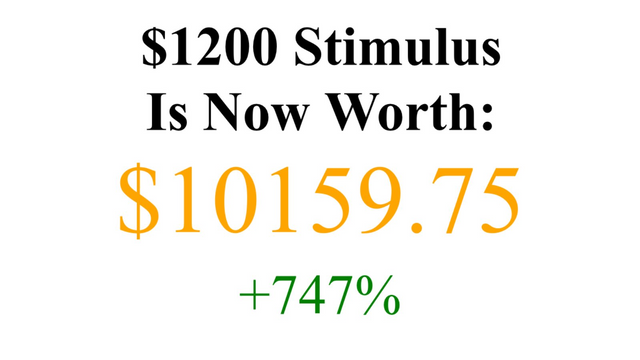 This was the original check that people got middle of last year.

Since that time we got another $600 dollar check which is said to soon be followed up with a $1400 check.

Considering how hot the crypto markets have been, as well as the stock market, I have a very good guess where a lot of that stimulus money is going to go.

And it rhymes with ripto.

This time around though, people are going to be getting a lot more money.

From what I have read it looks like they are going to be shipping everyone $1400 checks including that same amount to children as well.

That means a family of 5 could get something like $7k.

While there are a ton of people out there that badly need this money just to survive, there is a chunk of it that will inevitably go to people that don't really need it.

Those people will very likely be pumping it into bitcoin, crypto, and stocks.

If you thought the rally right now has been explosive, just wait a few more weeks when retail starts pumping billions in.

At this point, I'd be shocked if bitcoin doesn't hit $100k by July.