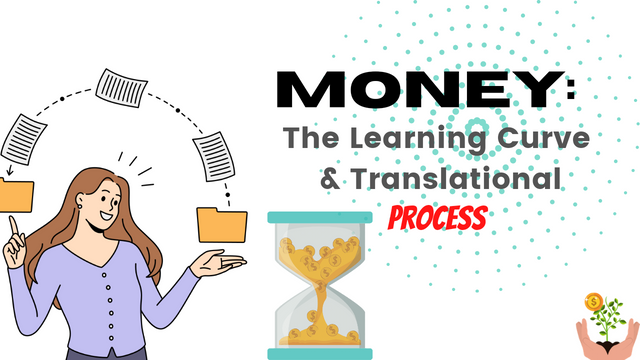 As a teenager, I was used to scarcity, so it was either I found ways to cope with it, or implode under its pressure. Originally I was used to the idea that life was meant to be difficult, and it was one's capacity to beat these obstacles.

This mindset was different from people who were born into abundance. While these people had a different definitions of wealth, money, and what life is.

Being exposed to their way of thinking only made me realize how one's economic background can affect their ability to see life's broader perspective on things like money, comfort and opportunity.

Now, I must say that I appreciate being raised the way I was because it helped me to understand the meaning of survival, the application of effort, and the effort it requires to embark on and sustained growth.

Haste and impatience are not something I'm used to and this is why I pretty much did see my early 20s as a stage of understanding, while many were already past that. Let's take a look at it this way. No one can originally tell Satoshi's aim for BTC but it's a technology that's arguably changed more lives than any other tech has done in a space of hundreds of years.

However, you'd find out that time is what brought about its progression. As for people who are willing to survive, it's easier to build financial freedom within the space of 10 to 15 years.

However, we have people who aren't used to waiting and want to become rich before they're 25, because they don't understand the slow translational process, they end up tailoring their lives to schemes that promise billions in such a short time.

A lot of people feel that being slow in life is bad, being poor before being rich is bad, and many people want to skip the challenges of life, the scarcity and the stress of competition for resources and that's why we mostly wish to be born into wealth, with not an atom of deprivation.

However, reality says otherwise. Now, survival is something that's humanistically imbued, this is the main reason why we're creatively instinctive. The real concept of money is to establish value, reward efforts as well as for the validation of exchange.

Some other psychological reason for money is to create a system of mental comfort, where people can bask in their ability to express their financial willpower. Nevertheless, we are not always opportune to have the financial backing we want.

Why should we become used to slow growth and the learning curve that comes with it? This is because sustainability is not achieved when you're opportune to build wealth overnight. It takes more. If everyone was born with the expressiveness they crave, would it be possible to create a world of economic balance? No.

Sometimes, it's important to appreciate scarcity and delay, this is because it creates the essence of sustenance to our efforts. While many people abhor scarcity, they've failed to acknowledge that it has taught them the principles of financial discipline.

The Grace To Grass Mentality

We should wish to skip life's difficult process because while money is the dream and goal, management and sustainability are even more important. The worst form of punishment is being rich at one point in time and not being rich anymore, because of mismanagement or the inability to apply the multiplicational process to increasing money.

No one wants to be limited, and scarcity alone is the definition of limitation. In life, one of the biggest aims of a human being is to have the freedom to attain monetary happiness, one that can be achieved by owning enough means.

However, it's important to understand the building process. Making money or building wealth should be timeless and not seasonal. This is why we should aim to reduce excessive work for less profit, but rather, build systems where we can work less while having more.

It is a good learning curve to have experience of how it is to have a scare and abundance financial background, you tend to get the knowledge and skill to manage money like the gras to grace you mentioned, rather remain poor than to be rich then become poor due to mismanagement.

The gradual building of wealth process does have a good impact in our lives if we look at things broadly.

I agree with you in everything you express in this post. Without a doubt, it is a subject as interesting as it is exciting that you deal with in your article today. Personally, I think that wealth is a good or value that arises from the proper mentality and effort (in most of cases), or from inheritance (in some other cases); and given that poverty is what is most prevalent in the world (95% of the world's wealth is in the hands of only 5% of the world's population), I think that we the vast majority of people can only achieve wealth if we develop the right mindset and we work towards it.

Certainly, I also think that patience is a timeless value, and I believe in the supreme value of effort and ingenuity to overcome poverty and achieve lasting wealth over time. I think the effort is the key point on this subject because that is how true wealth is acquired that goes beyond simply having money; true wealth consists of knowing how to create wealth, because being so, even if you lose your money or it is stolen, you will be able to recover your wealth because you know exactly how to do it.

Its sad to see how our mentality towards money has elude the main purpose of acquiring wealth.

Anyone can get rich but not everyone can stay rich. Staying rich requires a lot of patience and commitment to grow.

Its more like a race than a journey when you think of the vast majority's level of thinking.

This is why people with patience are the ones to succeed.

Oh this is what I tried to pinpoint on dbuzz previously. It's a good thing to admire or desire good life if you don't already enjoy one. It's quite unfortunate that some people don't want to go through any stress at the cause of trying to achieve a better life.

Most especially as you mentioned ,if they're in the entourage of those who were born with the silverspoon as we do say. Any successful man that has no questionable background has one or two ugly story to tell about their starting point. You just need to ask one of them to tell you their story and you'll know it was never easy.

Many are born with talent, but they prefer to envy Mr. B who's already killing it instead of look for ways to activate the gold mine within them.

The building process is kind of unavoidable and I also saw that scarcity was one of the key factors to get people hooked on things. I think it's due to a lack of financial education and it takes time for people to learn it as well.