Update on Crypto Class Action - Over $A1 Billion in claims signed up!

The last few weeks have seen major progress on the Class Action lawsuit against Facebook, Google and Twitter's banning of cryptocurrency advertising.

One Billion Dollars in Signups

We have passed a major milestone of One Billion Australian Dollars in claims from people signed up to the Class Action (called a "book build" in litigation funder speak).

This is a huge achievement with zero marketing budget and positions us a a very attractive economic proposition for investors, particularly big institutional litigation funders like Harbour Litigation Funding or Augusta.

It is one of the biggest book builds ever for an Australian class action, and a recent High Court decision has made large book builds essential for litigation funding.

Funding Secured for Advice from Best Advocate Lawyer in Australia

In order to unlock the US$3-5 million we need to fund this lawsuit to its conclusion, legal advice on prospects of success from a big name Senior Counsel (barrister / advocate) ("SC") is required.

We have lined up the person I believe is the best SC in Australia (I have worked with him before) to provide this advice, in cooperation with another well regarded SC who I've known personally for years and a major law firm, the managing partner of which I have also known for years.

Over the past many months we have been looking to secure the substantial funds required to pay for this advice.
I have personally taken out a mortgage loan to allow us to move forward on this while we seek to raise more funds from investors.

We now have access to the minimum funds required to start this process and the process of preparing this advice has begun.

We expect to have this detailed and critical piece of legal advice finalised in the next couple of months.

Lawyers don't normally work for free, especially in Australia where they are not allowed to get a percentage of winnings (only independent litigation funding firms like JPB Liberty can do this).

But the major law firm and SC who are working with us on this case have done a lot of work off-the-clock to push this forward over the last nine months. Together we have prepared a mountain of evidence including statements detailing the impact of the Ad Ban on various type of cryptocurrency industry members such as investors, exchanges, miners, mining equipment manufacturers and crypto projects (like Steem / Hive etc).

They are doing this not just because of personal relationship, but because they see this case as a winner that could massively boost their reputation to the top of the legal totem pole (and make them a lot of money in legal fees).

Detailed analysis has been conducted and a paper prepared on the various types of damages to different industry players from the Ad Ban.

As noted in our previous post, the SUFB token has moved to Hive-Engine.

We will also be ending the bonus SUFB tokens for signing up for the class action on 30 June 2020.
These were always intended to encourage and reward early supporters and now that we have reached A$1 billion in signups they are no longer necessary.

Going forward, the opportunity to recover your losses from the Crypto Ad Ban (including $1100 for every ETH you had, $6 for every Steem you had in late Jan 2018 and similarly large claims for every major crypto) should be sufficient incentive to join the Class Action.

So if you haven't yet signed up or have friends or family who haven't get them moving to sign up before 30 June!

Last chance to invest at 25c per SUFB token

Once positive legal advice is received from the top SC, JPB Liberty will substantially increase the issue price of SUFB token to future investors to reflect the dramatically increased prospects of this case being fully funded, proceeding to Court and resulting in very large settlement or damages award.

JPB Liberty is currently offering 3000 SUFB tokens for sale at 0.8 Hive (~25c) on Hive-Engine and investors wishing to purchase a large amount should contact me directly ([email protected] or Telegram or @apshamilton on Discord).

See Investor one pager below. 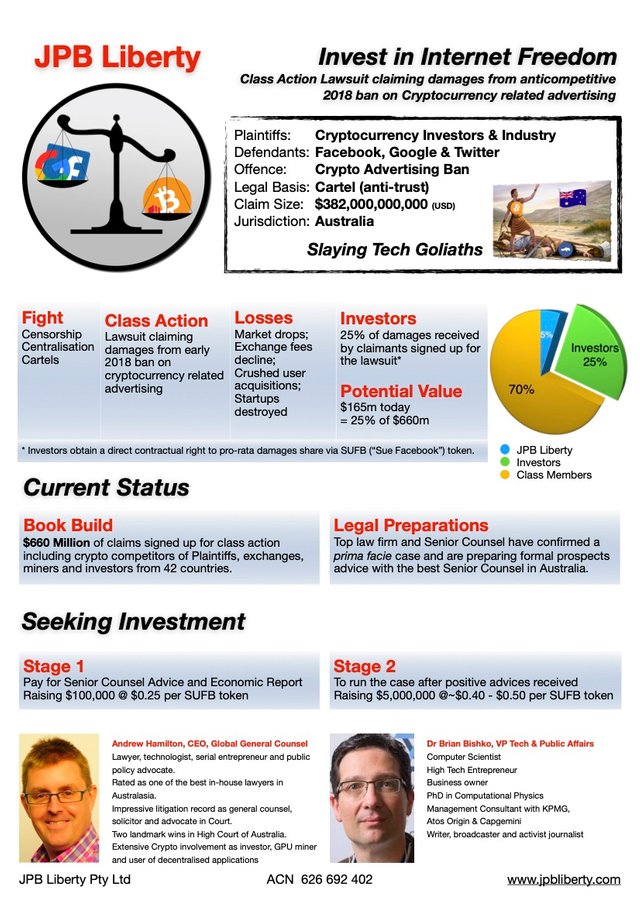