A little taste of Altseason...

Did you see that? It was a brief glimpse of what may be in store with our next Altseason...

If you blinked you missed it as it relates to HIVE, but it was a nice little taste never the less.

Everyone has been in a hurry to change things on HIVE due to the brutal unrelenting downtrend ever since it got near $1 several months back, but perhaps there doesn't need to be a complete overhaul...

Here was our brief glimpse: 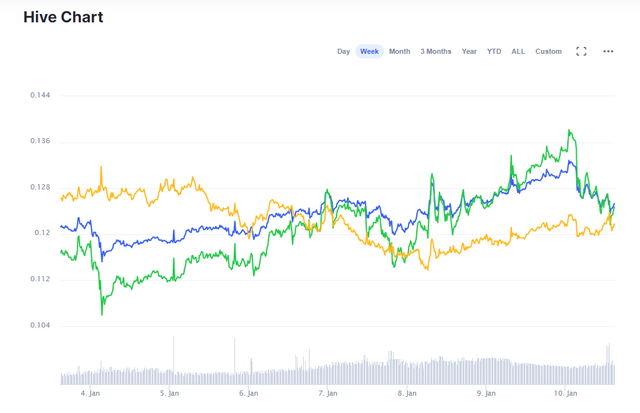 While hitting $.138 does't sound spectacular, and that's because it's not, keep in mind that the price of HIVE hit $.105 less than a week ago.

For those doing the math that is more than a 30% gain in less than a week.

Now that is something more along the lines of what many here are hoping to see during an altcoin season.

HIVE tends move later in the rotation to altcoins...

Unfortunately, and this is a trend I have been noticing as it relates to HIVE, when bitcoin consolidates the large cap alts move first followed by the mid cap and eventually the small cap.

When this happens, HIVE tends to be at the end of that rotation and by the time HIVE starts going up, bitcoin ends it's non volatile price action and alts get rekt.

We saw this yet again as HIVE and altcoins really started flying yesterday, only to have bitcoin fall out of bed this morning and wreck the little momentum they were starting to build.

I've see this exact setup play out several times with HIVE over the last several months, hopefully at some point that will change and we can see a prolonged altseason.

On the flip side, I think this should tell us that HIVE does have the ability to move and it's not literally a stable coin.

It just tends to be one of the later altcoins to move during a rotation into altcoins.

With all the drama surrounding Trump and centralized social media sites, now is the time to promote HIVE probably more than ever before.

Having an altseason pushing up the price a little should only help with attracting more users as well.

We may just have to wait a bit more before we see a prolonged altcoin season for HIVE.