If it feels like bitcoin has been making a lot of new all time highs lately, that's because it has.

Since the halving happened back in May, bitcoin has made 24 new all time highs, with the vast majority of those coming in the last couple months.

In fact, 23 of those 24 new all time highs happened just within the past two months. 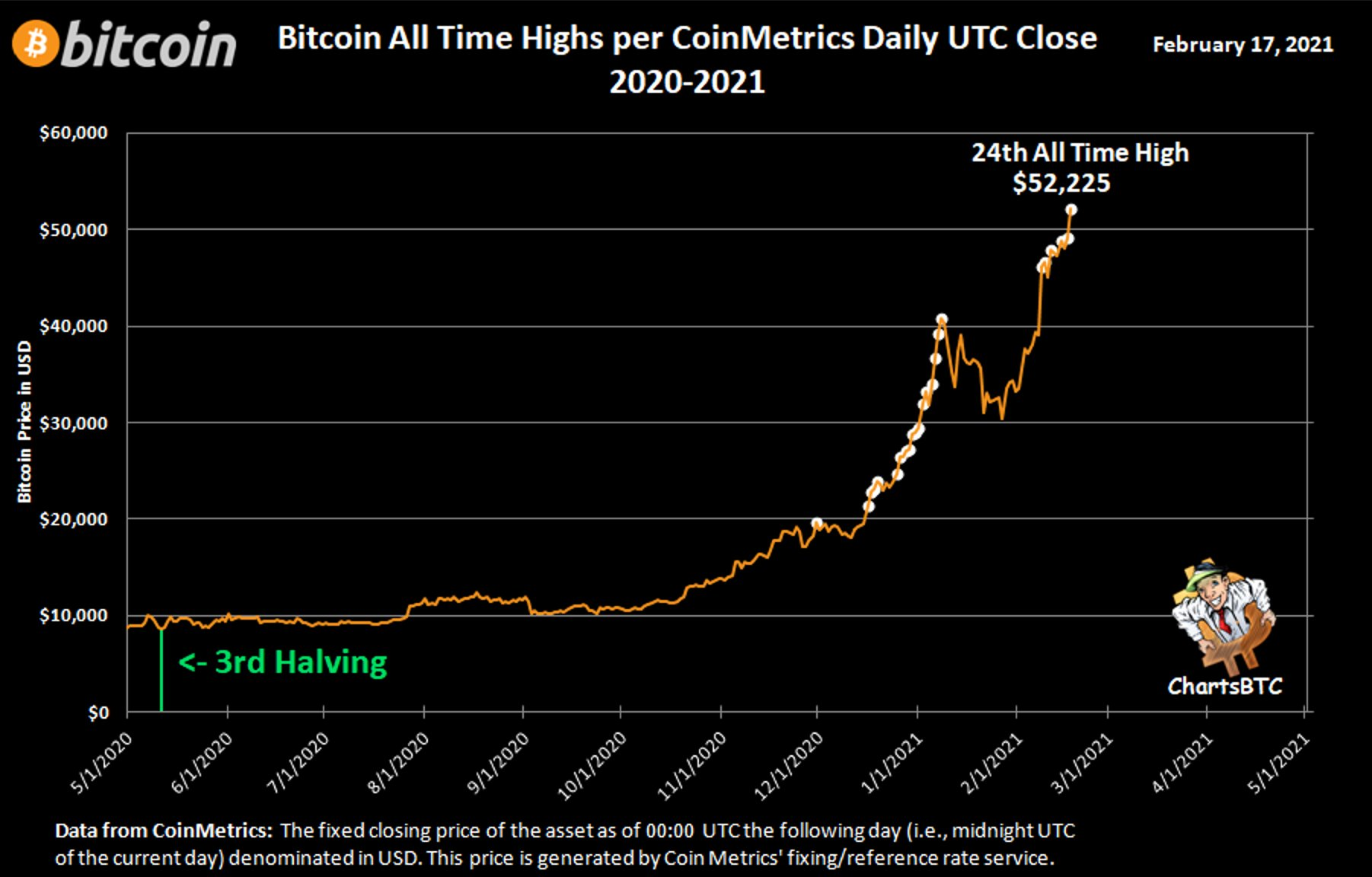 Bitcoin is no different.

In fact, this is the same pattern we saw back after both of the previous two halvings...

Bitcoin likely doing what it tends to do

With bitcoin making its 24th new all time high during this current cycle today, it looks like bitcoin is doing pretty much what it did after the previous two halvings as well. 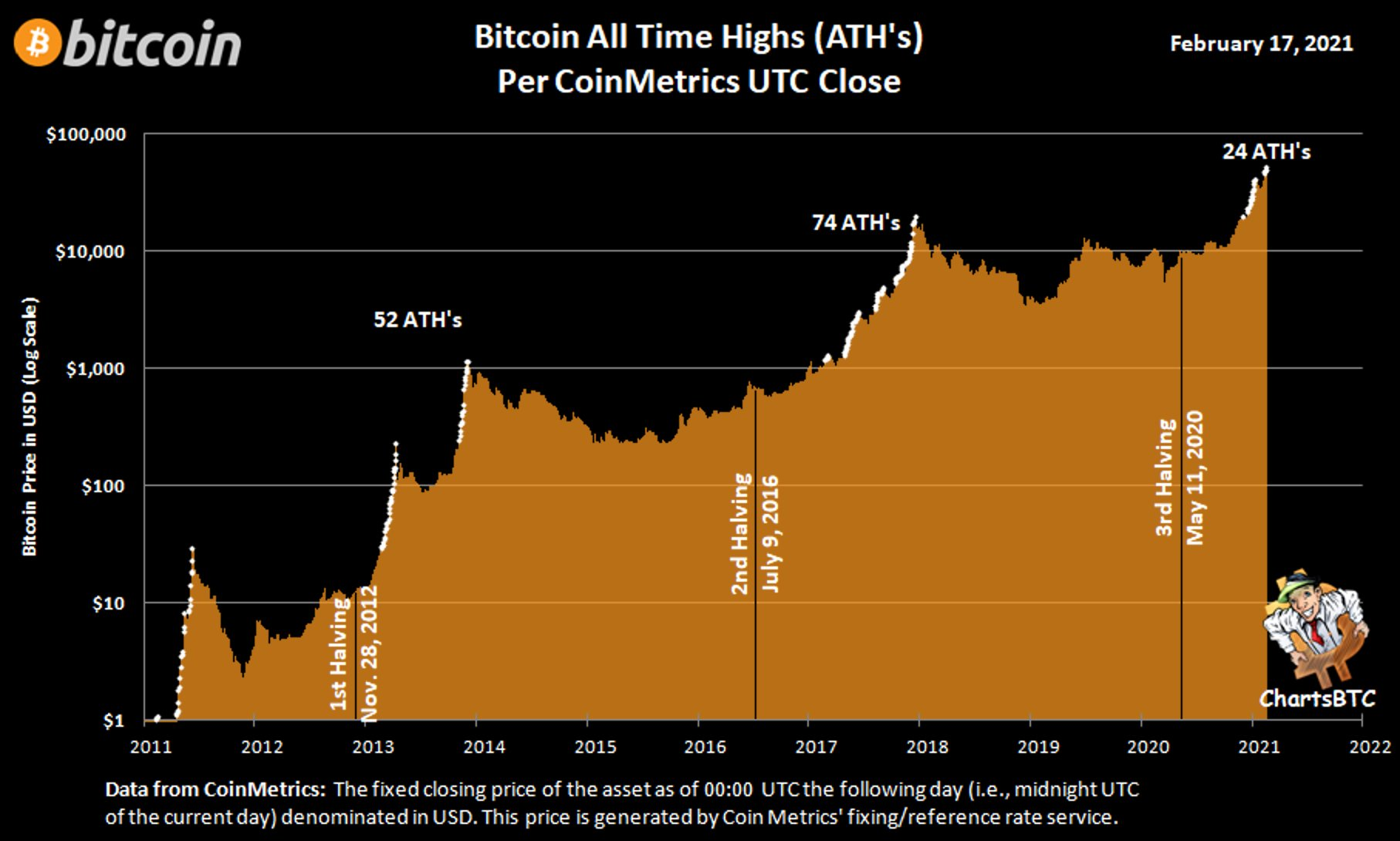 That means that if we continue to follow the pattern of 2017, which I think we are likely to continue following, we are still going to see roughly 50 more new all time highs before it's all said and done.

I don't think it will be exactly 50, but somewhere around there seems possible/probable to me.

If we follow more closely to what happened back in 2013, we would see roughly 28 new all time highs still from where we are currently.

And unless the price of each new all time high is only slightly higher than the last, either scenario suggests that bitcoin is going to go a lot higher than the current levels in the coming months. 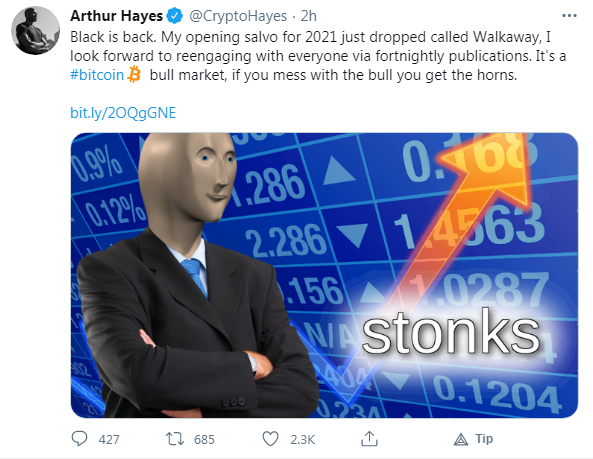 It looks like Arthur Hayes showed up out of nowhere today, posting this:

In case you don't recall, he's the former CEO of Bitmex that has been on the lamb ever since being charged individually by the DOJ several months back.

He's been completely silent on social media, until today.

I don't think his Exchange suddenly being forced to change the way they do things coinciding with bitcoin really starting to take off was any kind of coincidence, cough cough manipulation.

From that context, him resurfacing is interesting on several levels.

I have no idea if he's being hunted by authorities, but last I read, he is...

Get your popcorn, things are getting exciting in several different fronts.

Oh and don't forget Michael Saylor and co will be buying about a billion worth of bitcoin tomorrow.