Curious what's going to cause the next leg up in BTC? More stimulus... and Elon Musk wants to be paid in Bitcoin!

Bitcoin has had a massive run, and some are starting to wonder where the next catalyst might come from...

I see a couple possible catalysts on the horizon, with the main one being more stimulus.

Some other potential catalysts include: 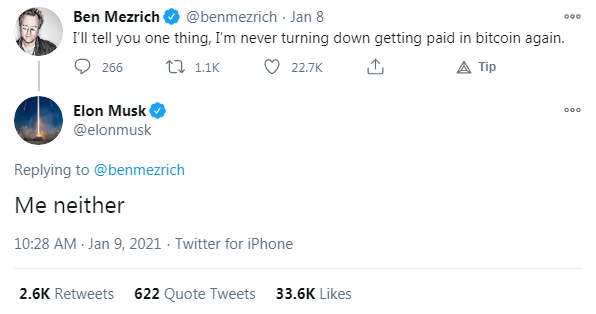 While that doesn't technically mean that Musk will be paid in bitcoin any time soon, it does sound like he likes it a lot better than cash, which is the first step.

Once you take that first step, the next couple steps towards bitcoin become pretty easy.

Back to Biden and more stimulus...

Biden has recently called for those $2k checks that weren't able to get through the Senate just a few weeks ago.

He's also calling for a national minimum wage hike to $15 per hour saying that every American working a full time job should be able to live above the poverty line.

Something that sounds great in theory, but eventually those wage hikes simply get passed on to customers and eventually back to those receiving the benefit as everything else goes up in price as well.

He's also calling for a $3 trillion tax and infrastructure plan.

And now that the Democrats control the Presidency, the House, and the Senate, the odds of these things passing are significantly higher than they were under a split congress.

I wouldn't be in a hurry to sell anything priced in dollars over the next 12-24 months as I suspect we are going to continue to see higher prices basically across the board and a weaker dollar in the medium term.