Every cycle there is going to be a new wave of self proclaimed idiots.

I know because I was one of them that didn't buy when I first heard about it when it was a couple hundred per coin, not making my first purchase until after it was worth $1k.

However, not many of those cycles have worse bitcoin idiot stories than this one...

Nick Allen didn't buy bitcoin at $2.70 on a dip when he was contemplating getting in:

I feel your pain Nick, not buying at $200 when I first head about it, though my pain isn't nearly as bad as your pain.

The lesson here for us to not be like Nick.

We have all heard about bitcoin now and we have been given ample dips to get in. Sure we might not get the exact bottom but over the years that probably won't matter.

Look at Nick, his tweet was almost a decade ago at this point. If you buy bitcoin on a dip now and then look at it again 10 years from now, what do you think it might be worth?

To be honest I don't even have a good guess as to what it might be worth, but my guess is that it will either be significantly higher than we are right now, or it will be basically dead.

Based on all the information we have available today, the facts would support the former vs the latter.

That has a nice ring to it doesn't it?! I feel like I've heard something like that before...

Michael Saylor continues to buy each dip with the cash he has available with plans to hold for years and decades.

In a segment on CNBC today he dropped a huge nugget about how he is putting together a large conference with thousands of executives from other companies looking to learn and gain some exposure to bitcoin: 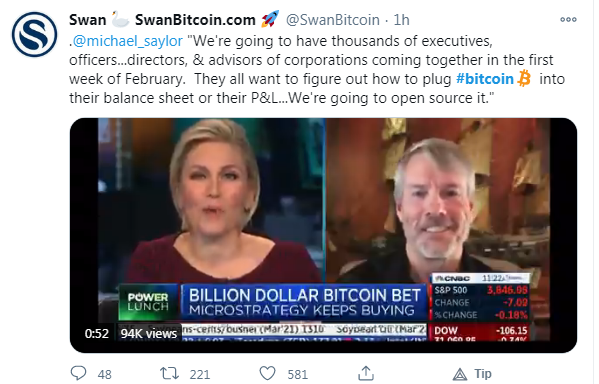 The plan is to educate other companies and executives on how they too can get in on the bitcoin action.

If one company has been able to do as much as MicroStrategy and Michael Saylor have been able to do, imagine what might happen when thousands of companies all get together and want in on the action...

This is a major reason why I don't think bitcoin is going to dip much more than it already has.

These corporations represent tidal wave of money that could be coming into bitcoin over the coming weeks/months.