If you bought BTC yesterday, you were in good company buying alongside MicroStrategy and Michael Saylor

Were you a bitcoin buyer yesterday?

If so, you were in good company...

The CEO of MicroStrategy, Michael Saylor announced that the company bought $10 million worth of bitcoin yesterday during the dip.

Specifically, they bought roughly 314 bitcoin at an average price of $31,808: 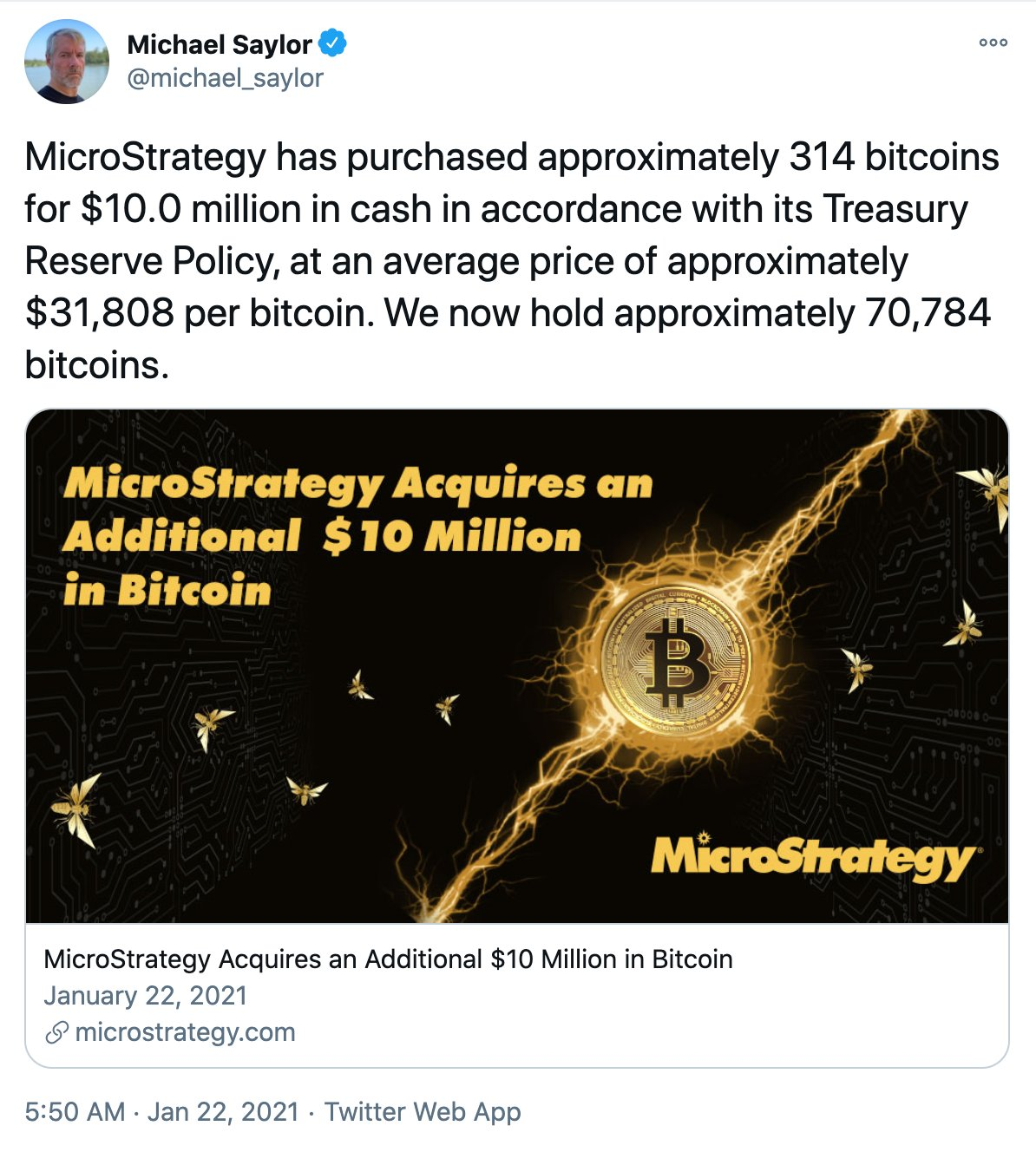 This purchase brought their total holdings to 70,784 bitcoin, which is worth roughly $2.3 billion at the currently price of $33k per coin.

The reason for the dip yesterday mostly had to do with news circulating that the bitcoin blockchain had experienced a double spend event which was eventually proven to be false.

Most bitcoin veterans were highly skeptical that this had actually happened, but the narrative itself was enough to spook the market for a period of time.

The lack of conviction by some BTC bulls still surprises me...

Sure bitcoin has run up a lot in the last year, even more when you count the March lows of last year, but the thoughts on where we go from here seem to go against what every past bull market implies is coming next.

For example, there are many bitcoin bulls out there calling for a drop to $20k from here, some even calling for lower numbers than that.

However, a move of that magnitude would represent something larger than bitcoin experienced during the entirety of its 2017 bull market.

When you factor in where we are in relation to bitcoin's previous halving event, the odds of a correction of that magnitude are even less.

It's a possibility in the same vein that anything is possible with bitcoin, but history says it's not probable.

Plus, when you hear people talking about a pullback to $20k or lower, and then these same people are calling for $250k this year, or higher, you start to wonder how exactly they think the price is going to go up that much that fast.

Going from $1k to $20k is a lot easier and requires a lot less money than going from $20k to $400k. Bitcoin starting from a higher point makes getting to those lofty levels easier and that much more likely.

Anyways, did you buy yesterday? If so, you were in good company. The last several times Michael Saylor and MicroStrategy made big bitcoin buys, the price went up shortly after.