Bitcoin isn't likely to see much resistance around current levels...

Given that bitcoin has only traded above the current price for a handful of days throughout bitcoin's entire history, there isn't a ton of resistance around here.

Specifically there isn't a ton of "memory" around current levels.

For example, $20k or $25k might be a psychological resistance level given that they are big round numbers.

Bloomberg tends to agree with this line of thinking... 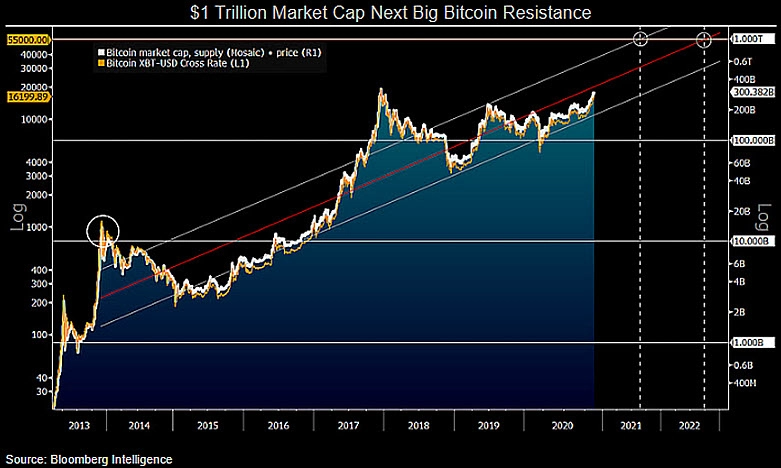 Bloomberg says next major resistance likely to be around $1 Trillion

Bloomberg put out a piece this morning indicating that $1 trillion may be the next major resistance point for bitcoin.

Their rational can be seen on the chart above.

The neat thing is that not only did they give a price projection, well market cap projection, but they also gave a time frame of when that might happen.

Based on the chart above, Bloomberg sees bitcoin hitting $1 trillion in early Q3 of 2021.

For those wondering about the price target, that would equate to a little under $54k.

That means Bloomberg is roughly calling for a $54k BTC price target by early Q3 of next year.

That is quite a bit lower than many of the other price targets out there, but I don't think many here would be too upset if that is all we get out of BTC during this cycle.