Over time, Bitcoin just goes up which makes trying to trade it very risky

Everyone is trying to time a top or look for a high point to sell, but if you zoom out, hodling tends to work pretty well

Ever since bitcoin was created it was gone from the lower left to the upper right.

Sometimes it is easy to forget that watching it run up to $1k then crash down to $200, or run up to $20k and have watch it crash back down to $4k, but if you zoom out enough, it's pretty clear what is going on here.

Bitcoin has self imposed supply crunches every 4 years that send the price skyward, and it's worked the same every time thus far.

Bitcoin has had 3 halvings and the price has clearly reacted to these halvings, it's never been more clear than in one simple chart.

Check out the chart below showing bitcoin's price with the halving dates labeled there in red. 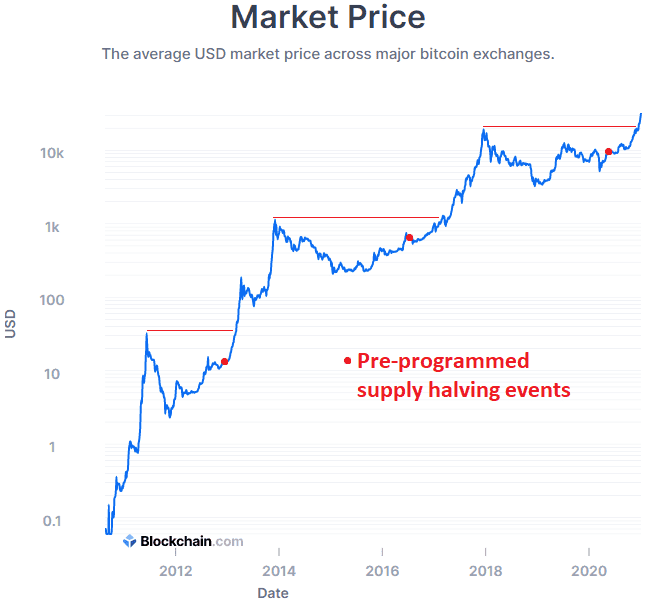 Plus you can see that there is a trend for the gains to really accelerate in the year following a halving, which is right where we are right now.

Trying to trade Bitcoin can be a fool's errand

I've already lost some of my bitcoin trying to time rips and get back in on dips during this move.

For example, once we broke through $20k and got to the $22k-$23k area and started to slow down, I took some BTC off the table thinking we would get a retest of $20k.

At this point there has been no retest of $20k, and it's gone more or less straight up to $42k with one major pullback down to $30k.

I was forced to buy back in on that pullback, which was ironically still 30% higher than where I sold some, ugh.

There will come a time when taking profits makes sense, but keep in mind that whenever you take profits its very possible you end up missing out to the upside.

Past patterns point to this thing going well over $100k and it happening towards the end of this year.

There is no guarantee that things play out exactly in the same fashion, but the good news is that if you look at history, there is a very good chance the price will be higher if you hold it long enough.

So you missed the run up to $1k the first time around, well, several years and halving cycles later and it's trading for $40k.

I think those people are glad they didn't sell at $1k.

Anyways, just some rambling thoughts on not being in too big of a hurry to sell during a bull market.

Based on a couple recent patterns I've posted the fun really hasn't even begun yet.

Imagine selling at $40k and watching it go to $250k before this year ends... because that is pretty much what past patterns are saying could happen.