wLEO is off to a tremendous start on Uniswap!

Who doesn't love a comeback story?

wLEO was the victim of a malicious hack that was able to drain a substantial portion of liquidity provider funds several weeks back.

However, the LPs (liquidity providers) were eventually reimbursed and significant security upgrades were undertaken since that time to prevent something like that from ever happening again.

Which has lead us to today, the launch of wLEO 2.0.

wLEO launched today on Uniswap and the total liquidity is already close to $250k. 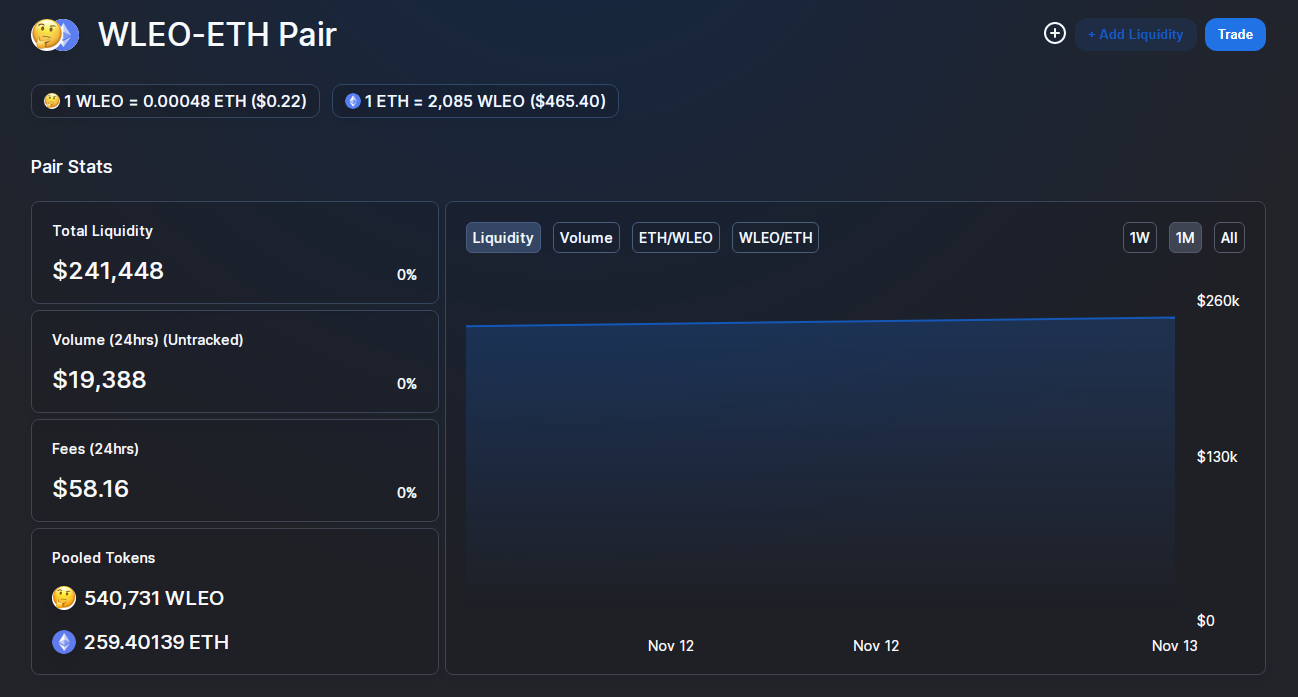 The total LEO wrapped thus far is close to 550k and the token price is up over $.22 per.

All things that point to a surprising (or not surprising if you have hung around the LEO community for any length of time) amount of confidence in the relaunch of wLEO on Uniswap by LEO investors.

The previous pool had roughly $450k total liquidity at the peak (right before the hack), so the $250k right out of the gate on day 1 is a very solid start.

wLEO is very important to the LEO growth story

Some might have wondered why pursue another wLEO launch with the way the last one ended up going...

The reason being is that because a wLEO listing on Uniswap opens up a ton of doors for LEO.

Specifically, it will make it easier to get it listed on other large centralized exchanges due to the ability to show volume numbers on Uniswap to would be exchanges, letting them know why they should list wLEO.

(Plus there is another token out there with a tremendous market cap named LEO as well, so wLEO takes care of that problem)

Also, it provides an on-ramp to the ethereum ecosystem which has hundreds of thousands of users and billions of dollars invested in it.

Things that may prove crucial in terms of helping LeoFinance.io grow and add more users.

Which is most likely what will need to happen in order to see tremendous price appreciation with the token.

If you are interested in getting involved as an LP, they have a couple sweet incentives for you...

First, you can earn a portion of all the trading fees generated in the pool.

If you are interested in becoming an LP for wLEO on Uniswap more info on it can be seen here:

Let me know in the comments below if you have any questions or concerns about how exactly to do it.

Personally, I am undecided whether or not I will be an LP this time around, but it's not due to any security concerns.

It's due to the fact that I think LEO is going to ultimately go a lot higher than it is right now and I don't want to be in a position where LEO runs up a lot more than ETH and I end up with a bunch of ETH and no LEO as LEO trades for much higher prices...

It's a pretty good problem to be concerned about when you really think about it. :)

Anyways, good to see wLEO off to such a good start and I look forward to seeing the tremendous growth that is likely to follow in the coming months for the entire LEO ecosystem.