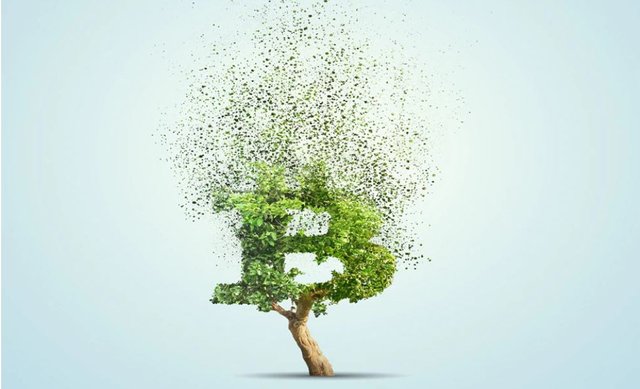 The concern around Bitcoin's energy usage reminds me of 2017. Back then, most people wanted institutional adoption of Bitcoin, just like today. It was thought that if there was an ETF of Bitcoin, then it would be easier for institutions to buy and hold Bitcoin and thus make Bitcoin a part of their asset allocation models. Institutional adoption is important since it brings massively more money into Bitcoin. Capital inflows mean acceptance of the technology by the world elite and thus ensure that there is a bigger, stronger lobby group for the cryptocurrency.

As of today, an ETF is not necessary for institutions to buy Bitcoin. There are many ways for them to buy Bitcoin. My post from a week ago highlights some of those many ways. However, Institutional Capital's lack of conviction about investing in Bitcoin has transpired into a new problem - Bitcoin uses up too much energy and is bad for the planet.

Firstly, their lack of conviction is understandable. While some of the sharpest minds in the financial sector will have no qualms about changing their opinion on Bitcoin (Stan Druckenmiller, George Soros, PTJ, and many more), many investors do not have such a nimble thought process. They attach their egos to their opinions. A change in opinion will imply an attack on the self. How can they digest the fact that retail consumers were smarter than them to see value in something first. However, now that most institutions also see value in Bitcoin, they have to justify their laziness or lack of understanding of this "blockchain" based currency and find alternatives as to why they did not invest in Bitcoin.

The best way for them is to bring to the front, a big problem about Bitcoin that makes them look extremely good - concerned about the environment, socially responsible, etc. That problem is how Bitcoin is becoming so big, that in the future it will consume the energy of the entire universe. A little exaggerated but it gets home my point. It seems that the only thing between institutional money and Bitcoin is how the latter falls short on the ESG front.

While the government did approach us for assistance on bitcoin, this is not something the World Bank can support given the environmental and transparency shortcomings
Source

This is what the World Bank had to say when it rejected El Salvador's request of helping them adopt Bitcoin as legal tender. if you're wondering why will the world bank help El Salvador in the first place, then ignore that thought for the moment. Let's look at the highlighted text without finding any hidden messages in it.

Just like Elon Musk, the World Bank also stated 'energy usage' as Bitcoin's biggest shortcoming as far acceptance from around the world is concerned. Of course, this is what people want us to believe. Elon Musk too would have faced pressure from the board to tone down his love for Bitcoin. Could his growing love for Bitcoin have impacted Tesla's inclusion in ESG compliant ETFs?

From an ESG standpoint, the only alphabet that matters to us is E. While Tesla may score a big 0 on the governance front, Social and Governance aspects are not our concern for the purpose of this post. E stands for environmental and ESG investing is what many investors call responsible investing.

The problem with rating Bitcoin on the ESG front is that E is difficult to measure the energy usage of Bitcoin. The best answer I have is from this article.

In a report published by Galaxy Digital and confirmed by International Energy Agency (IEA), the annual electricity consumption of the Bitcoin network stood at 113.89 terawatts per hour per year (TWh/year) whereas, the banking systems consume 263.72 TWh/yr while gold mining consumes around 240.61 TWh/yr of energy.

The article states that most miners depend too much on energy derived from fossil fuels. Now, that is no their problem, is it? The real problem is that governments in those countries have done little to change the sources of energy. Additionally, energy derived from fossil fuels is important to run power grids efficiently. Switch all energy resources in a country to green ones and the problem is solved. It is not as if miners are choosing electricity based on what source it comes from.

Investors are warming to ESG because the next pool of capital will come from Millenials. Apparently, Millenials care too much about ESG ratings. Millennials also have a growing lack of trust in the traditional financial system. Are institutional investors doing anything about that?

Today, an article on Coindesk caught my eye - From a $1T Asset to a $100T Network: Everything We Learned About the Bitcoin Mining Council From Michael Saylor’s Twitter Spaces

the extremely limited function of the council, which in her articulation, was to figure out better standards for reporting the actual energy mix that miners used.

Indeed, as part of this, it was clear that while the miners had previously said that the main thing they agreed to was voluntary disclosures of energy data, Saylor had in mind a much larger PR war.

When asked about the main threats to Bitcoin, he said that it wasn’t shareholders advocating on the basis of ESG concerns, instead, it was, .. , the potential for a woke mob of citizens who get inflamed about Bitcoin’s energy use .. aided and abetted by a media who spoil for a fight.

Above, I have shared 3 excerpts from the article that in my mind explain everything. First, all this debate about the energy usage of Bitcoin mining is useless unless miners openly state how much energy they use and what is the mix. Second, all the negativity about Bitcoin mining is PR, and Bitcoin needs PR to fight it.

My belief is that all this crap about Bitcoin's energy usage is a facade for many investors behind which they can hide their incompetence. However, if Michael Saylor wants to be today's biggest Bitcoin evangelist, then so be it. If he can help fight this criticism of energy usage, then it will only do us some good. Millennials do not give a rat's ass about how energy-intensive Bitcoin mining is. They were the first to adopt Bitcoin as compared to those highlighting all the energy concerns today. It all reminds me of 2017. The difference is that back then an ETF made sense. ESG concerns today do not.