My Response to Steem-Engine/Hive-Engine Migration Plans

I was writing a comment to @aggroed's latest post in which he laid out some of the plans and concerns over the Hive-Engine migration for tribes and it got longer than I expected, so here's a blog post:

First of all, let me just express some gratitude to @aggroed and Steem-Engine. I truly appreciate what they've done for me and for this community. Creating a tribe supercharged my hive journey and I know that it did the same for hundreds of other long-time community members.

With that said, I still have an issue with repaying for the same services rendered. If there was something unique about the "new" services offered by Hive-Engine, then I would happily pay for them.

I would gladly pay for the following:

Paying for things like enable staking, enable delegation, etc. doesn't make sense to me - honestly, I didn't even like paying 1000 ENG for each of these the first time around (especially considering that I had to do it for 3 tokens - LEOM, LEOMM and LEO). It's a literal flip of the proverbial switch and has no marginal cost for each additional usage -- i.e. if 1 tribe owner does it, it has the same cost to Hive-Engine as if 1000 tribe owners do it.

Charging for the first go around to cover the development costs of those features makes sense, but charging us again for "passing go" doesn't sit well with me -- we're moving to a nearly identical chain and I don't believe that the cost to "re-develop" these services is the same as when Steem-Engine first created them.

I want to support Hive-Engine and the work that goes into its creation and ongoing maintenance, but repaying for services that I've already paid for is more like a donation than a sale.

Another analogy for this is that we (tribe owners) came to eat at the Steem-Engine restaurant. We sat down at our table and ordered our food.

I say "yes, let's move over there. All my friends prefer tables over there anyways. I wish we could've just sat down at that table orginally."

Then you say "ok, we can move you over to that table, but we're going to need you to pay again for all the food you just ordered and aren't finished with yet. We'll comp you for a small portion of the meal, but its up to you to buy all of the same food again.

We can actually re-use the majority of ingredients that are currently on your table and just re-make the meal, but you're going to have to pay nearly full price at the new table. Alternatively, you could just stay at your current table (despite its obvious issues) and you can eat the rest of the meal that you already paid for, for free.

In regards to LEO more specifically, I would have to pay for token creation, enable staking, enable delegation on the LEO token itself and then all 3 of those again for both LEOM and LEOMM.

That ~4,300 HIVE won't break my bank, but I feel like I'm buying the same food twice (also worth mentioning is the ENG that I have purchased and staked, which I would now have to unstake on Steem, sell and then buy BEE at a 10x premium). 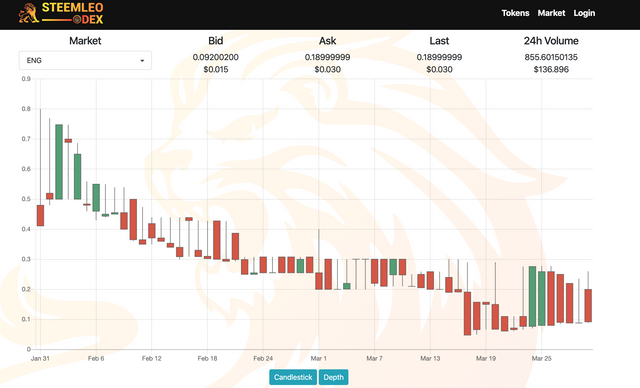 https://dex.steemleo.com/market/ENG - ENG price since January. Most tribe owners I've talked to (including myself) bought ENG for our tribes anywhere from 0.7-1 ENG/STEEM. ENG has since lost almost all its value since nearly the entire Steem community now lives on Hive

I don't mean this as an attack or disrespect in any way. As I said at the beginning, what Agg and Steem-Engine did for me and many others has my deepest gratitude. Paying 4,300 HIVE for these same features wouldn't kill me, this is just how I feel about having to purchase the same thing twice.

Looking forward to Wednesday's meeting at 1PM EST. I hope we get a good discussion rolling.