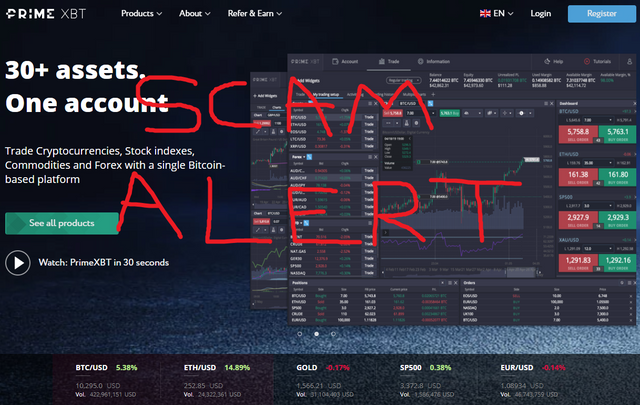 ( a screenshot from PrimeXBT front page )

Logged into PrimeXBT last night in order to do a bit of CFD trading on Bitcoin and was quite shocked to find I was greeted with a negative account balance on my trading account.. having previously used the site the day before and having only recently gotten a withdrawal from their site mere hours earlier it struck me as odd.

( a screenshot from PrimeXBT trading page showing a negative balance )

Contacted their support on the site and was told that in order to trade again I would have to pay the amount in which the account was negative. Upon further investigation it was claimed that the positions I had open were liquidated and that this was what caused this negative balance, the thing is, I had manually closed my position sometime earlier not anywhere close to being liquidated and requested a BTC withdrawal. At this time my trading account balance was at zero and no issues in the withdrawal were had. The BTC withdraw went through around was converted into STEEM via Blocktrades.us in block #40,726,864 and then reinvested into the bankroll at Steem-Roller.com. Support eventually said that they would email me once they figured out what the issue truly was in order to clear things up..

A little while later I get an email stating the following: 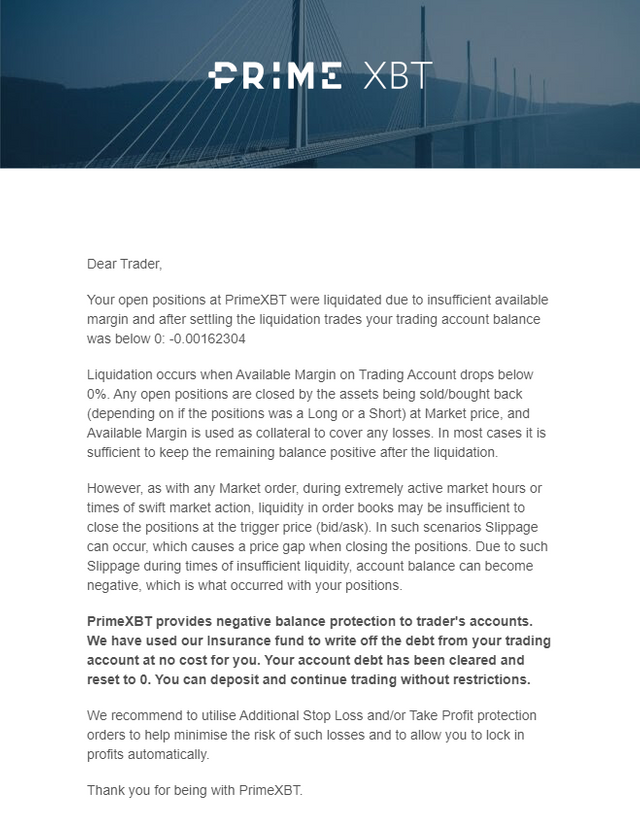 So the debt is cleared up, but they are still claiming that my position was liquidated (which it wasn't) and then chalk it up to possible price slippage or some crap like that. At this point in time I've got them going on record and claiming that the negative balance was caused by a liquidation that never happened, but they are willing to sweep it under the rug and return my trading account balance to zero so I can deposit and continue trading like nothing ever happened.. This doesn't sit well with me so instead of depositing again I decide to email them back saying that their making shit up and that obviously something is a bit off here.. My reply email is as follows: 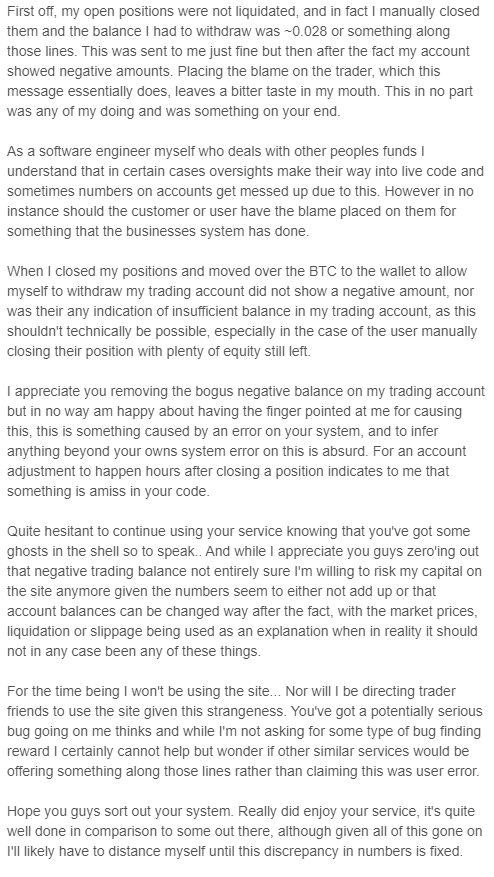 Now my reply must have struck a nerve or something with their customer service rep, because the email I get back from them is no longer them trying to sweep things under the rug but rather a show of their true colours, with them back-peddling on their prior mention of liquidation being the cause behind the negative balance error and them switching their story up to something different. On top of this they now begin to call me a thief and make an ultimatum stating that I have 72 hours to repay the bogus negative account balance. Instead of the negative account balance being caused by a liquidation that never happened instead they decide to try to say it has been caused by an "overnight financing fee" that was charged to my account after my withdrawal of BTC had taken place.. At this point things are starting to unravel for them, with the changing of stories and what is essentially an extortion attempt towards me to pay them for this supposed "overnight financing fee" which you figure would have been taken out of the capital (which wasn't in their service 24 hours even) I had on the site before they green lit my BTC withdrawal.

It's all in this email from them below:

At this point it becomes blatantly obvious that these people are trying to coerce me into sending them BTC for an error on their system, which they corrected, then went back against and changed the story in order to make it seem like I owed them money, threatening me with legal action if I did not pay them. Not sure about their country but up here in Canada we call that shit extortion. Not only have they flip-flopped a few times now on both the reason behind the negative balance but now also have flip-flopped on their stance that I owe them money. Not looking good on them at all. In fact at this point they are starting to look like fucking scammers. Rather than get spooked by their legal threats I respond to them stating that I know damn well that I have no liability in this matter and that their janky ass system is to blame:

After writing this reply I do a bit more research into them and see that they are operating out of Seychelles.. So I add in the little zinger below:

At this point in time I've received no reply from them nor has my account been closed. They will not be receiving another damn dime from me nor will I ever use their trading platform again and I also urge you to avoid using them as well. It's a damn shame as the platform itself wasn't the worst crypto based CFD trading site I've ever seen but given the absolute shoddy customer relations handling here and to top it all off them flip-flopping around only to attempt to extort BTC out of me for their systems error raises many red flags! Generally when a service has someone report a bug it's kind of tradition to thank then and perhaps offer a bug bounty rather than flipping out and saying you're going to pursue legal action against the user. Everything about this smells of a poorly run company with scammy business practices.


If you're using their platform I highly suggest you reconsider.. As it would appear that the people behind it aren't very honourable.
TL;DR CFD Trading platform made a negative balance on my account, making up 2 different stories why, and are trying to extort me for some Bitcoin..

Every Single Vote Helps, Thanks for the Support!
Need to get in Contact with KLYE?
Join the Official #KLYE Discord Server Today!