Hello, LBIer's. It's been 5-6 weeks since we looked at the LBI cubfinance wallet so that's what we are looking at today. We had been sticking to the plan of investing 50% of weekly earnings into this through the bLEO/BNB LP. 50% LEO funded from LBI earning and 50% BNB funded from harvests. Extra CUB harvests were being invested into the CUB/BNB LP. Around 2 weeks ago, an increase in LBI earnings and a decrease in CUBfinanace's has meant that harvested CUB will no longer cover 50% of LBI earnings so we've gone from investing and reinvesting to reinvesting only.

Why the change of plan?

Look, I dont wanna sound bearish on CUB but when it boils to it, CUB is a farm token. Most users strategy for farms is stake or LP proper cryptos like BTC/ETH/BNB or STABLEs, collect harvests, convert harvests to BTC/ETH/BNB or stables and add to their stake/LP position. When the APY drops, move it to another farm. Most users do not care about the future road map is that is going to be released in 3-6 months time. There is no ground level when 10 new boom and bust clone farms a day are being released, there's an airdrop are presale.

LBI has built up a nice wallet and it earns decent harvests to the tune of roughly 240 CUBS per week. Used to be more, used to be worth a lot more $ but even at today's prices that's $120 per week. My thinking is, it's time to diversify a little, we've built up a decent wallet that could easily grow into $20,000+ if the crypto market recovers and it's time to build up to something else that has the potential to be worth $20,000 someday. I dont know what that is yet but it'll come and when it does, it would be cool if we had some liquid assets to part with. If CUB were to increase and moon back to $3-4, our wallet value might not increase that much but APY's across the board would increase. Our bLEO/BNB LP value is not influenced by CUB's price but its APY is. 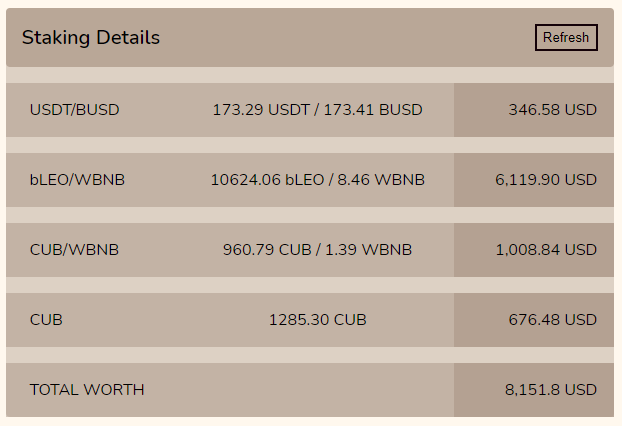 I have already started this around 2 weeks back by getting us involved with the BUSD/USDT LP. Im aware the CUB farms will soon become non-active but the swap over to values has not been announced yet so we have weeks/months until it happens. As an investor, I like the pay-once model farms offer. Vaults are good I guess for the semi-auto compounding part but I like to pay the fee once. I've been converting harvests into stables and staking them as an LP that's earning about 30% per year. The harvests are rubbish and have only been claimed while adding more but the way the market has been, it's a small stepping stone to a crypto market hedge. Building this up to $500 would be ok just to have, after that the focus will be on either the BNB/BUSD vault or using a different farm. In an effort to save on fees, I've only been harvesting every 5 days are so and only when there's over $20 worth of CUB to collect.

That is pretty much it. Im seeing BTC is up 11% at the time of writing so that's bullish and it'll be interesting to see what CUBfiance total locked value grows to if the bullrun is still on and how that affects the price of CUB. Anyways the fund we have in here are there for the long term. We might get involved with other farms in the future but they will not be funded from this balance. Why not? Building wealth is not the same as swapping it around a bunch. We have a nice CUBfinanace wallet (stack), lets sit on it, collect our divs and start to build the next stack. Start every new investment fresh, dont fund them from investments we already hold. Of course, this is not a rule of thumb as sometimes you have money that you need to reinvest but you get the basic idea, build up and dont spread thin. Maybe that still does not make sense, it makes sense in my head and on that note... 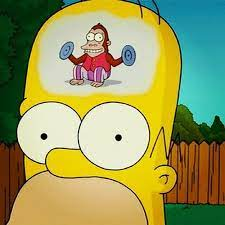 ...thank you for reading through today's LBI CUBfinanace update. We hold strong but we're not investing anymore but still reinvesting through stables LP's. Slep the upvote, if you enjoyed this post, slap it an upvote get into trending posts and leave a comment with any questions, is the feedback you have.