Should we? or should we not?

Hello, hello, hello. Today we are going to look into how LBI token issuing has been going since we increased the price from 1 LEO to 1.1 LEO around 11 days back. We are still issuing some tokens but nowhere near the same amount as before. Let's look into it.

I do not have all the exact numbers at hand and im not going to dig them out because I know they are small numbers. Off the top of my head, I would say that we are currently issuing 2-15 LBI tokens per day. I did expect for people to buy less but it looks like everybody's wallet are filled as token issuing has flatlined. 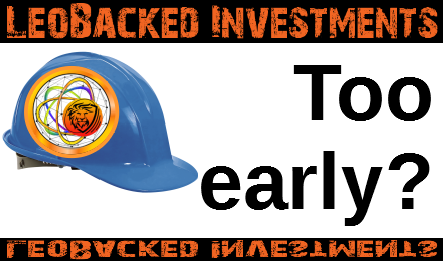 What does this mean?
I think it means we have to look into hard capping the token. This seems very premature to me as the project is only 3 months old but if people are not buying because they either have hit their LBI target are think it's expensive now it's 1.10 LEO. We all know some are holding off to get airdrops but i dont think that factors in that much.

There are currently 217,920 LBI's in circulation. When content team rewards are considered, a hard cap of 272,400 would be our final number. Please keep in mind that the content team rewards are only distributed when performance targets (price targets) are hit. This ensures your investment is worth more before we get rewarded. Issuing a total of 220k would land us on a hard cap of 275k. Issuing 240k would land us on a 300k hard cap. Could we issue another 22k LBI. Seems like a lot.

There is no boat to miss

I could flip a coin on hard capping because it's still very early on. People maybe think it's expensive now and they missed out. You know, for the past 12 months, I had many people say to me "I'd like to buy some SPI (hive-engine token) but I think I missed out" They told me this when SPI tokens were 2 HIVE each, and 3 HIVE and 4 and 5,6,7 HIVE but they dont understand the token concept and that's why they think they have missed out. I try to explain but they dont listen and I give up. The same thing will happen to LBI. People think it was only 1 LEO a few weeks back, now it's 1.10 LEO, damn I missed out. WRONG!!!

If you understand the concept, you'll understand there is no boat to be missed. Getting in at any time is pretty much the same for something that only increases in value. If you told someone you had put $1000 in a bank account 20 years back that pays 5% a year in interest and now you have $2000 and they replied back, I'd like to get into that but I think im late to the party. You think of them as pretty stupid right?

LBI is valued in LEO, taskmaster4450 wrote about this yesterday. We earn curation and content rewards in LEO. When our LEO holdings only increase, the price of LBI price will only increase. Same as when you save fiat with the bank and they give you back more fiat as interest, your bank balance only increases? right?. The same thing for LBI but with LEO tokens instead of fiat, replace interest from the bank with LEO curation and content earnings. LEO is a base currency for LBI. I know im preaching to the choir here but if only 1-2 people can understand this better, it's worth putting in a post.

My point is the LBI token is never overpriced. There is no boat to miss and it's never too late to join the party. We have issued a lot of tokens and my guess is everyone has what they want. We did announce the project 3 weeks before launch and people had saved their LEO waiting for it. I'd personally like to see if we can issue out another 22k and aim for a 300k hard cap.

Things to consider before we consider hard capping
Just throwing these thoughts out there but I saw a recent post from Aggroed where he outlays a few plans and new features for hive-engine. One of the future services they aim to provide is a token wrapping service meaning LBI could be traded on Uniswap. For what propose?, I do not know but the option is there and we might wanna hold back some tokens for that. We can always burn tokens but we can't create anymore.

Another thing to consider is new people are joining LeoFinanace every day and we might not be able to issue many tokens today but in 6 months time our chances might improve. We could consider a soft cap of the token and putting LBI token issuing on ice for 6 months. After 6 months, we'll have lots of new faces eager to get involved and project blank will be released and some people might reallocate some of their LEO to LBI.

Hmm, that pretty much all I can think of right now. Im, sure there would be other reasons but none are coming to head.

What do you think about hard capping the token? There is no planned vote for it are anything, just some casual feedback required to give an idea what token holders are thinking.

Oh, and BTW, I'll not be hosting any further LBI votes as we have selected our Governance team. Its was announced on discord but I think there are only around 30 members in there so far. Here's an invite to the LBI Server. I could tell you the 3 people in the team but I'd rather you click the link and joined the server, haha. It's the last post in announcements.