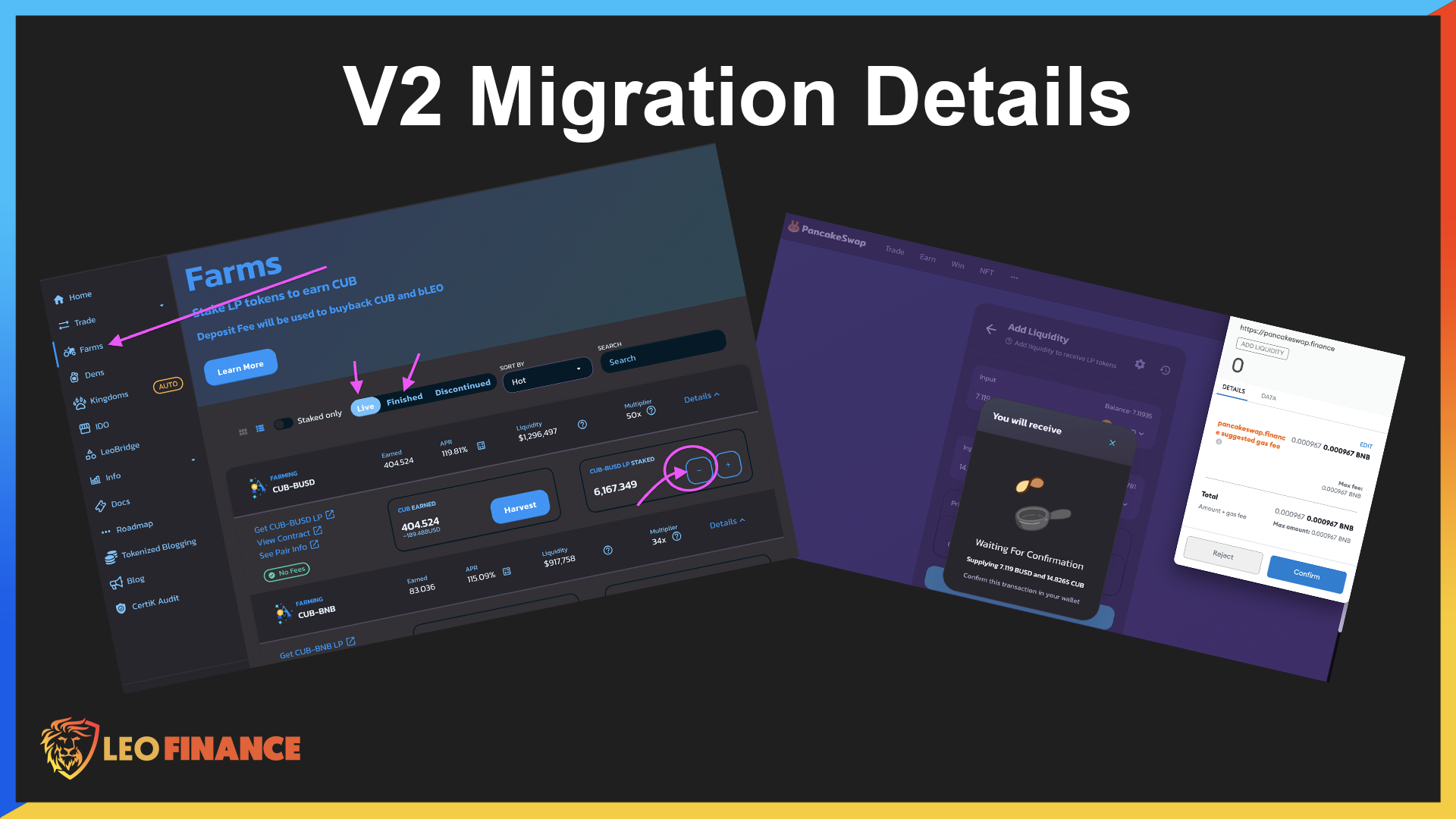 Hey everyone! It's been a long-time in the making and we are finally making the leap to V2. The migration has begun with the first major step today: queuing the update in the CubFinance TimeLock. Once the 24 hour period has elapsed, the user part of the V2 migration (when you have to unstake, unpool, repool and restake) will begin!

This migration marks an important moment in the CubFinance history books. We're not only migrating our liquidity, we're migrating the vaults that earn CUB and seed liquidity. We're also prepping bLEO for the migration to V2 which includes LeoBridge.

The LeoBridge system should be far more reliable (and include lower slippage) under the V2 LP contract.

All of this sets us up nicely for our current and next major rollouts:

Why Migrate to V2?

This has been covered in a number of places. In a nutshell, V2 is where everyone has been migrating on BSC for the past several months. V2 has a few features that make it superior to V1 and then you add network effect (more liquidity) into the mix and the reasons to migrate become obvious.

As of today, our migration has already begun! There are quite a few operations going on to make this migration possible. The first step was to prepare our frontend and backend for the migration.

As of this post going live, we've done the next step: queue the deprecation of V1 vaults and then queue the addition of V2 vaults to CubFinance. This includes:

24 hour countdown: when CubFinance started, we hired CertiK to perform a deep audit on our platform. From this audit, we worked with their team to make CubFinance as secure as possible. One of the many things we added was a TimeLock smart contract to our MasterChef for Cub vaults.

This TimeLock SC creates a 24 hour countdown period for any changes we want to make to the platform.

When we say "Queue Transactions", this timelock is what we're referring to. In order to make a change, we have to first queue the operation into the timelock. We can then execute that change but ONLY after the 24 hour period has elapsed.

As of this post, we've queued the transactions to migrate to V2. This means that the countdown has begun and roughly 24 hours from now will be the next phase of migration...

You will need to migrate liquidity if you are in any of the following liquidity pools & CubFinance vaults:

The migration for users will begin as soon as these vault TXs are executed (about 24 hours from when this post is live).

We'll release a number of tweets and posts (and a docs update) to aid you in this migration and inform you of when user action is required.

How Users Do Migration?

Note the farms page has a "Live" and "Finished" Tab toward the top. These two tabs are used to toggle between... live and finished vaults!

As of this writing, the CUB-BUSD, CUB-BNB, bLEO-BNB, DEC-BUSD V1 vaults are still considered "Live". Once the migration for users is in progress, these V1 vaults will be moved to the "Finished" tab and relabeled to indicate "V1".

When we announce the migration, you'll find the new V2 vaults on this page and V1 on "Finished". When you see new vaults on Farms, you'll know that the Migration is officially in progress for users. 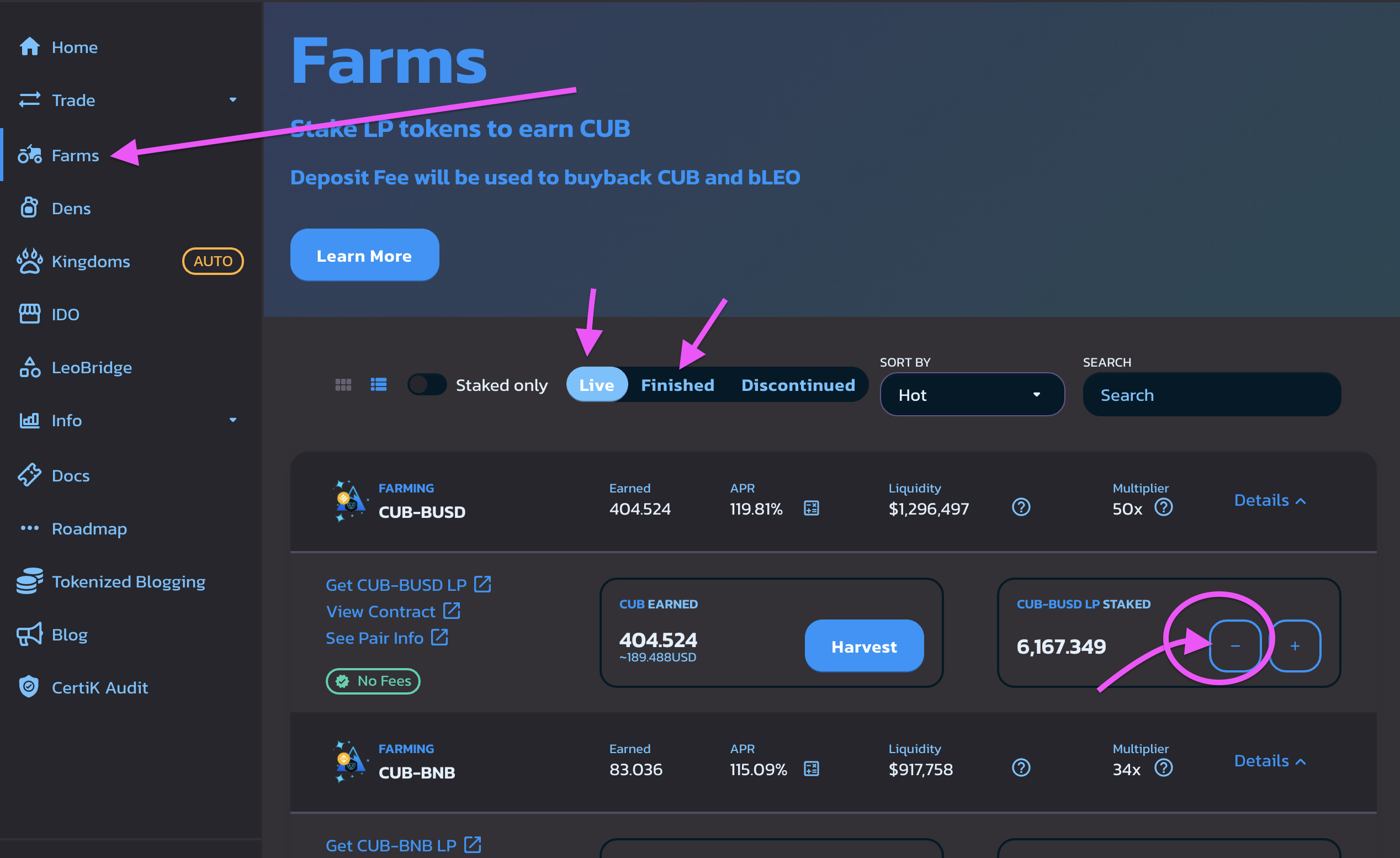 Many have asked "why do I need to unstake?" - LP'ing on CubFinance involves two types of deposits:

First you pool liquidity (on Pancakeswap), then you deposit the LP tokens you receive in a vault - known as staking.

Thus, the first transactional step to migrate from V1 to V2 is to unstake your LP tokens so that you can (in the next step) un-pool those CUB-BUSD and migrate them to V2.

It's time to get those liquid CUB and BUSD (or bLEO, BNB, DEC) back so that you can repool on Pancakeswap in the next step. 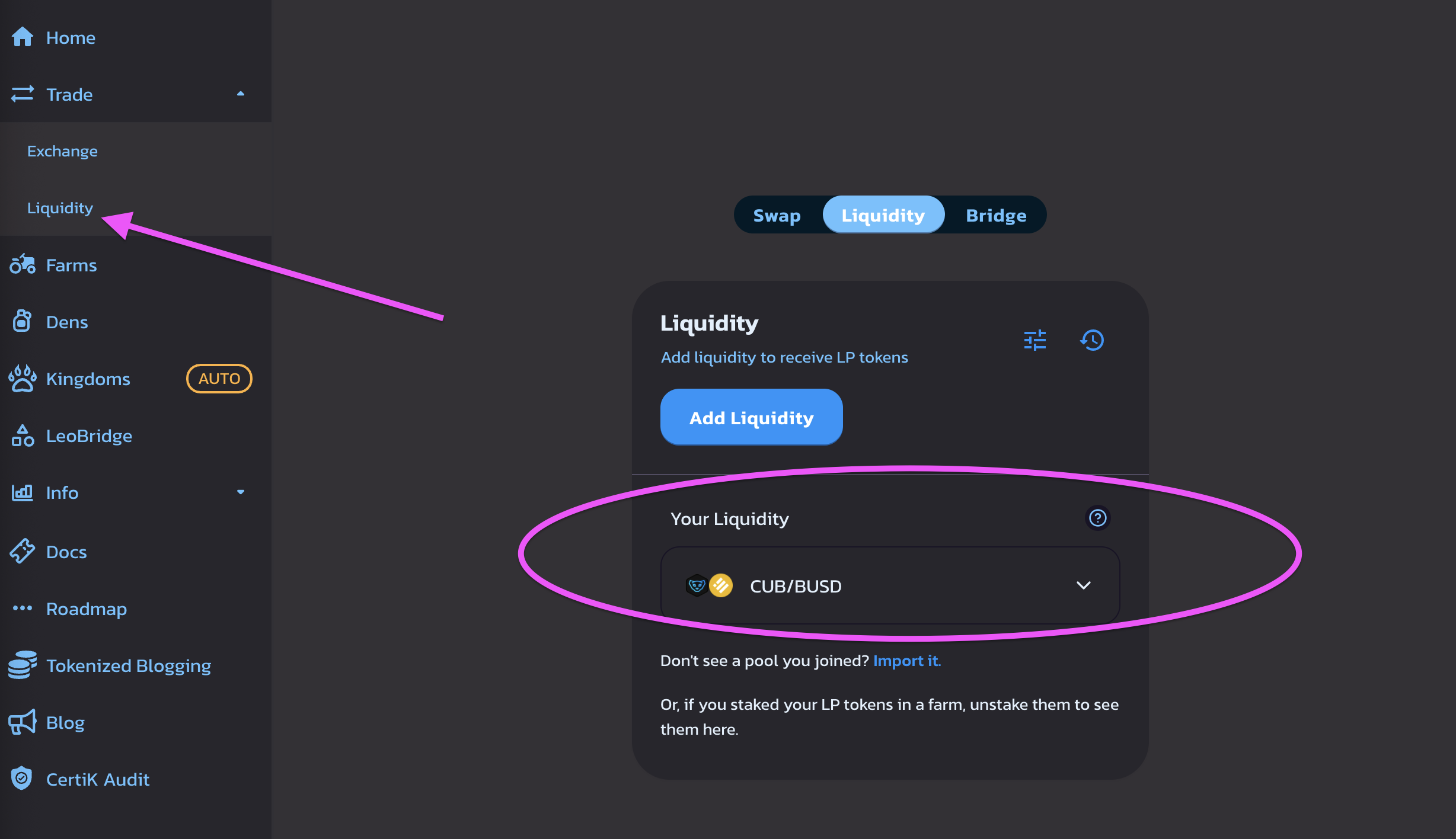 Visit the Liquidity Page on CubFinance and then wait for your Liquidity balance to show.

Note: you MUST follow Step #2 before your liquidity position will show on this page.

Once here, click the drop-down and then select "Remove" to remove liquidity from V1.

Step 4). Approve & Remove Liquidity Pairing on V1 to Prep for Repool on V2

Time to approve and remove that liquidity. Make sure to do Max (obviously, you'll want to remove 100% of your liquidity and then repool 100% back on PCSv2).

Note: the Approval for this TX is actually just a text signature. You won't need to pay a gas fee for that approval.

Once approved, the "Remove" button will light up and then you can un-pool the tokens. 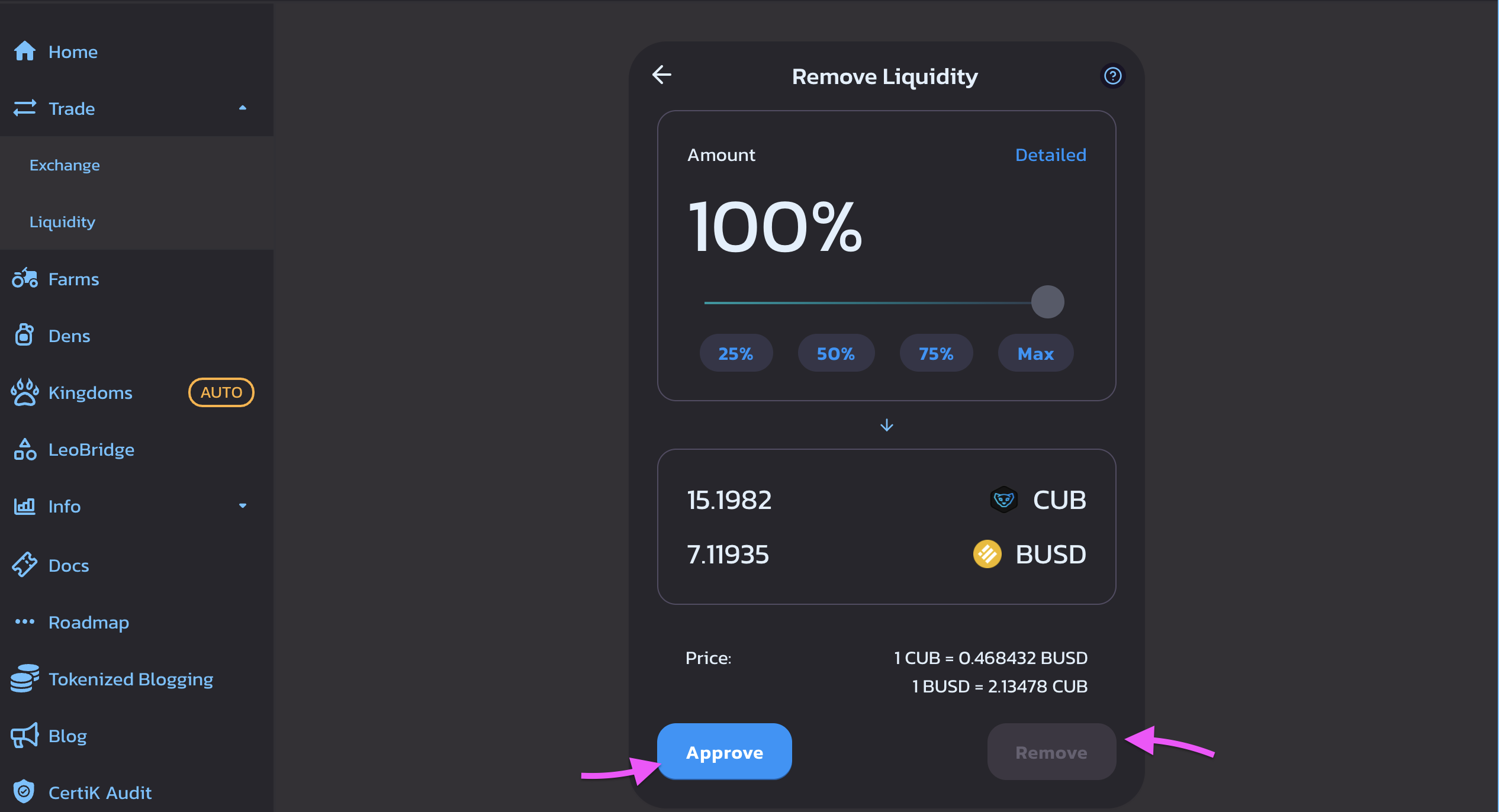 How to Find the PCSv2 Page:

Our CubFinance V2 AMM page will most likely not be live on the day of liquidity migration for users, there are direct PCS links that can get you to the same spot.

In many cases, this will actually be easier for everyone since you won't have to worry about the V1 to V2 AMM difference (i.e. we'd have to create a separate domain to handle the V1 old pairs - which may be confusing for people right off the bat). We've decided to go ahead and leave the old AMM up for the beginning and direct people to PCS to add liquidity for this week's migration.

Note: these direct links will also be available on the day of user migration via the vaults on https://cubdefi.com/farms. All the V2 pairings will have a "Get CUB-BUSD LP" link to these direct pages where it will prefill the tokens for you.

When searching for a token, you can add the token contracts directly in. This will make it easier for you because it will actually pre-load CUB, BLEO and DEC into PancakeSwap for you future use. 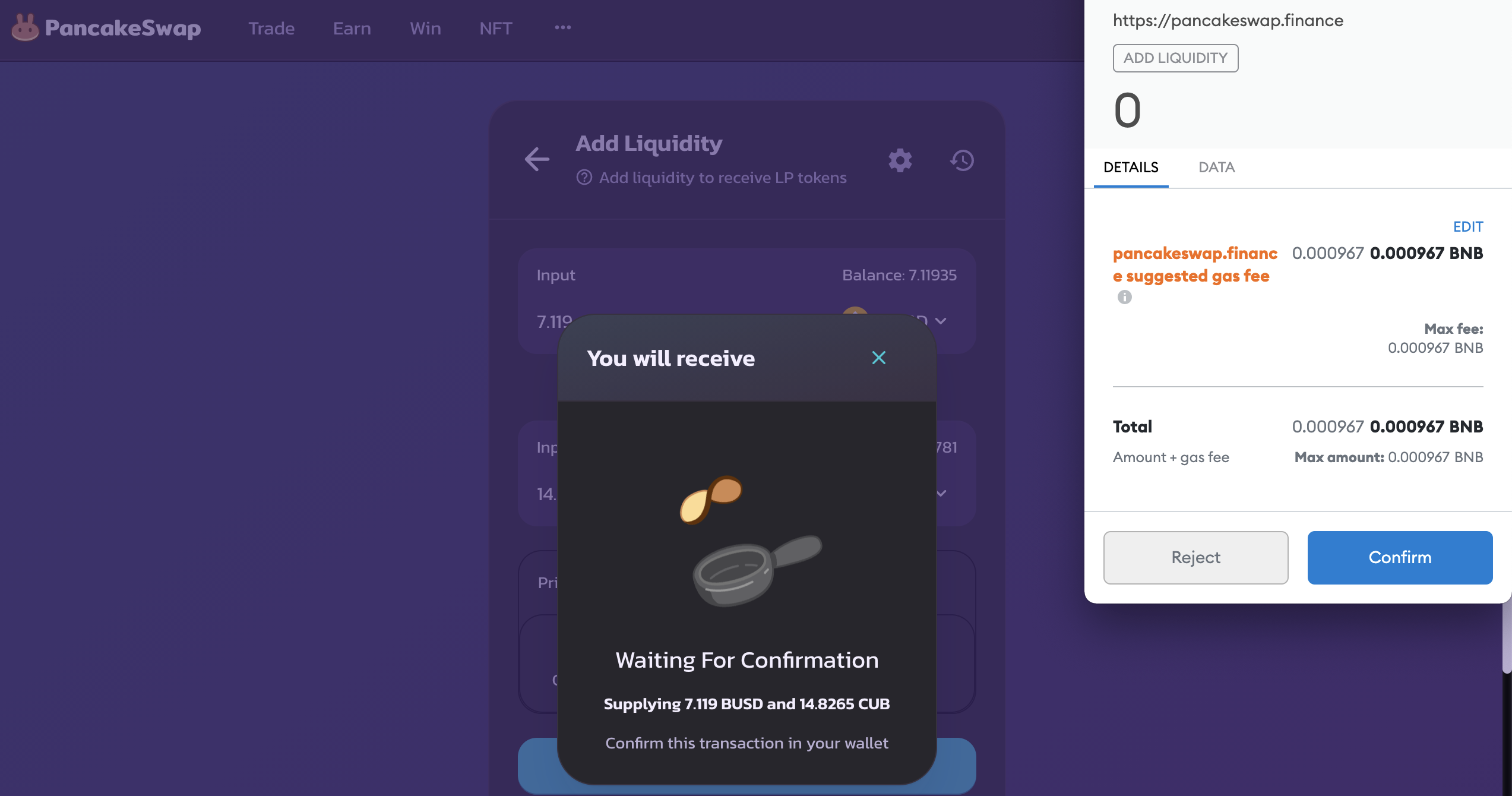 Once confirmed, you now have LPv2 tokens! Head back over to https://cubdefi.com/farms and find the V2 vaults (again, on migration for users day, this vault will be located under the "Live" tab and we'll label it V2!).

All Done! Congratulations, You've Made it to V2!

The only fees for migration will be transaction fees. We're deploying another 0 deposit fee day for all of our users to re-enter the V2 pools without paying any fees.

In order to smooth the transition, we'll leave this day open for 48-72 hours and make sure to make a lot of noise about it so that our users have time to make the change to V2.

The Other Reasons V2 is Important..

We're working on a lot of important features and partnerships for CUB. All of these rely on us making the leap to V2 first.

We pushed off this V2 migration until it became an absolute necessity because V1 worked fine for us and didn't cause any problems before. It allowed us to operate without much hinderance at all and we knew that the migration would cause a great deal of headaches for a few days while our users adjusted and migrated.

Now that we've got Kingdoms (already on V2), CUB IDOs (already on V2), IDO Partners (all planning to use V2), Polygon CUB on the horizon, massive LeoBridge upgrade, the vCUB DAO launching in the very near future and a few more massive feature rollouts before the end of 2021, it has become an absolute necessity to make the V2 leap.

CUB is living in exciting times. Prices could be better, but price can't be the only dictation of reality. Oftentimes the best opportunities are found when there is blood in the streets.

We're excited to deliver some incredible features for CUB throughout the rest of 2021 and in 2022. CUB is aiming to be a one-stop shop for DeFi. Allowing users to build a diversified liquidity portfolio (Kingdoms), find new projects and decide if they have a future (IDOs), vote on proposals, IDO requests and feature releases (vCUB DAO), bridge to Polygon and other blockchains, and so much more!