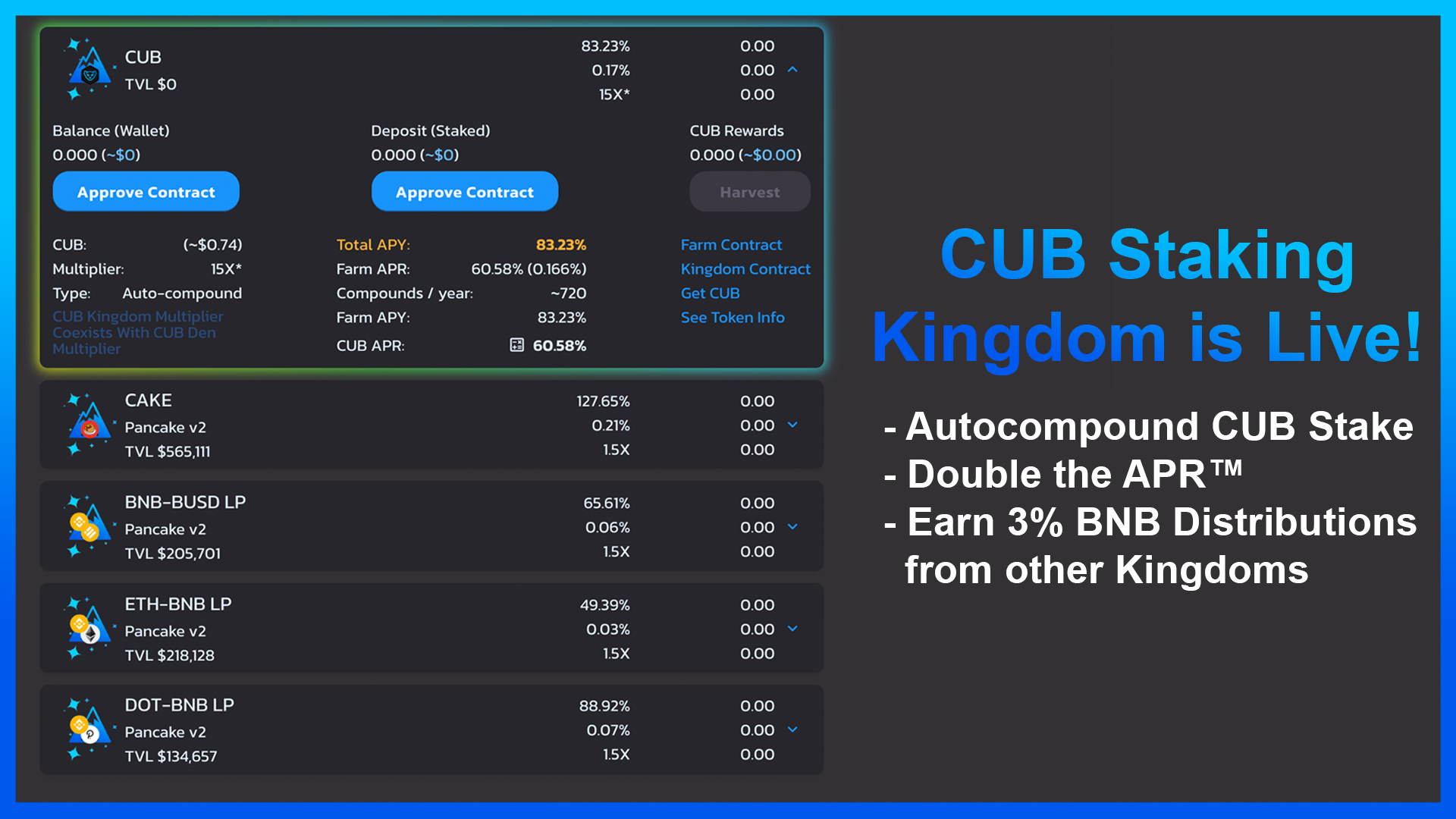 It's time to unveil the bread and butter of this Kingdoms migration. The CUB Staking Kingdom is now live!

Many have stuck with Cub Finance as we have grinded through some tough developments in order to migrate our entire platform tokenomics and farming structure. In the Last Team Update, we discussed the migration of CUB from "Goose-style" to "Autofarm-style"

The key differences were laid out in detail throughout that post. We'll reiterate the key points here:

The CUB Staking Kingdom changes the entire incentive and utility for hodling CUB.

What is the CUB Staking Kingdom?

Launching today, the CUB Kingdom allows you to stake CUB by itself in an autocompounding yield vault. There are 4 main characteristics of this Kingdom: 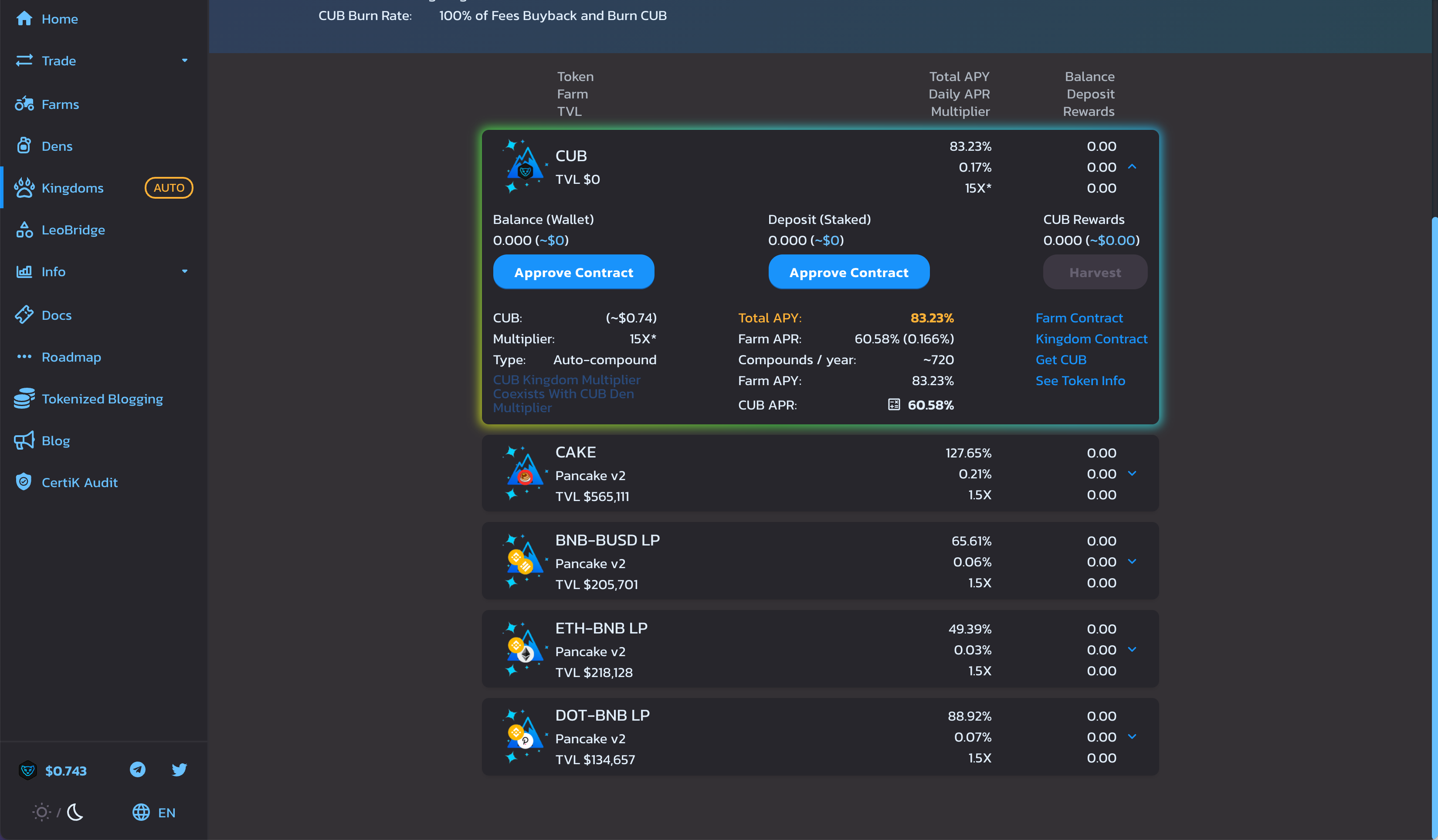 Having a single asset CUB Kingdom is extremely bullish for CUB. Through the other characteristics of this vault, there is an incredibly deep level of utility being added to this vault. As the Kingdoms migration continues, old Farms/Dens will be deprecated.

You may have noticed that the current multipliers on non-CUB Kingdoms is 1.5x. Most Farms/Dens currently have anywhere from 2x - 6x.

Many have expressed confusion about the CUB Den vs. CUB Kingdom and if there will be additional multipliers added to bring rewards to the CUB Kingdom.

The CUB Kingdom works similarly to all of the other Kingdoms: you deposit CUB and pool it in an "external" farm and earn from the rewards pool of that target farm.

Think about the CAKE Kingdom: you pool CAKE on Cub Finance and then earn CAKE from the PancakeSwap rewards pool for their CAKE "den".

The same mechanism governs the CUB Kingdom contract. When CUB is staked in the Kingdom contract, it is autonomously pooled in the normal CUB Den and earns from the 15x multiplier designated to that Den.

This means that no additional multiplier is needed for the CUB Kingdom. It earns the same multiplier from the CUB Den. The key differences between the CUB Den and CUB Kingdom are being outlined here in this post (Autocompounding and BNB Rewards from Management fees on Kingdoms).

At the end of the day, it will make little sense to utilize the CUB Den over the CUB Kingdom. The contract will compound your CUB at a more optimal rate than you can do it which = a higher APY. The Kingdom BNB Dividends will only be allocated to the CUB Kingdom (not the den itself) so that also will add signifcantly to the APY of staking CUB in the Kingdom.

Kingdoms contracts are cross-composable, autocompounding contracts. This means that they autonomously take the earnings of the "external" (in CUB's case, internal) platform's rewards and autocompound it back into your base asset position.

When you stake BNB-BUSD in the PCSv2 Kingdom, then you're earning CAKE rewards from PancakeSwap. The Kingdom contract takes the CAKE you earn and sells it for BNB-BUSD LP tokens and then re-stakes those LP tokens into your base position + pays you a small portion of the CUB Rewards Pool to further deepen the APY for staking in Kingdoms.

Earns BNB Dividends from Management Fees on Other Kingdoms

Kingdoms like BNB-BUSD, CAKE, DOT-BNB, ETH-BNB and the other vaults we develop earn "off-platform rewards".

The 4 vaults above are all PCSv2-based. This means that they earn CAKE from Pancakeswap and then autocompound that CAKE back into the base asset position.

During the autocompounding process, a management fee is taken from the total CAKE harvested (and the other tokens we harvest with future Kingdom vaults).

We're introducing a new structure for management fees where a % of them get distributed to CUB Kingdom Stakeholders and another % autonomously buys and burns CUB.

We've been testing the ladder part of these fees with the current Kingdoms setup and things are going smoothly. It's time to implement the new fee structure we've created and start paying BNB dividends from these harvests as well.

In one of our upcoming blog posts, we'll discuss this fee update in more detail. For a high level overview, it will look like this: 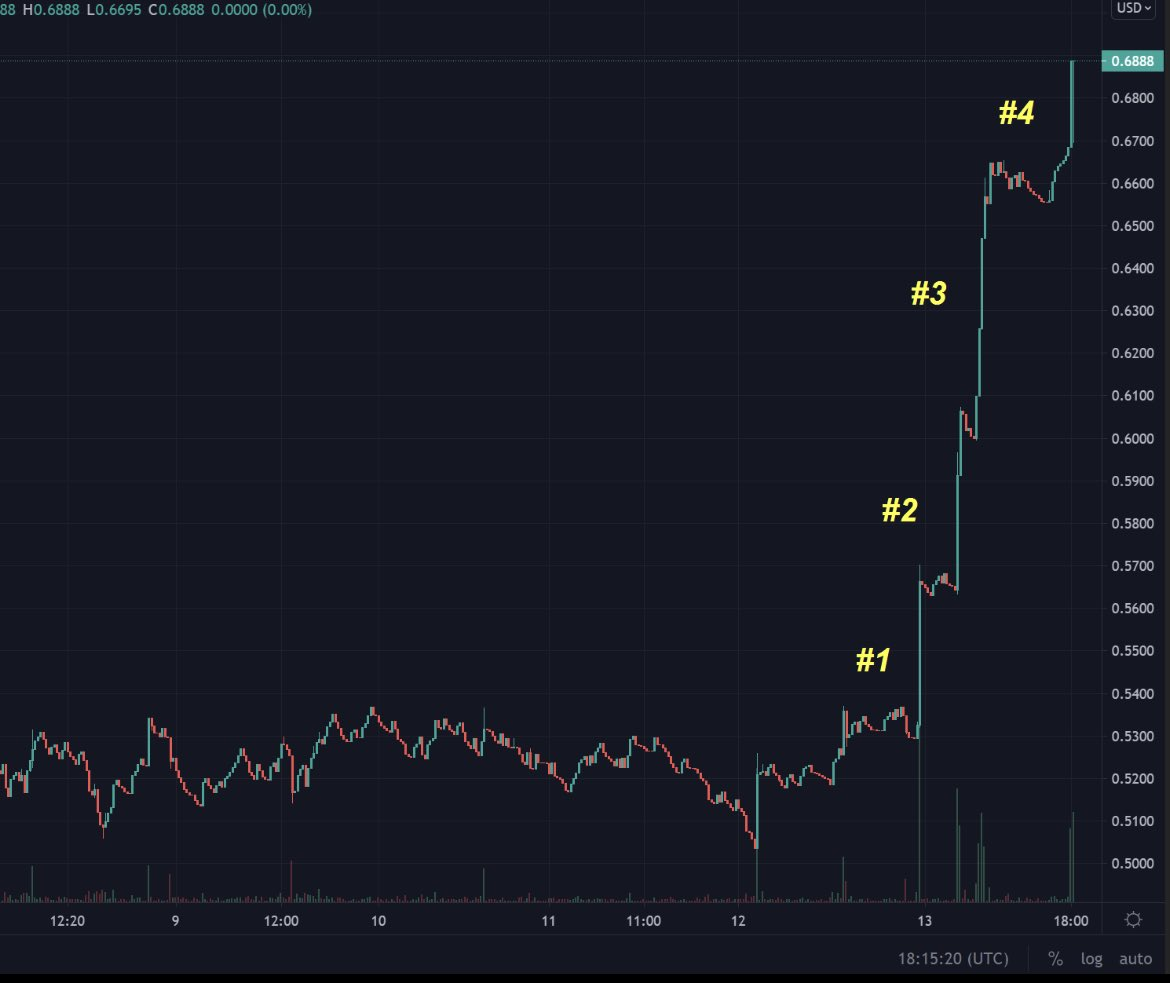 The Trend is Already Changing #Kingdoms

Many have started to realize the value of migrating CUB to this new structure that we've been developing for quite some time now. CUB's price bottomed out at $0.50 and has started a dramatic climb already on the news that the CUB Staking Kingdom was going to be released in the near future.

Increasing the buying pressure for CUB is done primarily through:

We've already seen the result of some of this increased buying pressure. Just a few days ago, CUB was bought up from $0.50 to $0.72 in less than a few hours.

Even though the CUB rewards on vaults are decreased in Kingdoms, you'll notice the APR/APY of Kingdoms is actually higher than the original farms/dens. We're able to achieve this via cross-platform composable contracts. Our contracts farm on another platform (i.e. Pancakeswap) and bring value back into the CUB Ecosystem via CAKE rewards on those assets.

There are a number of other amazing developments lined up for CUB and LEO. The key focus right now has been to migrate CUB into a more sustainable tokenomic model and it's already yielding amazing results. Since the we migrated DOT and ETH-BNB, we've seen a major decrease in the amount of CUB sold on the open market.

As the final vaults are migrated and the CUB Staking Kingdom gets a drastic APR boost, we think CUB is going to see an entirely new trend. It's going to be a fascinating thing to watch, especially as our other projects gain traction simultaneously (LeoBridge's volume is increasing dramatically and our Polygon platform tied to the CUB hodlers is about to launch).

The private investor conference with over 100k attendees mentioned on LeoFinance's Twitter account is currently underway and some new blood is being onboarded into the DeFi space via Cub Finance, LeoFinance.io and LeoBridge. More details on how this is going.. soon™️.

This new model brings a depth of utility to staking CUB in the Kingdom that didn't exist before. As the Kingdoms migration continues, the freed up multipliers will make their way to the CUB Den (Kingdom). When the migration is complete, the APR for staking CUB will 2x and the APY will be even higher due to the optimal compounding rate + BNB Management Rewards.

lol. Have you dived into the Den yet?

I had some cub in the Den, so I took it out and put it into Kingdoms. Auto compound is superior :D

AHHHH we finally hav eyou onboard ! Welcome home

6min after the Leo post. I had some Cubs in the Kingdoms a long side my Cake :p

Are Leo burns still a thing on cubdefi, or is it just cub from now on? Previously it was 80 % fees to cub, 20 % to leo (or something like that) but now it seems its just cub and bnb buy backs if i get it right

Same question I have

There are still buyback and burns of bLEO (LeoBridge, Deposit Fees, etc.) the change to Kingdoms has automated the burning of management fees as CUB. Kingdoms have a new dynamic for burning but the other mechanisms remain the same.

There's a post about to drop this week which will discuss LeoBridge and the changing landscape for the LEO token as we've brought on more developers to continue the work on LeoFinance.io and LEO as a blogging economy.

On top of that, LeoBridge is picking up steam. The majority of value for LEO will derive from LeoBridge. Not necessarily from the buyback and burns (which is already over 1000 LEO), but primarily from the Trading Volume it generates.

Check out this tweet thread about LeoBridge to get an idea of what's happening to the LEO Token economy as it evolves and we grow LeoBridge's volume:

Thanks Khal! Let's keep crushing it

This is awesome. Thanks for the heads up. I am really excited to keep growing my stake over on CUB!

Awesome guys!!! My Cubs are safely transferred from Den to the Kingdom. :')

My CUBs love their new crib. Won't be long before we all start saying...

Hahahaha! Sure. Maybe in 2 months or 2 years. But we will reach there.✌

Just shifted to the Cub Kingdom. Auto-compounding is a massive part of why I prefer it over the Den and the BNB rewards are just the icing on the cake.

Success! I am in. #CubAutofarm

"At the end of the day, it will make little sense to utilize the CUB Den over the CUB Kingdom. The contract will compound your CUB at a more optimal rate than you can do it which = a higher APY. "

If you say so @leofinance , so I have partially removed some CUB from the Den and moved them over to Kingdoms. Should I just move it all?

I moved all mine over to Kingdoms.

Should I just move it all?

now I think i don't have enough cub :D

I knew this would happen. I thought about it, I wrote it and now it happened I "shoulda coulda" have bought more CUB ...

i bought every dip :) But you now, looking back i always want more cute lions :)

awesome. what we have all been waiting for. Great of you to clarify the difference between cub den and cub kingdom. Almost thought they were the same

great and I joined cub kingdom.