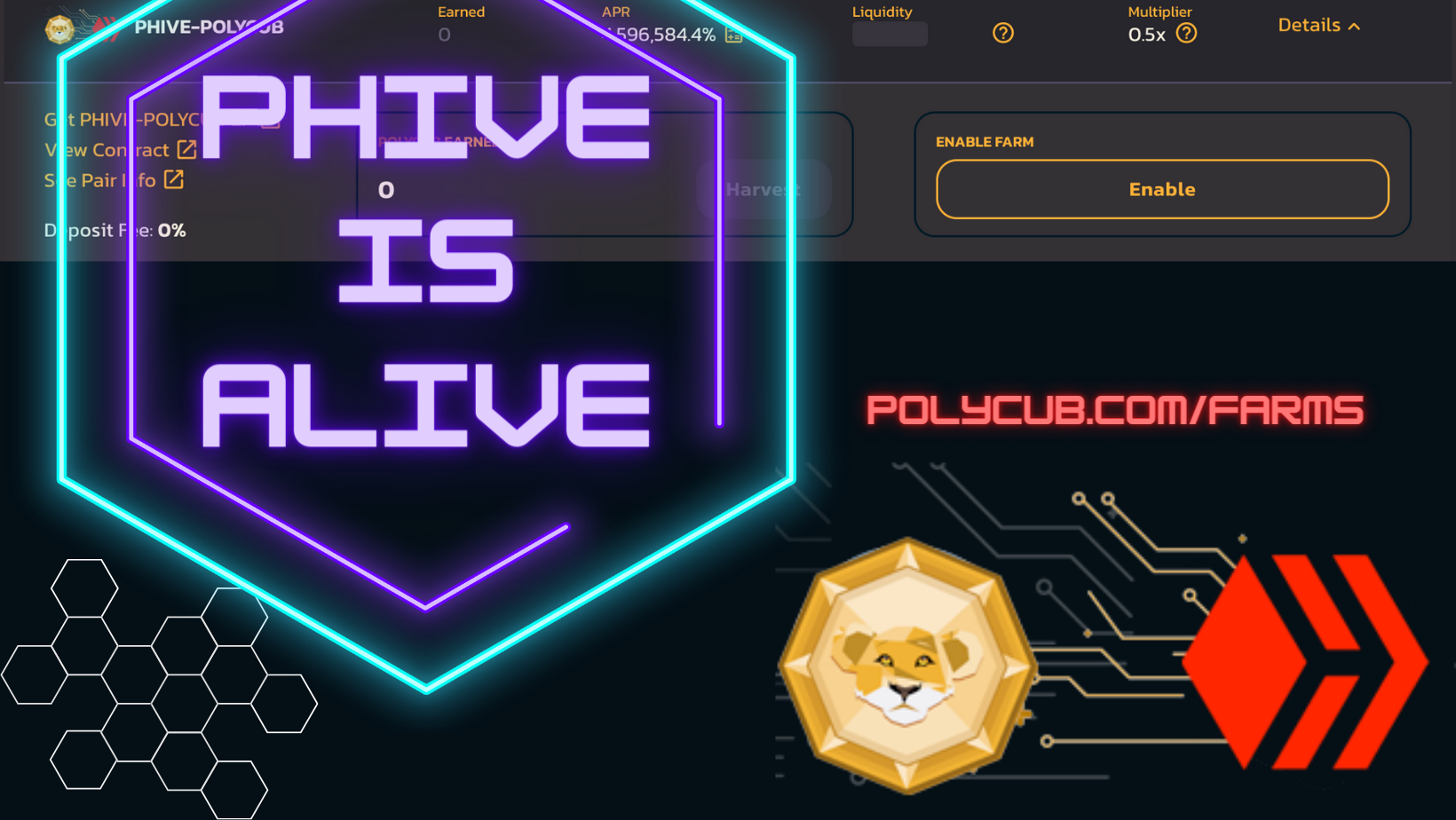 The mission of LeoFinance as a Web3 Ecosystem is to democratize access to financial knowledge and opportunities. With pHBD (launched 2 weeks ago) we aimed to solve the #1 issue facing mass adoption for HBD: onramp and offramp liquidity. pHBD is already at $370k in liquidity and continues to rise each day.

pHIVE is our latest branch from Hive to the Polygon Blockchain. pHIVE is the wrapped version of HIVE and is 1:1 backed by native HIVE on the Hive blockchain.

Creating a deep pHBD and pHIVE pool is one of our core focuses right now. After launching pHBD, we realized that there is massive value for the Polycub Protocol if we allow our multi-token bridge thesis to play out. pHBD generates a ton of wrapping fees, arbitrage revenue and overall value accrual for the PolyCub protocol. In exchange for this value accrual, PolyCUB protocol pays POLYCUB to all liquidity providers on https://polycub.com/farms.

When we launched pHBD, our vision of vaults on the platform was radically reshaped. In the first day, pHBD generated more protocol value accrual than all Kingdoms combined at the height of TVL ($6M+). This showed us the future of the platform in a completely new light.

Instead of offering "V1" vaults (Kingdoms) that only had 1 method of value accrual, we saw that the future was in deploying these V2 vaults that offer PolyCUB 5 methods of Value Accrual.

How to Wrap and Unwrap pHIVE

pHIVE is 1:1 backed with native HIVE on the Hive blockchain. You can get pHIVE by wrapping native HIVE into pHIVE using https://wleo.io: 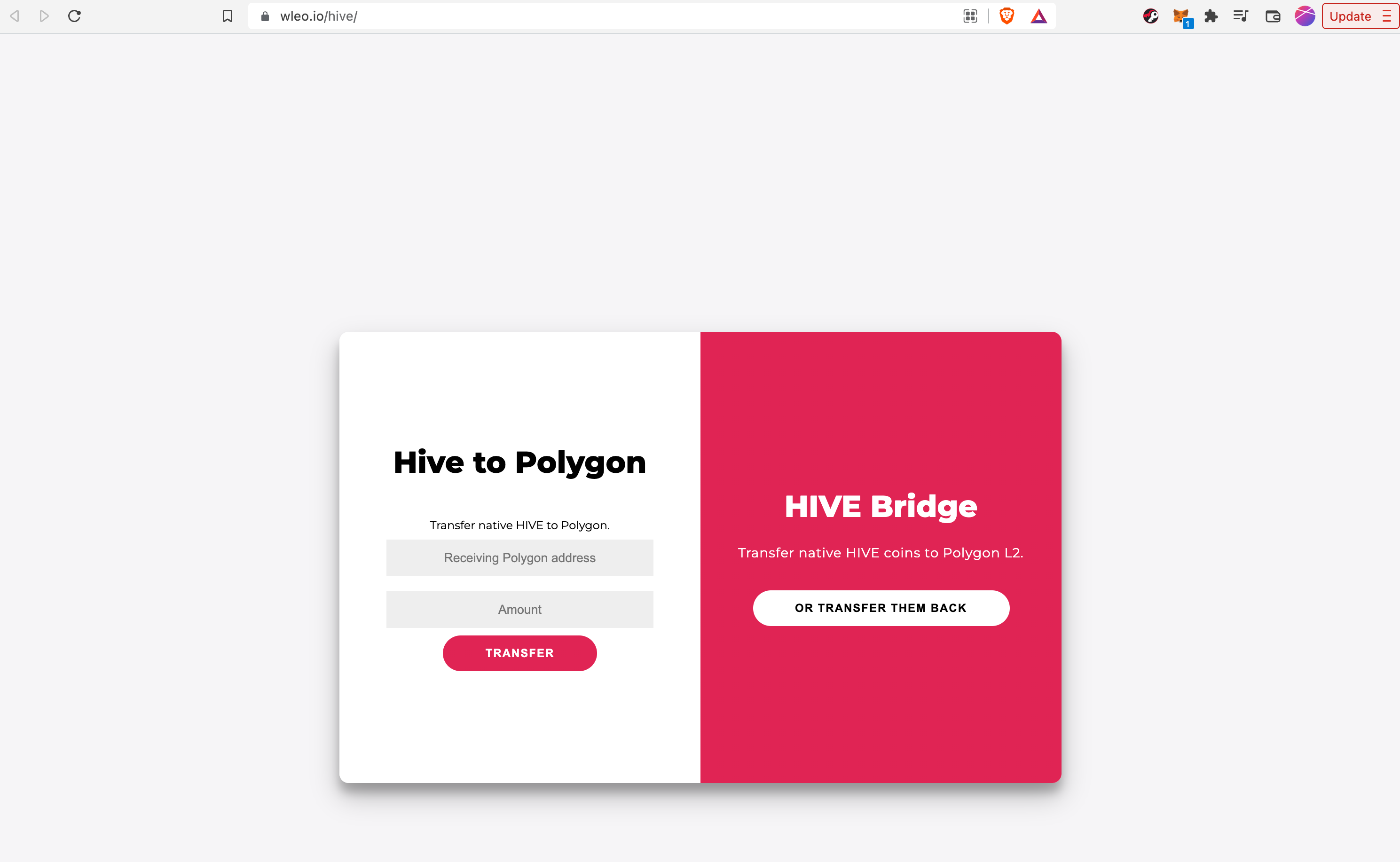 How to Provide Liquidity and Earn Yield on pHIVE

Yields are going to be incredibly high as people compete to get into the pHIVE-POLYCUB vault to earn. You can join this vault by providing liquidity to pHIVE-POLYCUB:

V2 vaults offer a glimpse into the future of PolyCUB. We're building the most sustainable DeFi platform on the planet one step at a time. V1 vaults only had 1 method of value accrual while V2 vaults like pHIVE-POLYCUB have 5 methods of value accrual.

The excitement over the launch of pHBD and pHIVE has been incredible. We're offering the opportunity for Hive to get into the hands of a whole new generation of Hivers.

Hive is an incredible ecosystem. One of the things that it lacks is simply awareness about how awesome it is. Our goal is to change that.

The LeoFinance community will undoutedly release dozens of tutorials and explanations about pHIVE. We'll edit this post and link the best ones here so that you can learn about how to use pHIVE and why its such a massive opportunity for PolyCUB and Hive.

Great.
This is what asked days ago about adding Hive to Polycub.com when you guys added HBD.
Happy to see Hive added as well.
More utility for Hive :)

How will the price fluctuations of HIVE and POLYCUB affect the mechanics of this liquidity, both tokens being very volatile?

That’s a great question! Volatility will actually have a massively important impact: the volatility creates huge LP trading fees which will make the APR for being an LP highly attractive.

On top of that, the volatility will lead to a lot of arbitrage volume which ultimately drives value accrual to POLYCUB. Since pHIVE is paired against POLYCUB, that will mean that the pHIVE-POLYCUB pair will get more and more valuable with time as it’s paired to a scarce asset accruing value from 10 V2 vaults like pHIVE-POLYCUB

Good to read this explanation. It really soothed my worries. In fact, I just noticed that POLYCUB is on an upward price journey of no return.

5 methods of value accrual! Watch as they take shape in a BIG way

This is making Hive spread into more hands in the Cyptoverse. We just had a new market for arbitrage opportunities.

Definitely,this is a very good one and I wait to see how well this will have effect on the price of the token

Whatever the price could be but one thing is for sure, and it may add to its utility :)

At the moment, it seems to have positive effects on the price. But I think the short-term effects are not so important, the important thing is the benefits to PolyCUB and HIVE ecosystem. And in the long run, it will be of significant help to both ecosystems.

I just jokingly said this to a user now,let me repeat this,all this initiative makes me feel better and see it as a way of reaping the fruit of our labor in the community

This is actually huge. I'm super excited to try this bridge out myself!

Definitely everyone is going to benefit from this development, massive for for the community

It is great to see this step forward. We now have another leg in the expansion of both Hive and Polycub.

Hopefully this fills up quickly and another LP can be quickly implemented to BSC.

Hopefully this fills up quickly and another LP can be quickly implemented to BSC.

Yes although no word on the pair but a bHIVE LP over there.

What is being created on Polygon will be replicated on BSC. So yes, there will, at some point, be a bHIVE LP. It is only a question of how soon.

To me, the quicker the pHIVE LP fills up, the greater the chance the development team can look at adding that option to BSC.

I see the pHIVE liquidity grow faster than pHBD, especially now that HIVE is dipping. Reaching $1 million size of liquidity could be possible in a month time.

Think of PolyCUB in a lot of ways as a testing ground for us to deploy contracts and methods of value accrual. We're testing these now and then back-porting them to CUB (BSC) when we see how well they perform.

In our opinion, the new V2 vault direction is going to make POLYCUB multiples more valuable. As we see this play out and confirmed in reality (it's on its way to playing out as we speak, as POLYCUB is up nearly 2x on the week), we'll be deploying the same strategy on CUB (BSC).

All connected seamlessly across BSC and Polygon through LeoBridge which also means massive trading volume = massive value accrual for the LEO token itself.

I just hope The port of the PolyCUB functionalities to CubFinance would be as healthy as we have here on PolyCUB and even better.

Definitely,good to see more utility coming to the community,I sincerely hope this also have a massive effect on Price of the token too

This is our vision of the future for PolyCUB: a whole new set of vaults that are all paired with POLYCUB. The only exceptions being pHBD-USDC and pLEO-WMATIC.

Every other vault will be paired against POLYCUB. That's an incredibly bullish outcome for the native token of the platform. This means that value is accrued in 5 ways on all these vaults - generating massive revenue and also generating liquidity with every $1 that is LP'd on the platform for yield.

This makes PolyCUB look a lot more like Thorchain

This makes POLYCUB as bullish as RUNE. I forgot that PolyCUB was modelled after Bitcoin.

Massive one here and good to see another development when it comes to expansion for both hive and polycub.

This is one thing that makes the Initiative best of all

Certainly a good deal for HIVE and POLYCUB. More tokens would be locked in the pools and that means the prices may go up for both in the coming weeks.

There will be a lot of peeps dumping their rewards as usually happens.
But in the long run xpolycub is a great thing. I am staking all my rewards in there. Gotta build up that stake
Posted Using LeoFinance Beta

Just like building Hive Power. Those who did that in the low days of Hive are reaping the amazing benefits.

Yeah for sure... and I can't wait to see what the return will look like on this one!

The introduction of pHive is really awesome and a job well done which I believe will bring more progress in the blockchain with the massive benefits surrounding it. Keep up the good work leo team am impressed with every part of it.

With HIVE now on Polygon, this would be a great encouragement for more Hive communities to wrap their tokens to Polygon for more exposures.