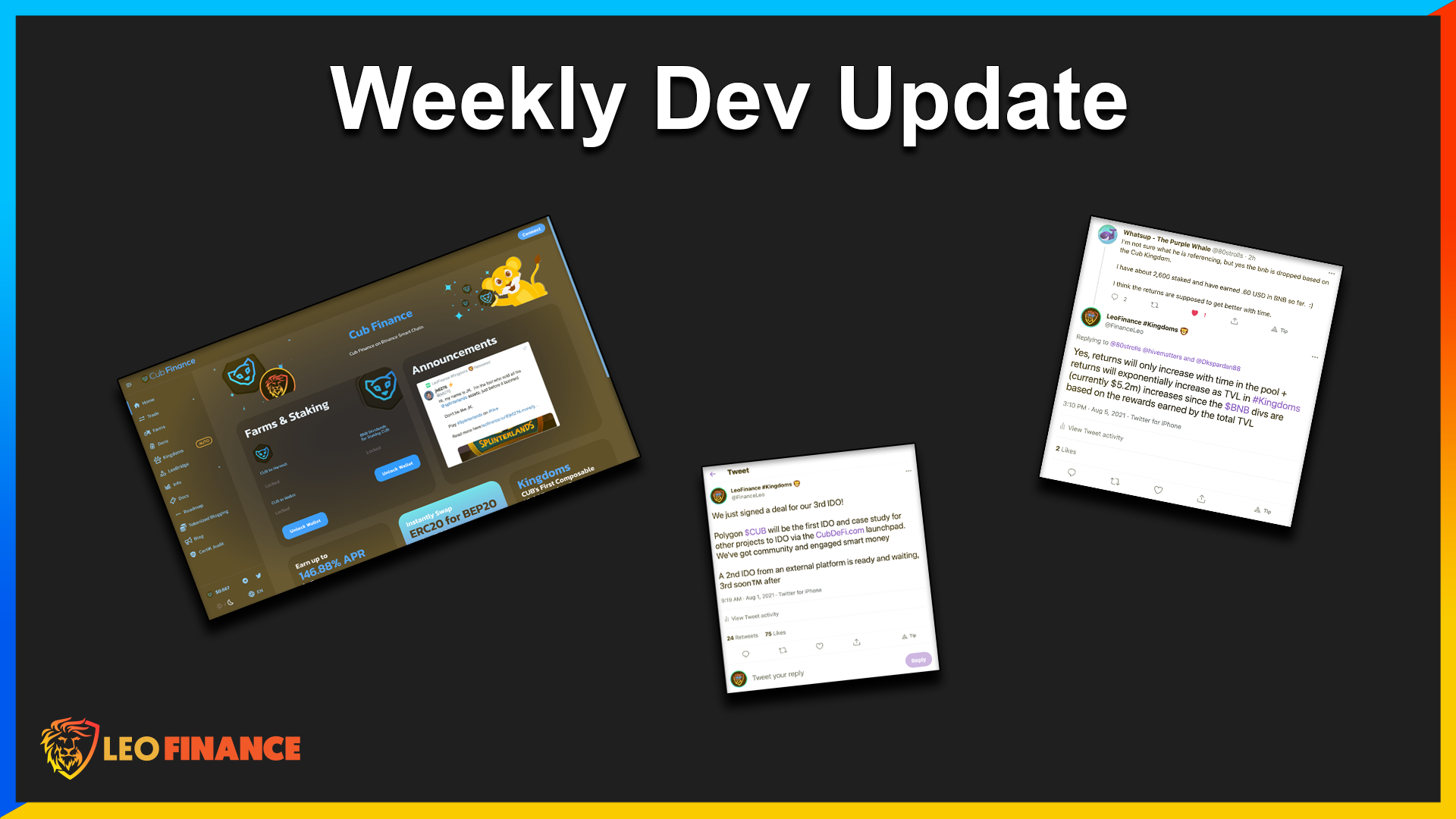 CUB's had a busy week of developments both on the front and backend.

CUB BNB Dividends have begun accruing. ICYMI: Staking CUB in the Kingdom on https://cubdefi.com/kingdoms earns a share in the total rewards generated by other Kingdoms vaults.

A 3% management fee is set aside from the other Kingdoms vaults (I.e. BTCB, BTCB-BNB, ETH, 4BELT, etc.). This management fee is derived solely from the liquidity mining rewards generated by these Kingdoms contracts - i.e. the CAKE, BELT or BAKE rewards earned by the TVL in these vaults (not a fee on the actual user deposits themselves).

This 3% is then converted from CAKE, BELT or BAKE into BNB. The BNB is then held in a reserve and is shown as claimable by each user who is staking CUB in the CUB Kingdom. 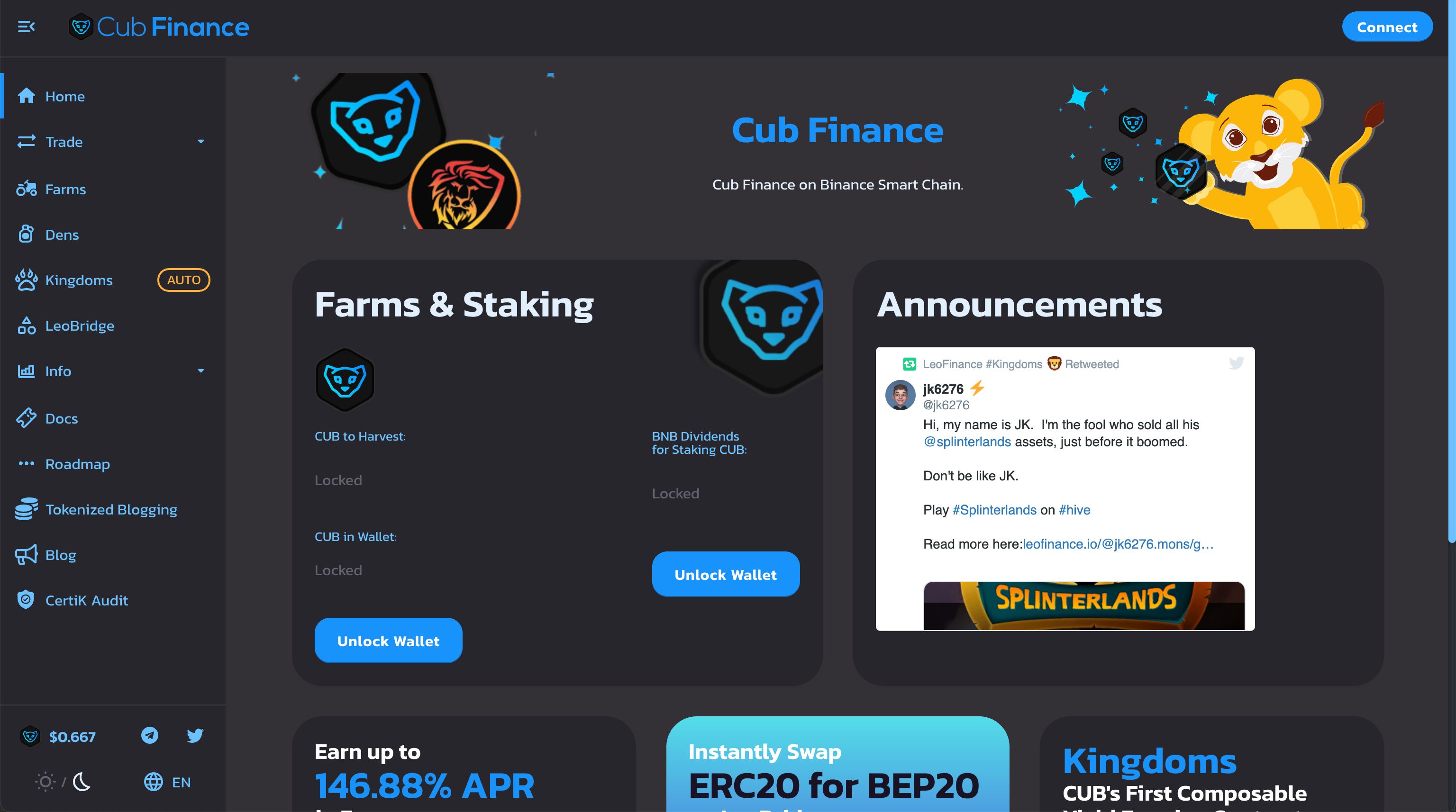 Why Are My BNB Dividends So Low?

A few users have asked why the BNB claimable dividends are so low (or even displaying 0 in some cases).

Additionally, these rewards are directly proportional to the total TVL in Cub Kingdoms. As TVL grows both through more capital flowing into existing Kingdoms vaults + new Kingdoms vaults getting added to the roster, these BNB dividends will grow exponentially.

CUB has undergone massive upgrades since it launched back in March of 2021. This is just the beginning of a massive expansion plan that LeoFinance has undertaken in the DeFi space.

DeFi is here to stay and so is LeoFinance. Our project as a whole will continue to find ways to adapt, expand and grow our community and the opportunities offered within it to attract new users and deepen the value for our existing community members.

CUB Kingdoms, BNB Dividends and other massive changes have already taken place. The next major innovation for CubFinance are CUB IDOs.

IDOs - initial DEX offerings - give new tokens a launchpad to generate funds. It's up to the project to decide how those funds are used. In most IDOs for the DeFi space, the generated funds are utilized to seed an initial liquidity pool.

We've built CUB IDOs to work in a few different ways. The first CUB IDO use case will be the launch of Polygon CUB.

Our 2nd IDO deal was signed a few weeks ago and will launchpad a dividend token which is an interesting new concept that a few tokens like Kittycake have taken off with.

Our 3rd IDO deal was just signed with another external team that is building a new AMM project (similar in certain ways to Pancakeswap, Pantherswap and Biswap). 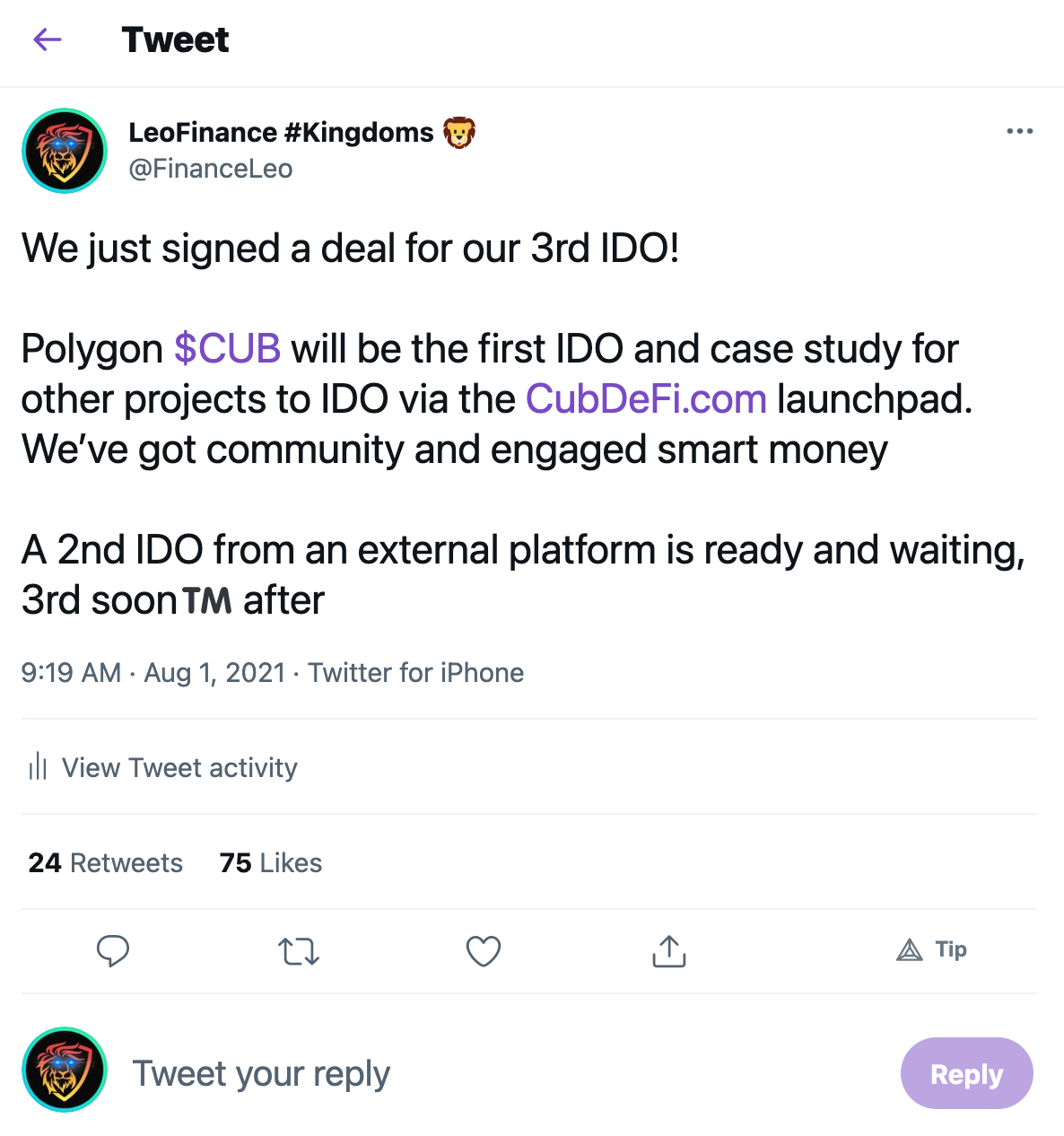 Each CUB IDO will burn a massive amount of CUB. The amount of CUB burned depends on the structure of the IDO and the desired outcome of the team who is IDO'ing through the CUB platform.

For Polygon CUB, there are no funds being raised. It's a simple 1:1 burn event for CUB:

We're anticipating Polygon CUB to have a limited "raise" (burn) of $1m-$2m USD worth of CUB. More details will be released as the launch of Polygon CUB's IDO gets closer.

As for our external team's launching IDO #2 and IDO #3, they've chosen the "IFO" model developed by other BSC platforms which we have adopted for CUB IDOs:

We're anticipating IDO #2 to raise somewhere in the ballpark of $250k - $350k CUB-BUSD. This means that $125k - $175k worth of BUSD will be generated for the external team (which they plan to use as seed liquidity for their liquidity pool launch). An equivalent amount of CUB (since these are LP tokens used in the IDO) will be raised and 100% will be burned: $125k - $175k CUB burned permanently from the supply after the IDO.

IDO #3 was just signed and they will be using the same IFO model. Their platform is seeking to be the next Pantherswap/Biswap AMM and thus, they plan to raise a large amount of liquidity to seed their initial token pool. This team has disclosed VC funding in the ballpark of $1-$5 million USD which is being used for development, marketing and initial liquidity in various pools on their AMM exchange launch.

They haven't settled on a raise amount yet which is entirely up to their team and what they believe they can successfully raise via CUB IDO. Current expectations are a raise between $2-$5 million USD via CUB IDO. If their IDO is 100% committed, they'll generate somewhere in the range of $1-$2.5M BUSD for their initial token liquidity pool. An equivalent value in CUB ($1-$2.5M USD worth of CUB - ~1.5M-3.75M CUB at current prices) will be burned permanently from the supply.

With the Kingdoms release, we turned CUB into a sustainable liquidity mining platform that combines the best of BSC platforms to generate sustainable and composable rewards for LPs seeking a long-term positions and returns in DeFi.

With the IDO release, we're adding a launchpad layer to the Cub Finance platform. This launchpad will allow tokens to formulate their own strategies for gaining initial funds to seed their liquidity pools and launch their platforms. In exchange, they're bringing multiple layers of value back to the CUB Holders:

We've completed our work on all of the Polygon CUB Contracts which means that our launch event is right around the corner.

Our next step is to complete our work on the Polygon CUB UI and then organize the CUB IDO vault and UI upgrade to handle IDOs.

As we get closer, expect more details on Polygon CUB as a platform and on the Polygon CUB IDO that will take place before the launch where 100% of the raised CUB will get burned.

LeoFinance.io is receiving a massive performance overhaul sometime within the next 7-10 days. This performance upgrade will have a drastic improvement on the speed of our Lightning DB Layer, content loading speeds and overall User Experience on LeoFinance.io.

Over the past few months, we've been roadmapping, designing and negotiating a major update to the LeoFinance.io interface. Recently, we've begun the actual development of this massive undertaking which merges the existing LeoFinance.io codebase with a new mobile-first framework.

This is a massive undertaking and has required expansion both in how we view the future of LeoFinance.io and in the team of developers involved in our project. We're currently anticipating a 1-2 month timeline to deliver on the newly merged codebase which will result in the launch of:

This will have rippling effects for our community and platform. It also sets the stage for #ProjectBlank to launch as planned with a desktop + mobile app (a fork of our new framework, once completed) before the end of 2021.

Last week's AMA had to be pushed to a new timeslot and we decided to opt for a recording as opposed to a live AMA due to some scheduling conflicts.

This week's AMA also has some scheduling conflicts. Our updated AMA time - which will be a Live AMA - is Saturday, August 7th at 11 AM EST.