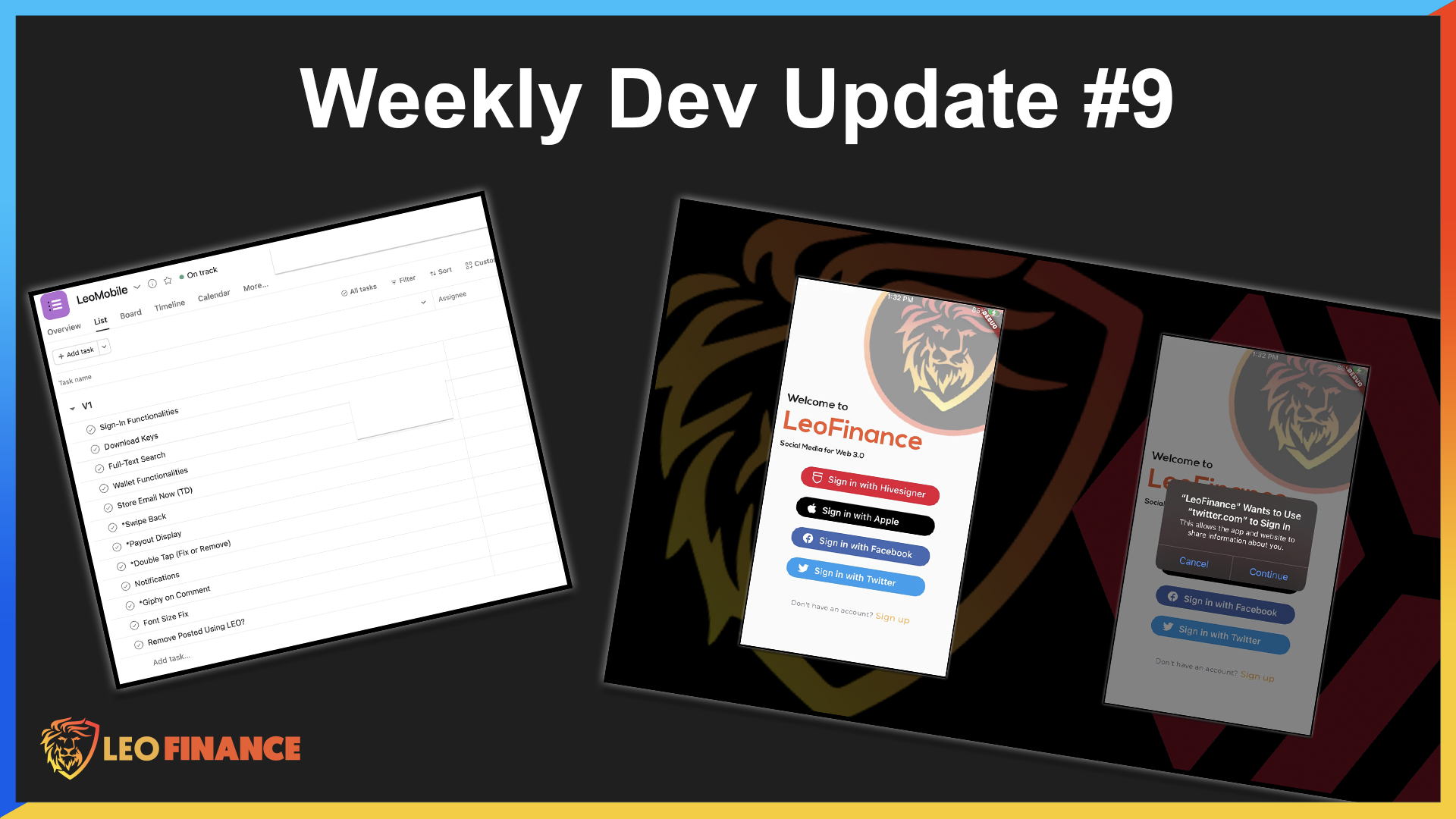 Our development on LeoMobile has been great throughout Q3 of this year. We were excited to finally deploy the mobile app and get open beta rolled out. Although only Android is available for download (still waiting for that IOS app store approval), we're happy to get the feedback now as we continue to develop Open Beta toward V1 release.

V1 will include a number of exciting features for LeoMobile. As of right now, we're focused on integrating LeoInfra V3 which was done in the past week.

Our current status is testing and ensuring the LeoInfra integration is successful before we deploy it into Open Beta on Android (and soon™️ on IOS).

In the below screenshot, you'll find the high-level roadmap of V1 for LeoMobile. This was taken from our new team dashboard (which we'll talk about below in ("Team Expansion, Workflows and Automation"). 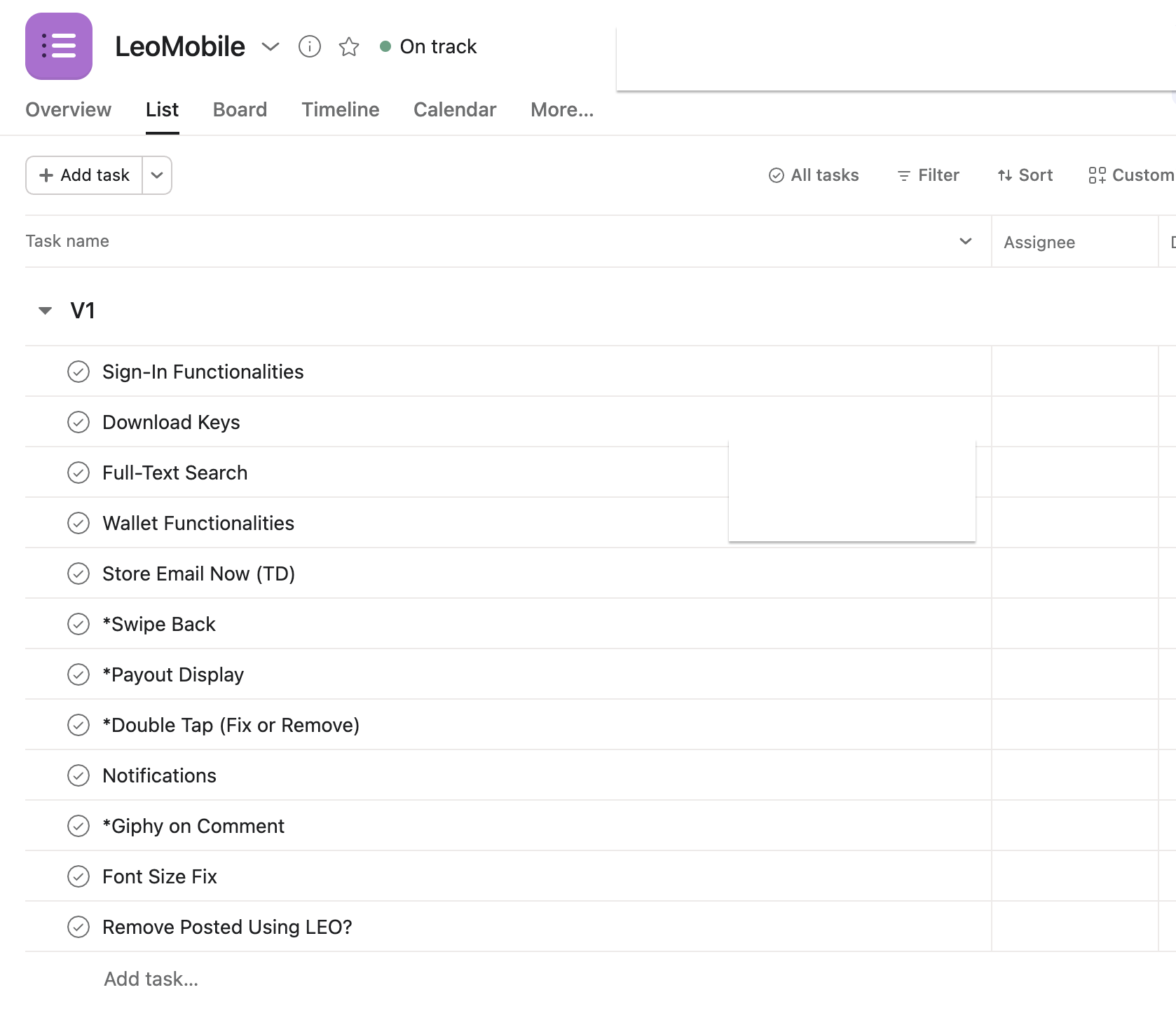 Other exciting features like Full-Text search will bring features to the Hive blockchain that people have wanted for years. Imagine being able to search anything about any cryptocurrency and get a rich text search ran for you with all the relevant content ever created on LeoFinance.

This and other "V-Later" features of LeoMobile and rewards-based updates to LeoFinance will encourage more evergreen content on LeoFinance. More on this in the future.

LeoMobile is now faster than ever. We've integrated and cleaned up a number of Lightning processes.

ICYMI: we developed Leo Lightning in early 2021 as what essentially amounts to a second-layer caching system for the Hive blockchain.

When users interact on LeoFinance.io (and now LeoMobile), their actions are sent directly to the Leo Lightning backend Database. This Database allows LeoFinance and LeoMobile to display the information (i.e. an upvote, comment, post, etc.) instantaneously on the frontend.

On the backend, Lightning is relaying this data directly to the Hive blockchain. This allows us to sidestep the 3 second block delay in user actions.

3 seconds might not sound like a lot, but when you're doing hundreds or even thousands of daily interactions, it adds up.. particularly to the clunkiness of the UX on the social side. We knew back when we started the Lightning DB that this would be a necessity for ProjectBlank.

Current developments of Lightning and integrating it into LeoMobile are essential building blocks for ProjectBlank development.. as are a number of other projects we've been developing simultaneously: i.e. LeoInfra (Hive Lite Accounts with Social Media Web2 sign-in options). 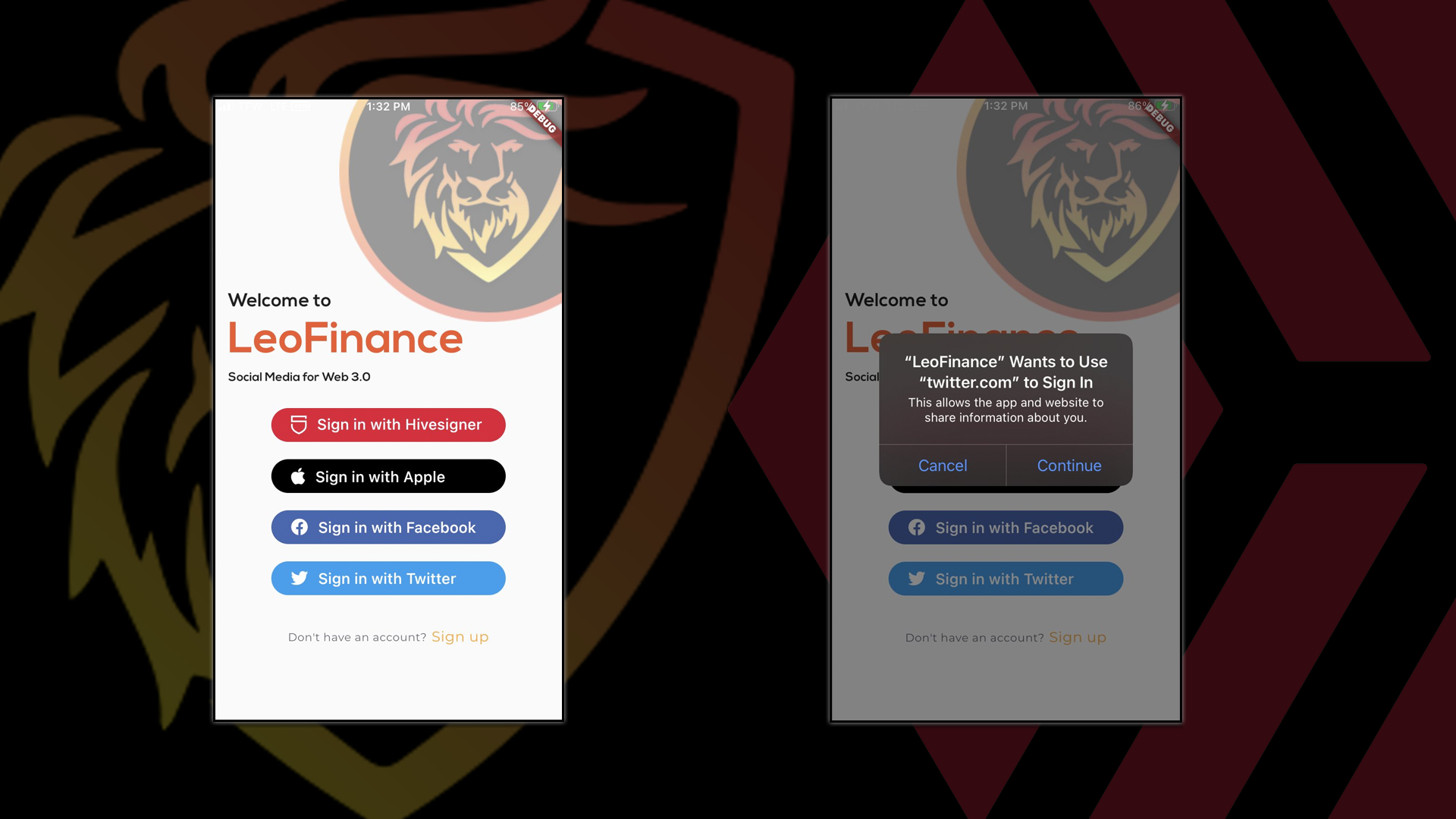 Many saw us discuss this in the last @leofinance blog post and in various tweets on Twitter. We've been working on LeoInfra V3 and have finally integrated it into LeoMobile.

We're currently in closed testing and development of LeoInfra V3 on LeoMobile. The above screenshots are live screenshots from the app and what the new version of the login screen looks like:

Our goal with LeoMobile is to bring a seamless web3 experience to the palm of crypto-curious people all over the globe.

As we continue to develop the app (and ProjectBlank alongside it), core backend projects like Lightning and LeoInfra will make the world's difference when it comes to mass adoption of our applications. We're still so early but the progress is astonishing when you compare Leo today to Leo 2 years ago.

Speaking of Project Blank, we're expecting some big news by the end of 2021.

ProjectBlank development relies heavily on LeoMobile, Lightning and LeoInfra. The combination of these 3 projects along with the 4th (____) is what makes ProjectBlank.

We're extremely excited to unveil these plans and more as we approach December. 🦁

We've said this many times in the weekly AMAs this year: 2021 is a year of expansion and automation for LeoFinance.

Our project and community have grown exponentially this year. It's crazy to go back just 12 months ago to this time last year and see the difference in our project. Whether you look at:

Now it's time to focus on expansion, workflow and automation. We've done a lot of work on all 3 of these fronts so far and things have been getting much better in the past few weeks.

For LeoFinance in general there is a bottleneck around Khal. As general project manager, devs are often waiting for direction, certain key aspects like Tech Support are waiting for attention, DMs pile up, posts are miss-scheduled, etc.

As the project has grown, it's become necessary to expand rapidly. The team is currently approaching 20 people spanning from part-time to full-time.. devs, admins, curators and more. Again, it's incredible to realize where we are now compared to where we came from.

Most recently, we started working on solutions to this bottleneck. Looking for more team collaboration and general organization to take off certain unnecessary work loads and allow our goals and KPIs to be hit more timely.

Here's a snapshot of what our Project Management Dashboard is looking like. We're using a tool called Asana and are also integrating a Team Slack channel. 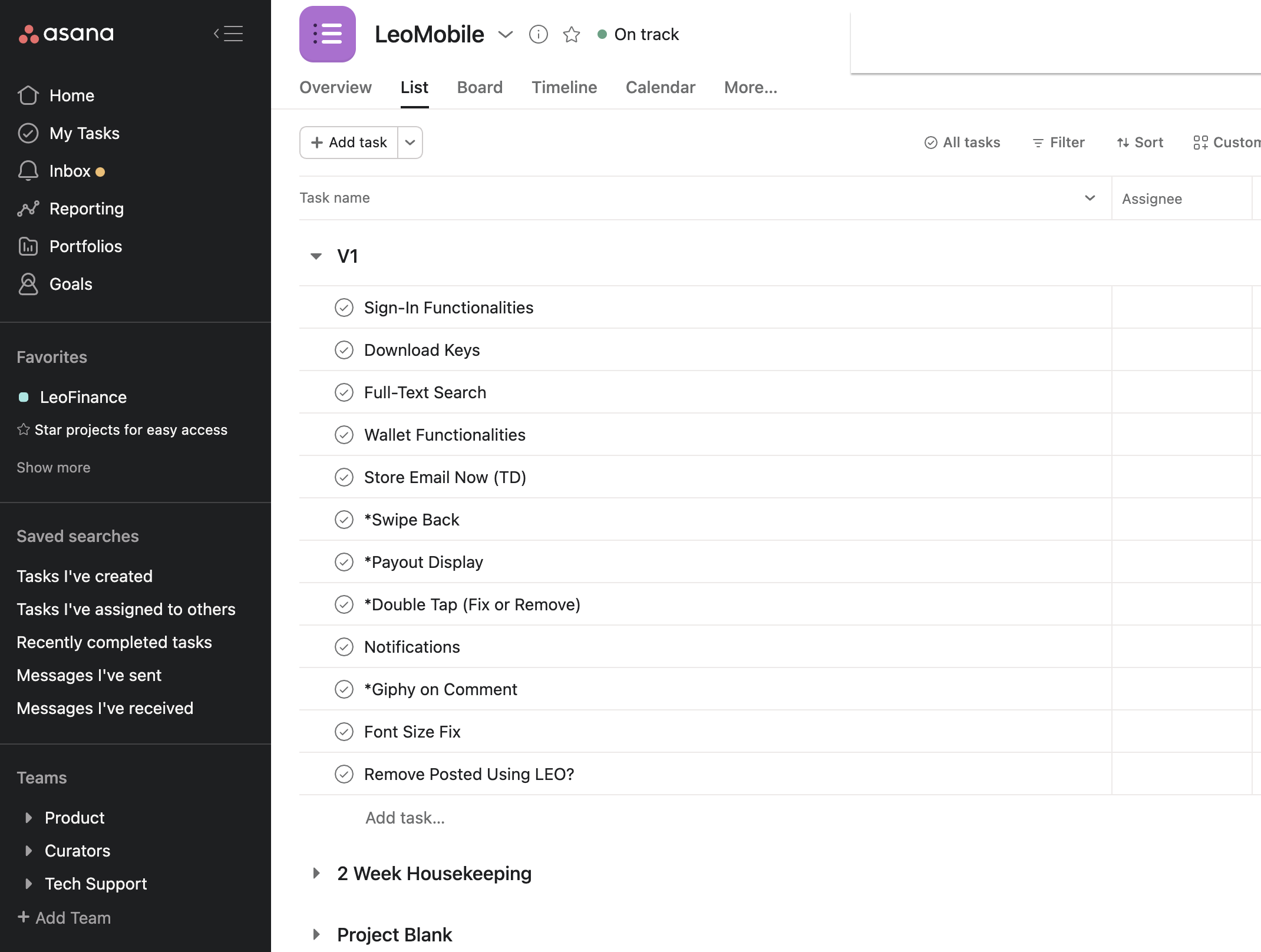 Generally speaking, LeoFinance is bigger and better than it ever was. Expansion on all fronts has become a necessity and we're working over time to make the behind-the-scenes organization more of an organization that is actually... organized.

With all of this in mind, we're looking to bring on 1-2 new people to join the Tech Support team (which is currently just Flauwy primarily and then Khal stepping in when needed). We're looking for someone who can dedicate some time to bringing much needed responsiveness and organization to Tech Support.

If interested, please DM khal on Discord or (ironically) open a tech support ticket to talk to us. We're looking for someone who's active a lot in discord to not only organize tickets but be responsive when people ask questions throughout Discord general chat and in tech support tickets.

The development of PolyCUB has been in its final stages this past week. At this point, we're just deploying 2 final vaults, getting our CertiK audit, deploying a few UI updates for xPOLYCUB staking and finally, working on some Polygon-based partnerships with platforms like Dinoswap.

PolyCUB has been nearly 4 1/2 months in the making. It's an incredible projects that is true to the new DeFi 2.0 movement with staking curves, bonding, PoL, harvesting penalties and more.

It's going to be fascinating to watch the impact it has on Cub and Leo.

On the CUB side, there is the airdrop that everyone is anxiously waiting for and a few other key integrations like LP Bonding (more on this at launch).

On the LEO side, there is the introduction of pLEO which will function identically to wLEO (ETH) and bLEO (BSC) but on the Polygon Blockchain.

pLEO will have a high-value farm on the PolyCUB site (with APR likely in the thousands+ after launch - same as when CUB launched in March 2021).

Most importantly, pLEO will also be used as a LeoBridge Smart Contract extension. By having a pLEO pool on Polygon, we'll be able to connect Binance Smart Chain to Polygon and allow cross-chain transfers using the depth of the bLEO and pLEO pools.

Obviously, this also means a major upgrade is needed to the reliability of LeoBridge. This is currently under development and we'll release details in the sooniverse™️

Our newest Dev team member is heading up ProjectDashboard development. This dashboard has been talked about at length in prior AMAs.

The core features of the dashboard allow you to input your BSC address and track all of your farm positions, historical values and projected future values based on current APYs.

Obviously, Cub Kingdoms are at the center of this platform but other apps are added as well. Pancakeswap, Autofarm, Biswap, etc.

This will allow us to do a number of interesting things. Namely, attract a wider audience of potential Cub Kingdom users once they see the leaderboard of high-ranking farms pointing them to the highest APYs on BSC (yes, CubFinance Kingdoms have the highest APYs for the largest farms on BSC due to the cross-composable nature of our contracts and the CUB yield Kingdoms can generate).

In addition to this dashboard, we're also building a 1inch-style DEX Aggregator. Many have asked why a V2 CubFinance AMM router for PCS hasn't been launched. This is the reason.

Instead of launching another UI for PCSv2, we're building a full-scale DEX Aggregator. This will let you swap any token on BSC at the cheapest swap rate by checking all the DEXes on BSC before giving your trade a swap route.

A small fee % is taken on each swap and will autonomously buy/burn CUB.

PolyCUB will introduce some interesting LP Bonding features. They are inspired by OHM and all of the recent "DeFi 2.0" platforms that have taken up that mantle.

CUB will also get LP Bonding - since our contracts for PolyCUB can also be integrated on BSC for CUB.

In the not-so-distant future, you'll be able to bond CUB-based LPs for interesting bonding rewards. This will allow CubFinance to create it's own PoL (Protocol Owned Liquidity) with endlessly deepening CUB-based LP positions. More details... you know the drill.

IDO #2 has recently gotten their CertiK reports back, we're getting close to their launch and once they're happy with their work with CertiK, you'll see IDO #2 go live.

We're working with them to create due diligence reports to help the community get familiar with their project before they even launch. This will allow everyone to learn more about IDO #2 before the IDO goes live. Stifling the level of chaos that we saw during CUB's first IDO contract.

We decided to move the Weekly AMAs to Tuesday morning. This is better for all of our schedules and may also allow us to reach a wider LeoFinance audience that may not be able to make our "roughly" Friday midday AMAs.

Our next AMA is scheduled for 10AM CST on Tuesday.

HiveFest 2021 looked awesome! We weren't able to make it to give our presentation due to another in-person event and private conference afterwards that ended up eating the whole weekend.

We did make some great headway on some Cub Kingdoms and PolyCUB partnerships. There's going to be some interesting news in the soon™️ future.

We still have a Hivefest presentation prepared and it's likely that we'll record something in the near future and post it as a general presentation which can also coincide with the final unveiling of the LeoFinance Whitebook.