Why Would Anyone Buy POLYCUB 1 Year From Now?

Some people get it and some people don't. The core mission that we focused on when we built POLYCUB was building a sustainable and long-term yield optimizing platform. 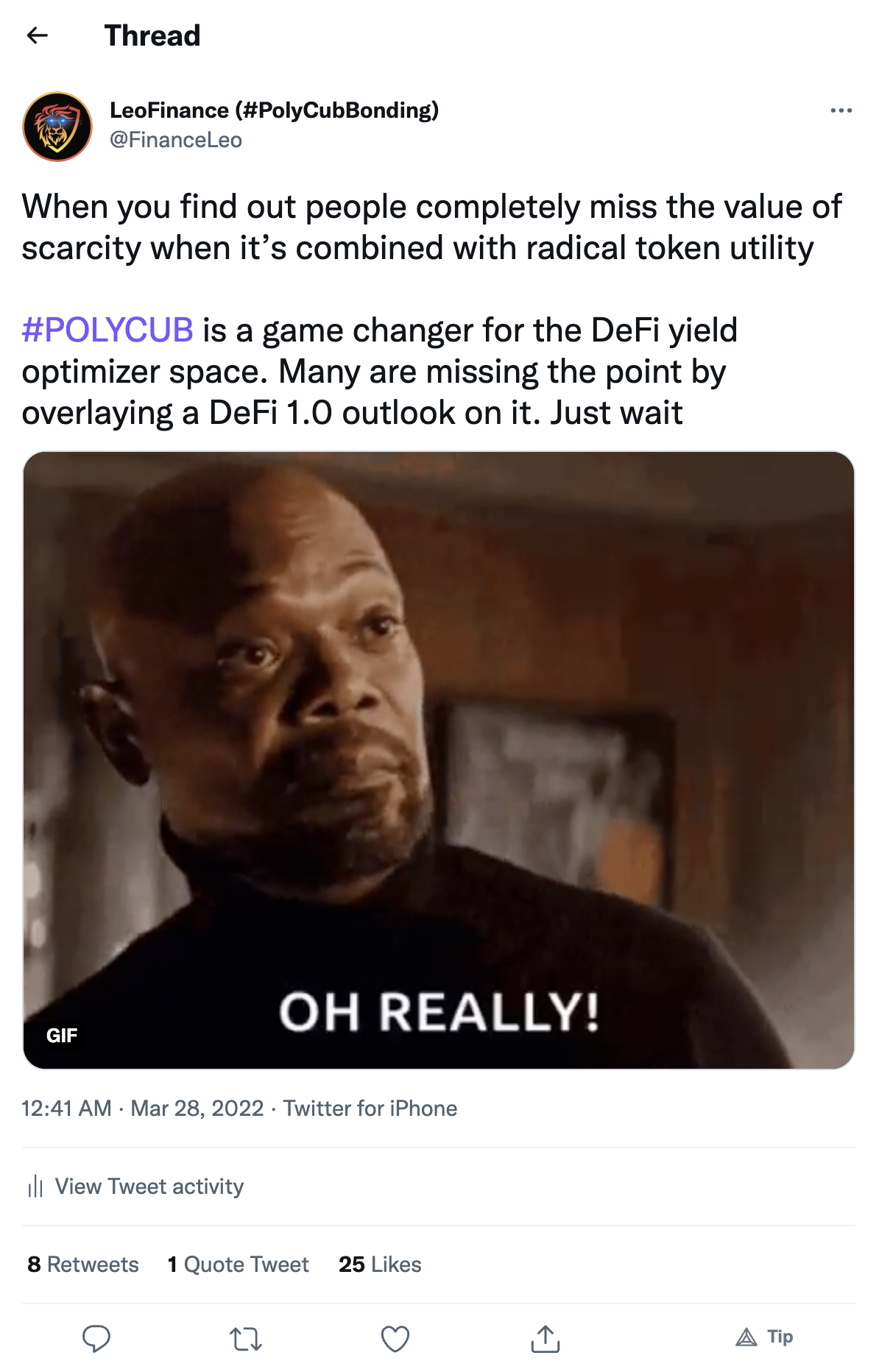 The value prop of POLYCUB is enormous. Imagine holding a long-term, scarce asset like BTC but being able to generate 30-50%+ APY on it in the long-run. Now combine that with the ability to collateralize your stake in the asset and take out an instant loan against it. Now you're earning 30-50% APY on the asset + have instantaneous liquidity in the form of a self-paying loan. Since the loan is earning APY and you're paying interest to the protocol liquidity, the interest owed is MORE than covered by the APY generated.

Make no mistake, POLYCUB is a game-changer in the Yield Optimization game. We're calling it the first in a line of next-generation yield optimizers for a reason. I think many people don't understand the way that it works and many still confuse scarcity for dropping emissions rates.

Dropping the emissions rate is one thing but planned scarcity that is combined with deep utility is a completely different concept.

The long-term roadmap of POLYCUB is clear. We've launched xPOLYCUB as the ultimate staking vault for the long-run.

Want to make a long-term, leveraged bet on POLYCUB's future? Buy POLYCUB and stake it as xPOLYCUB. You'll be earning a scarce asset (POLYCUB) while holding an ultra-scarce asset (xPOLYCUB). @taskmaster4450 has put out countless posts talking about the scarcity and extremely deep value that xPOLYCUB provides. 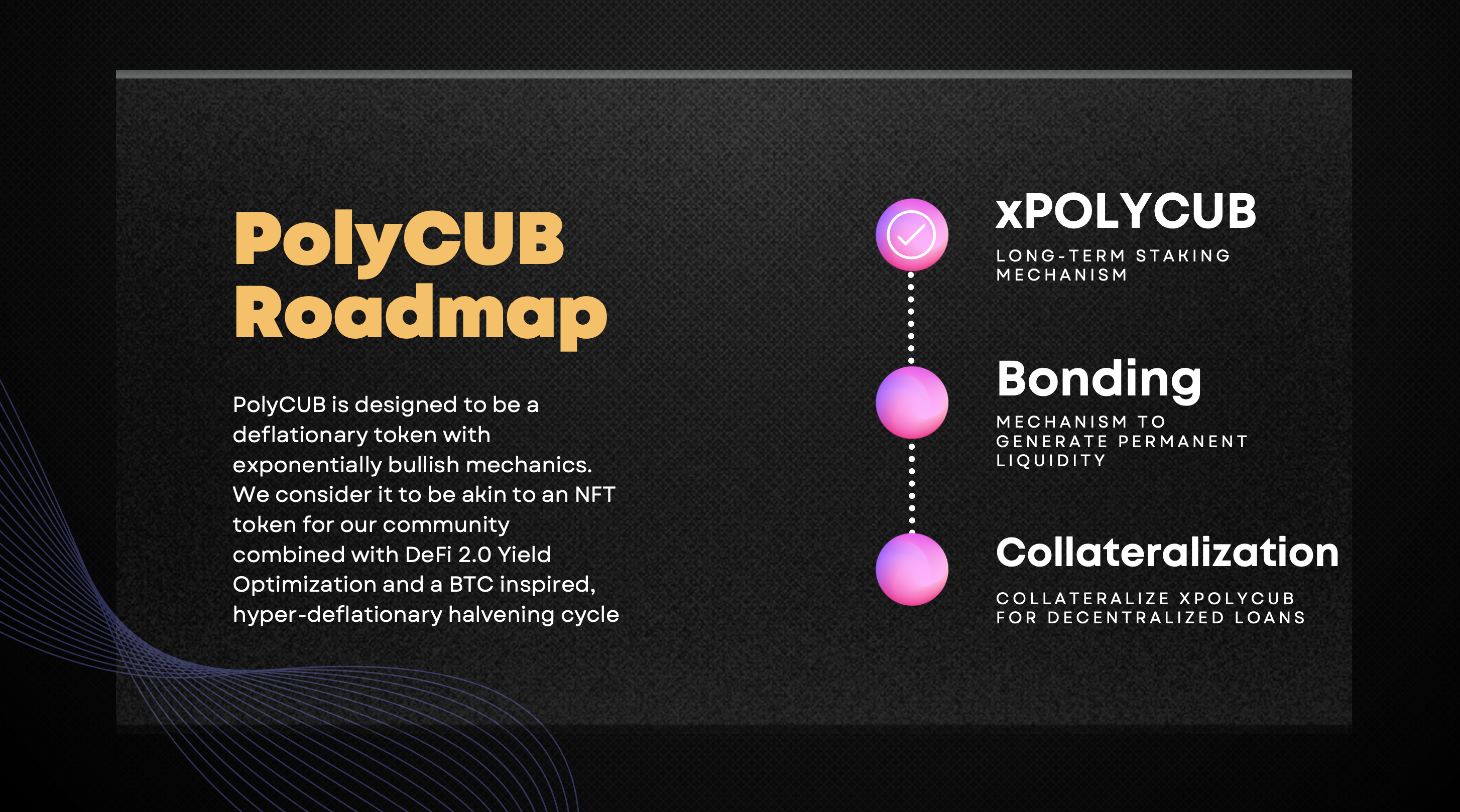 POLYCUB Changing the Idea of Scarcity and Utility in DeFi 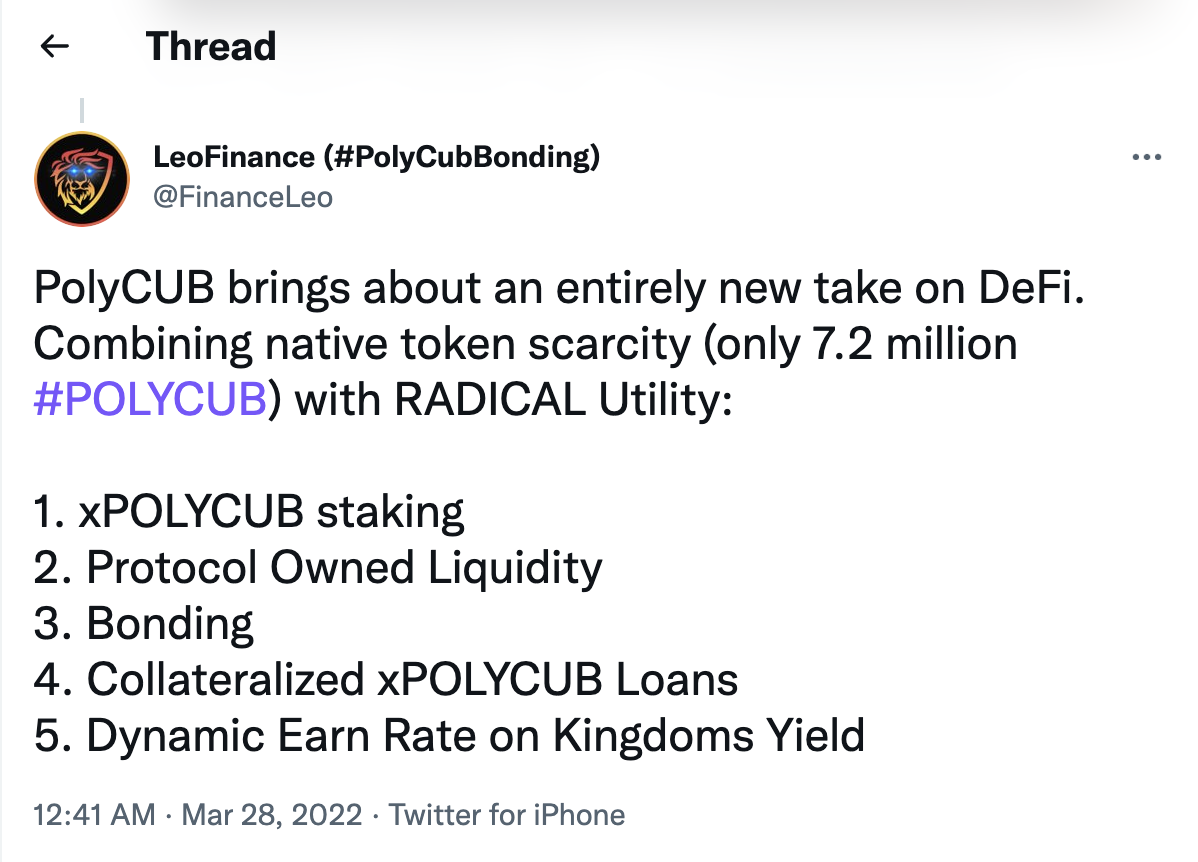 Most people are still viewing POLYCUB with a "DeFi 1.0 Lens", let me take you through why this is the wrong way to view POLYCUB.

We are currently in the early days of POLYCUB. Emissions rate is high and the halvenings are just starting to take effect.

While many view this as a rote and unnecessary exercise - having high inflation and dropping it over time - others understand the purpose. The point is to incentivize capital to enter the POLYCUB ecosystem. Bring that capital in by having high yields and then retain that capital by offering a long-term value prop.

The other purpose is to spread POLYCUB to as many hands as possible. We want to see the radical distribution take place in the early days of POLYCUB.

In this thread we gave a brief overview of things to come. POLYCUB is an absolute game changer in the DeFi space.

While many may miss the vision now, they'll circle back 3 months from now, 6 months from now and 6 years from now and see that they missed out on the opportunity of a lifetime to buy POLYCUB, stake it as xPOLYCUB and "mine early, mine often" to accumulate a scarce asset with massive long-term yield and value capture mechanics.

Here you can see the upcoming Protocol Owned Liquidity page which will show the breakdown of assets held by POLYCUB's protocol liquidity. This protocol liquidity is leveraged to generate yield. 100% of that yield buys POLYCUB and deploys it back into the LP Incentive Pool. This is how long-term LP Yields are generated once the emissions rate hits near 0 (around July/August 2022). 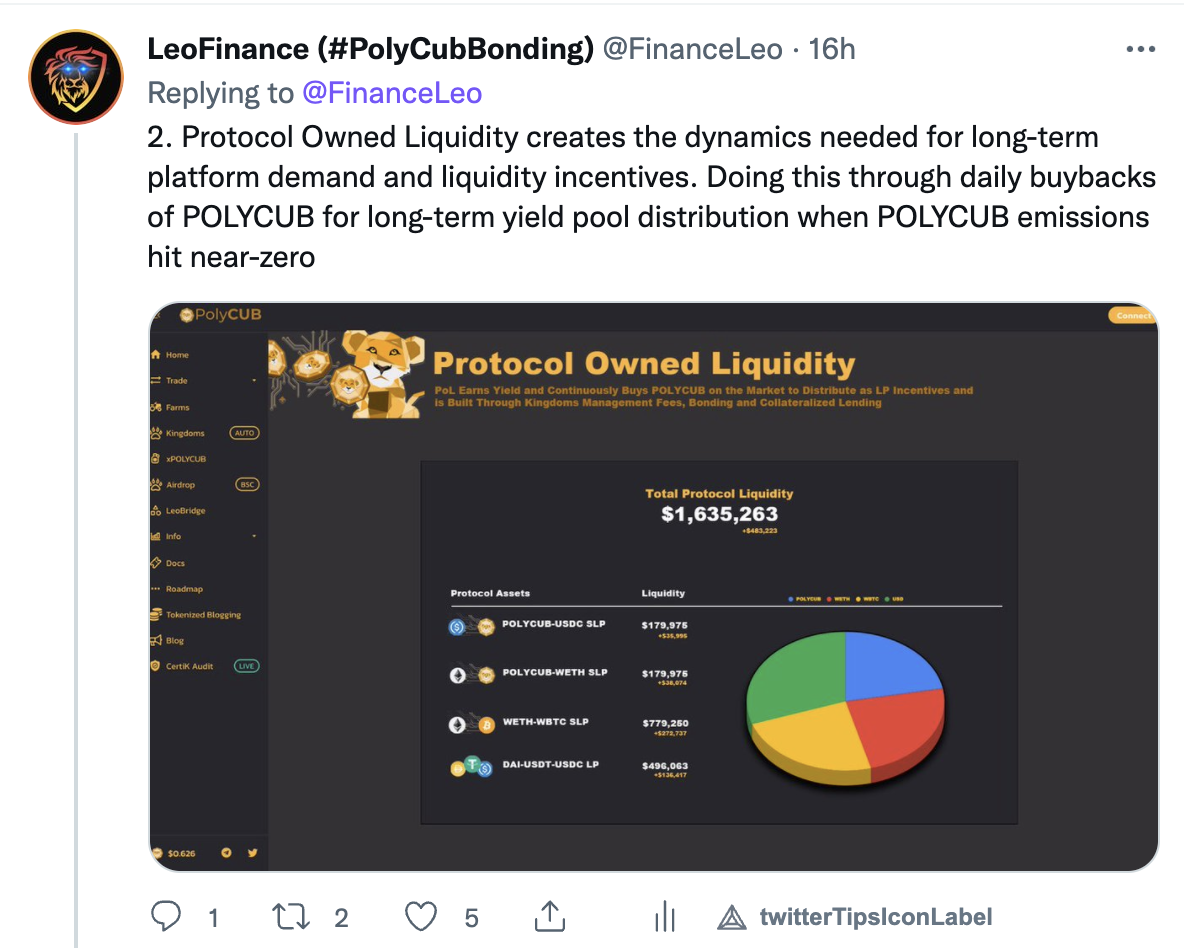 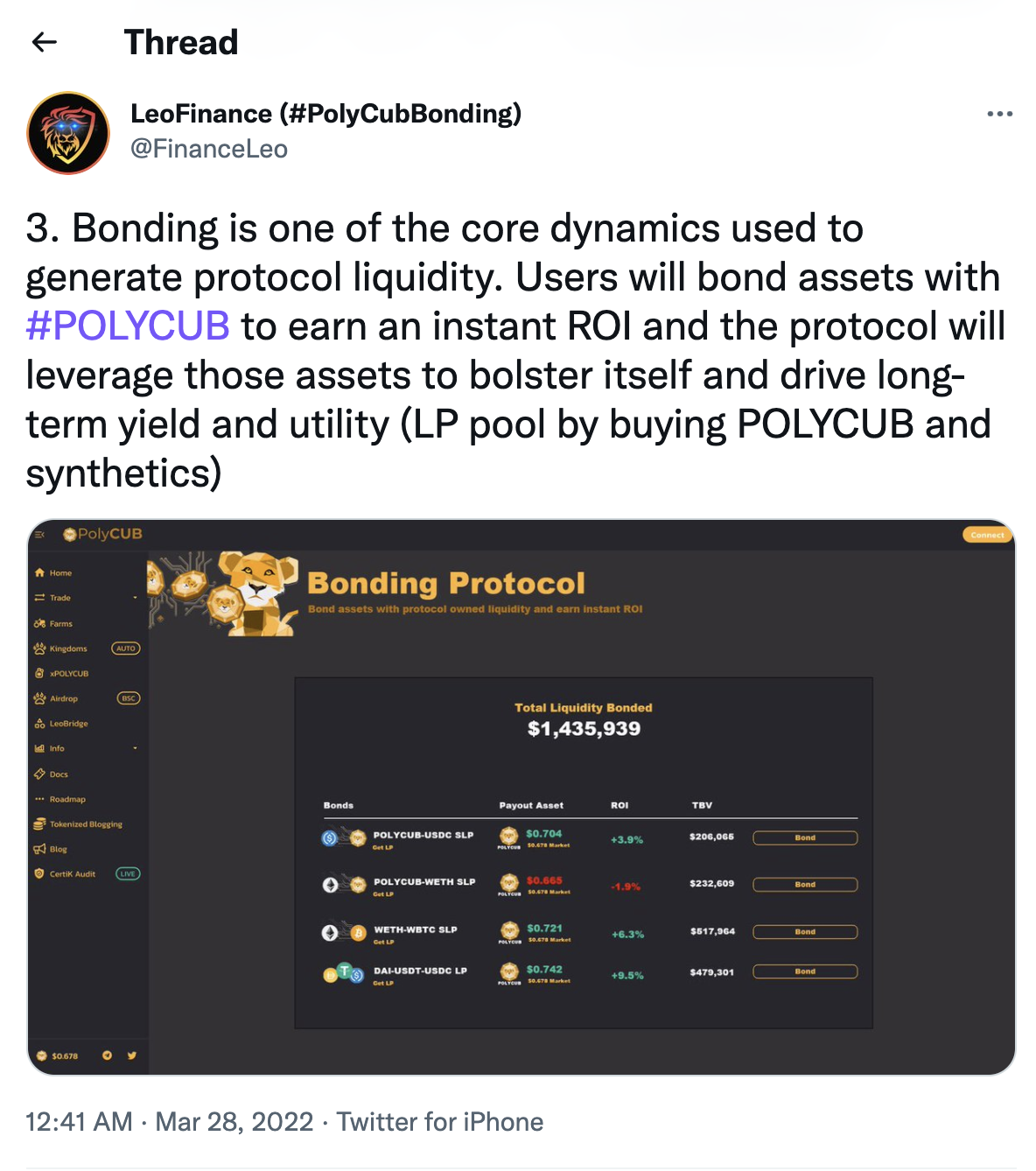 Bonding is going to add a whole new dynamic to https://polycub.com. Bonding adds massive liquidity depth to the PolyCUB Protocol Liquidity. The deeper that protocol liquidity becomes, the higher the risk-free value of POLYCUB becomes along with the speculative multipliers surrounding: 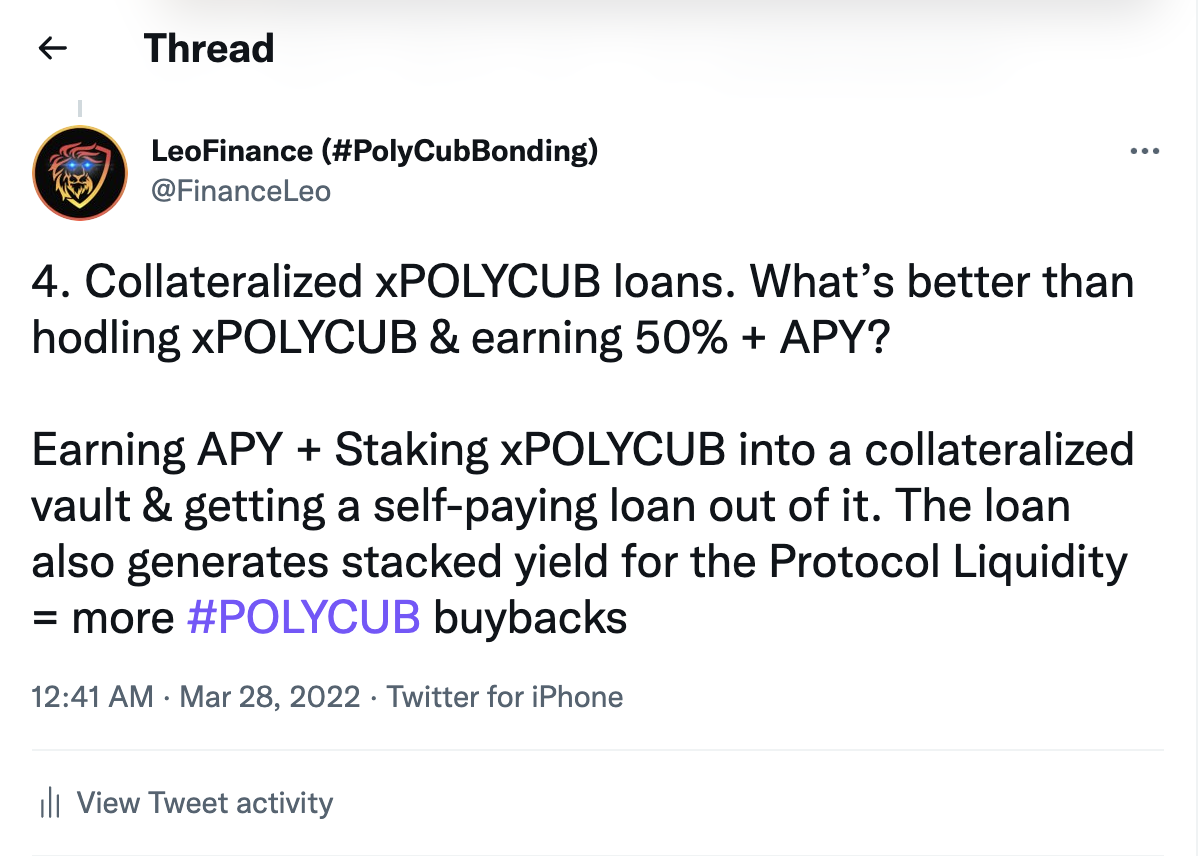 We've been trying to drive this point home for the past week. Many didn't see this aspect of the POLYCUB protocol coming to light.

There is a lot to unwrap when it comes to collateralized lending on xPOLYCUB stake. The key things to understand are: 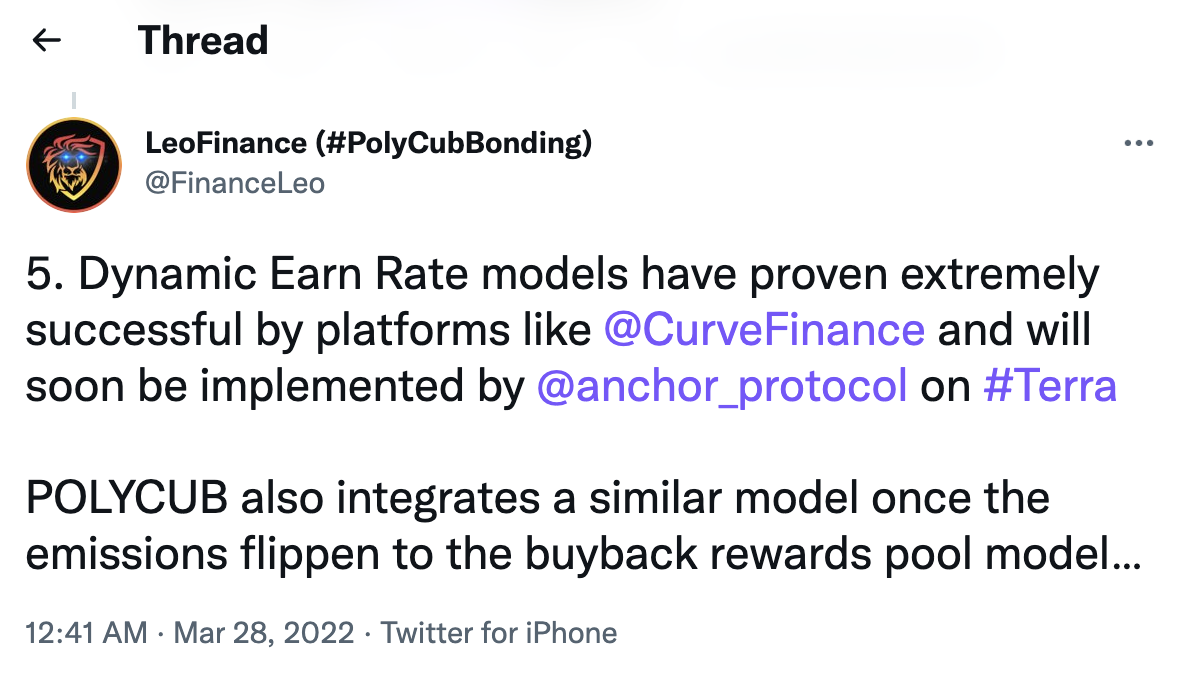 We haven't discussed this feature much yet as it won't kick in until normal POLYCUB Emissions per block are near zero in the coming months.

Once that happens, a dynamic earn rate will kick in. This can be seen on popular platforms like Curve where holding the Curve governance token allows users to earn higher yields than other users who don't have a certain % of their portfolio staked in Curve. 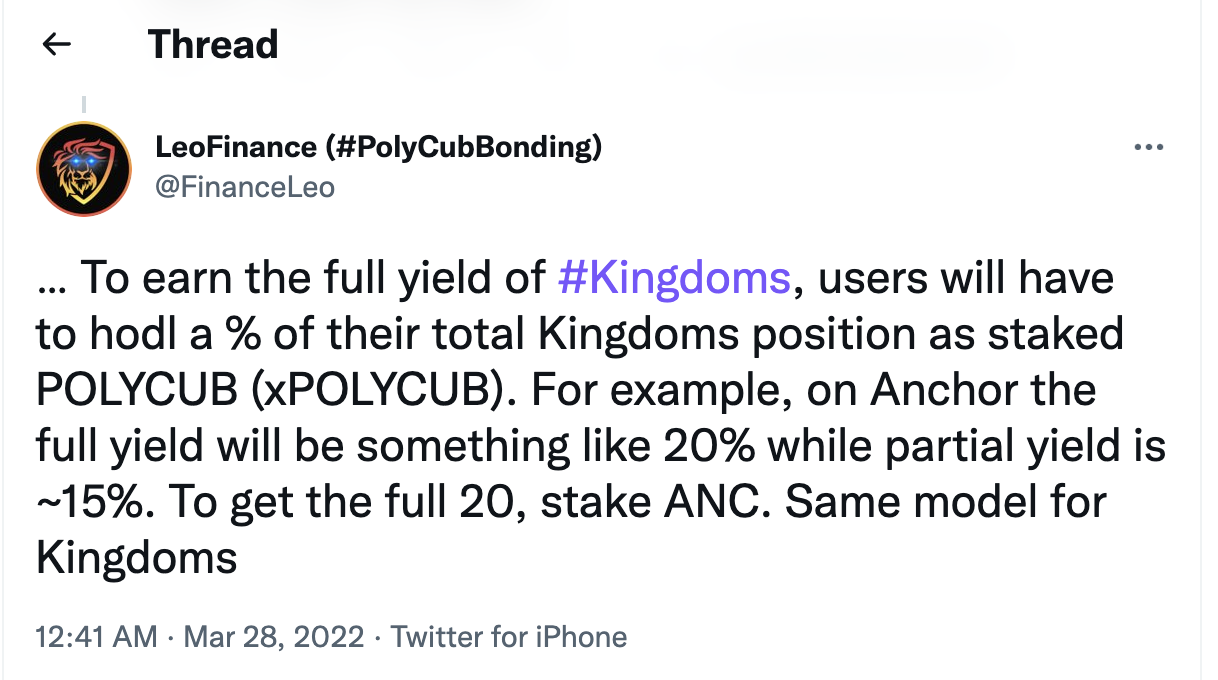 This can also be seen in other platforms like Nexo - you need to hold a % of your portfolio in the native asset to earn the full yield offered by vaults.

On Kingdoms, a dynamic earn rate will take hold. For example, if you hold $100k in Kingdoms vaults and don't have any POLYCUB staked as xPOLYCUB, then you will only earn partial yield. That yield is likely to be higher than any other yield optimizer but it will still be significantly less than fully optimized yield which can only be earned if X% of your portfolio is held as xPOLYCUB stake.

This adds yet another long-term reason to buy and hold POLYCUB. As you deposit more and more assets into Kingdoms (or they autocompound / grow, etc.) your need for POLYCUB stake will continue to grow to ensure that a % of your portfolio remains staked as xPOLYCUB to earn full yield.

The popular Anchor protocol on Terra is gearing up to release this feature as well. It is a core utility in the DeFi 2.0 landscape and POLYCUB has it built-in for when the emissions rate gets to near-zero rates.

Yet another reason someone would buy POLYCUB 1 year from now. 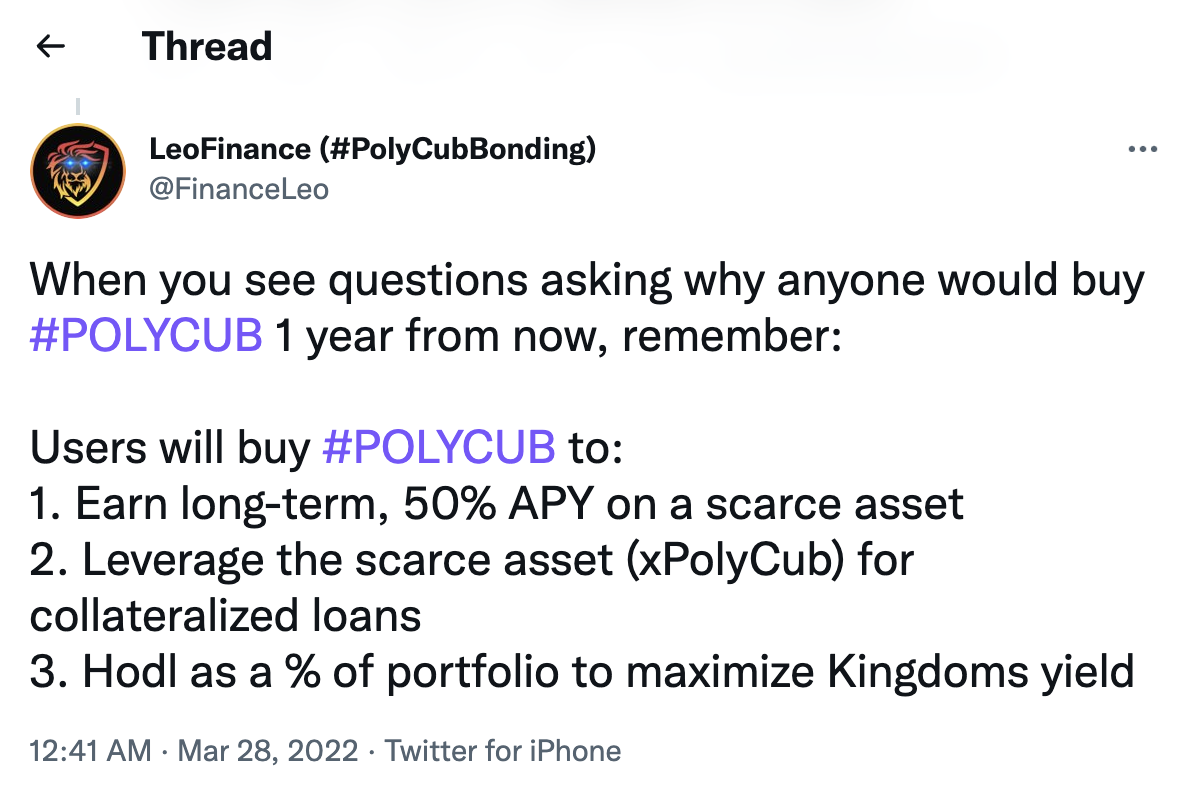 We don't expect everyone to understand POLYCUB at the jump. Just as with the first few days of the xPOLYCUB vault, it will blow everyone's minds when you see just how incredibly well-designed the mechanics of POLYCUB are in the long-term.

If there is one thing to say about LeoFinance and our Web3 Ecosystem it is this: the long-term is always the focus.

So while we don't know what will happen in these few weeks during the launch of POLYCUB and initial halvenings, we do know that the long-term sustainability will take over and POLYCUB will be a forever number-go up asset.

The risk-free value creates a floor of the POLYCUB price and this combined with the radical dynamics of scarcity and deep utility for buying and hodling POLYCUB to further optimize your yield are what will drive buying demand now and in the future.