I've been around Leo for just a few months and the LeoVerse has already changed a lot since then and I can't even begin to imagine how much has changed since its inception.

We have more than 600 monthly active users, some of them have been part of Leo Finance since day one back at the legacy chain, some others joined when we all migrated to Hive, and some others have been part of this community for only a few days, but since the LeoVerse is constantly changing, improving, and receiving a lot of updates and social changes, this contest idea by @firstborn.pob takes a whole different meaning for each of us.

I wonder who can make the most thorough post describing and comparing how Leo Finance was back when they joined the platform vs how it is right now?

But why wonder if we can find out? 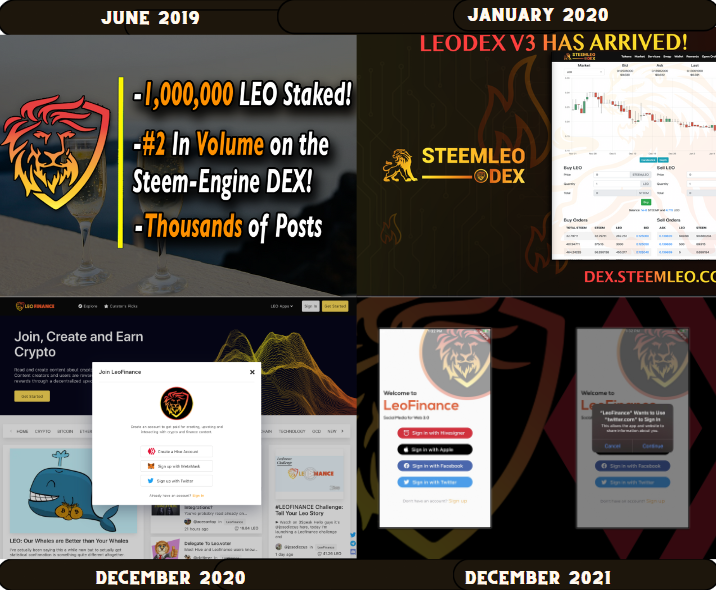 We have Leo Power Up day coming on October 15th, and what better way to encourage Lions to join this contest than to have TEN prizes of 150 $Leo each to allow them to power up?*

*In case they want to power up of course, although it beats me why wouldn't they power up considering how huge the prize pool is

There are only 3 requirements to join this contest:

That's it! Fulfill those three simple requirements and you are now eligible to win one of the prizes.

You have until Sunday, October 1st at 23:59 PDT to make your post

If you don't know what to talk about, you can always go the safe way and talk about how the interface was back then, what features it lacked, how easy was it to use, the social initiatives, the DeFi scene (if there was one), the internal market (leodex), the community initiatives (like leomarkettalk, engagement league) and everything around the LeoVerse (not just leofinance.io but also all the other projects that are part of the ecosystem) AND compare that to how it is right now!

ProTip: We now have Community Pages, Threads, leogrowth contests, lightning network, an improved Leopedia and Leodex, a couple of DeFi projects, Hive community contests sponsorships, and much more! Do your own research and try to remember how Leo was when you joined the Lion Pride!

Posts that talk about what they would LOVE TO SEE implemented on leofinance.io or the DeFi projects will earn some points for deciding who wins! So make sure to also go in-depth about what you want to see on Leo Finance in the near future!

Disclaimer: Anyone can join this contest, even if you just joined Leo Finance today, you can just talk about everything happening in the LeoVerse as of today and describe what you like the most!

All the liquid HBD from this post will be used to sponsor community driven contests from the HIVE ecosystem, so spare a vote!

This is a very nice Initiative and an awesome topic to talk about.

We hope to see your post @emeka4, you're always joining them, thanks!

This is a solid one and will really reveal alot about Leoverse. Can't wait to read some of the best entries and maybe, make an attempt.

I wonder if @finguru will take part, at least not for the price but to delight us again in his excellent publications, I would like to read some!

Finguru's posts kick ass, we know for sure he'll be making one very soon. It will be interesting to see all the points of view from everyone!

As a community we can definitely do this! We expect your post @wassemahsan887

fantastic Initiative and I would love to participate. I Will submit my post soon.

That sounds great, we are waiting for it, we know it will be amazing :D

Looking forward to read your entry. You've been here for long.

This is a Nice one. Some newbies who haven't seen how Leofinance was before will be able to know more about.

Though what I wonder is if It's allowed to do Research on how Leofinance was back then and make a detailed comparison Vs how Leo is Now.

Well, Good luck to everyone!

It will be eye opening for some to see how far has the LeoVerse evolved for those who are new to the ecosystem. Of course it is allowed, you are free to research as much as you want to make the best post out there!

Indeed, it's going to be an interesting contest. Seeing how LeoVerse has evolved would be very inspiring to many.

Glad you liked it, we are eager to see your post about it!

Hopefully we'll see a lot of new ideas that will fuel some of the updates in the near future!

What a cool topic. It will be great to reminisce how much have changed from months ago to today. All the best everyone!

Glad you liked it, hopefully you join us, you always come up with amazing content :D

I love it! Started writing for my entry supposed to be published last night but the bad internet made me sleep, lol! Thank you lots for your kind words :)

Not yet :) It will be in a few hours. Need some proofreading and finishing touches, lol! It's lengthy, the longest I've written so far.

That should be. Telling the story of how LeoVerse has evolved should be inexhaustible.

You're right about that :) Trying to squeeze in some more but probably best to keep it a bit more succinct and shorter.

This would be the perfect way to reflect on our progress and talk about the development that we experienced on the LeoFinance community.

And also a great way to spread the word about how much Leo Finance has evolved through the years and hopefully more people will turn their eyes towards Leo!

Wao this is interesting let me get my hands on it

We knew you would join this, nice!

This is a great initiative...

Are you going to join as you always have?

It is good to finally see this becoming a contest
Thanks for bringing my idea into reality.

@firstborn 😆😆, that is a mistake I guess, but of all thanks for the mention

Fixed! Thanks for such a cool idea, we are expecting a lot of feedback from the community! You are pretty much obligated to make a post about this now :P

Even though am new here,I will definitely be giving this a try too, just to participate in the constet for the fun of it

Exactly! This contest is both for old school Lions and new ones! We hope to see your post soon!

Further, it will afford new users the opportunity to know more about LeoVerse.

This gonna be a powerful contest. Sure will have my entry in this, perhaps not for the prize but because I've got a lot to say how SteemLeo has evolved from a tribe on Hive to a multi-chain community. I'll sure have every new user around my influence to participate in this.

What an awesome contest. You guys also rock it...
I have only been here for part of this year, so unfortunately don't know what it was like in years past but am sure I can conjure up something including what I would like to see.

I'm sure you'll love to read about how the LeoVerse has evolved. Looking forward to reading your own review for the past year and suggestions for the future.

I most certainly am loving reading what I have seen so far, and yes I will be popping up with my thoughts and recommendations very soon :)