HIVE's potentials are rapidly turning into palpable possibilities seeping into many fields of which we are already engaging in, albeit in a more centralized manner. Project Blank (coming in 202X?) is being built atop hive's incredibly rich developer-centric environment in order to compete with the likes of Facebook, Instagram, Twitter, and many more players in that league. Savings accounts and DeFi is already one of HIVE's strongest suits as well, providing stellar interest rates, whilst keeping the sentiment of "Not your keys, not your coins" tightly woven into the basal layer of operations. A stablecoin not anchored by the devaluing Dollar, but by an algorithmic process that would produce $1 worth of $HIVE, no matter the market conditions, for every $1 HBD exchanged. 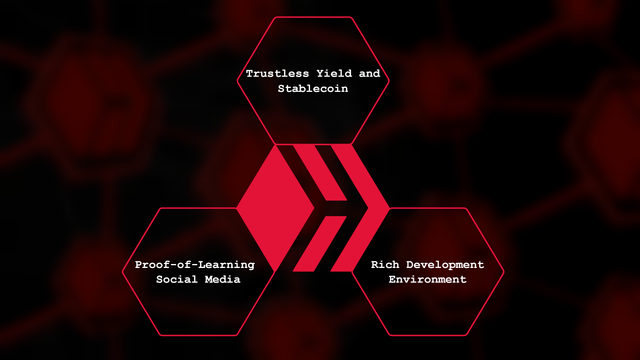 HIVE, when juxtaposed with a network as ubiquitous as Ethereum, has managed to create a unique dichotomy in regards to earning rewards. In a network such as ETH, which relies on users with the highest stakes that are online in order to validate the network and verify transactions, the only way to earn rewards is through Layer 0 mining.

Whilst HIVE might be similar in that regard, seeing as how both of these networks are based on Proof-of-Stake, it goes a step further. Validating blocks, which entails always being online 24/7 and the maintenance of a good bandwith network, isn't the only way to earn. Enriching the network through the continuous churning of knowledge in the form of articles is another way to receive rewards directly from Layer 0. Thereby the dichotomy: DProof-of-Stake to keep the network secure, and proof-of-Learning to keep the network busy.

$HIVE and $HBD isn't the only thing you are gonna be rewarded with. The social media front could be balkanized, with each tribe having their own unique token as author rewards alongside HIVE and HBD. It wasn't long until entire communities supercharged themselves with their own tokens, rich with identity, special interest groups, and many more elements pertaining to social cohesion.

DeFi has taken on a meteoric rise since the beginning of the bull run, and is still around the block, despite being a little out of steam. Using Ethereum as a comparator, the only way to earn yield upon your stakes, excluding CeFi services, was through applications and yield aggregators built upon Layer 1, atop ETH's network. The overarching problem with DeFi, with its glamorous yields and rates, is the fact that it's remarkably unstable, barring any malicious activities the developer(s) behind it may pull.

HIVE, whilst giving a platform for such endeavors with similar risks, offers something much more attractive with virtually no risk involved: A 20% APR (subject to change by the witnesses) on your HBD, secured at Layer 0, with complete control of your coins.

This is huge, not only does it render CeFi basically completely redundant and superceded, it also blows 80% of all DeFi projects out of the water provided you compare them with HIVE's yields and security as one package.

With the next hard fork around the corner, HIVE is championing its most prized figures in the community, the developers. ETH, while much more mature in its operations, has one achilles' heel that just about does it for the people wanting in on the game: Fees. The insurmountable tax on every transaction you make on this network is going to suck you dry unless you've got more than >10 ETH to spare in your wallet, and you better hope whatever you are doing there nets you a big chunk of money.

HIVE's ecosystem really needs no introduction. Its accessible, feeless, without barrier, and if you've got a wowing proposal, funding from the DHF. HIVE is about to change the game with the coming hard fork by introducing Hive Application Framework.

Basically, HAF opens the door to many developers from all walks of life. Those who are proficient in Java are just as welcome as those working in C++, as those dealing in Solidity. The role of HAF to these developers is as the role of the compiler to a coder. HAF is going to render the pool of developers that are able to participate and build applications atop HIVE to be much larger, basically lowering the bar of entry, and facilitating production of Layer 1 programs.

HIVE is going to be at the forefront of the Web3 game, but the real question is whether the world is yet ready for Web3. We've seen scams and Ponzi schemes being built left and right on Binance, we are now seeing CeFi custodial services and exchanges either getting thrust into insolvency and petty victimhood to hackers. Most greivous of all, we still, to this day, see the ineptitude of the common man as he cries to his governments after each of these events, only to be met with the same response: "Not your keys, not your coins."

Those are the alleged squadrons of Web3, wherefore are they repelling the layman from adoption? Those laymen, out of their ineptitude, do not want to haggle and negotiate with keeping safe their passphares to their wallet, they don't want to go out of their comfort zone of the typical username/password interface into the unfamiliar places of addresses and strings of numbers.

The world at large simply isn't ready for Web3 yet.