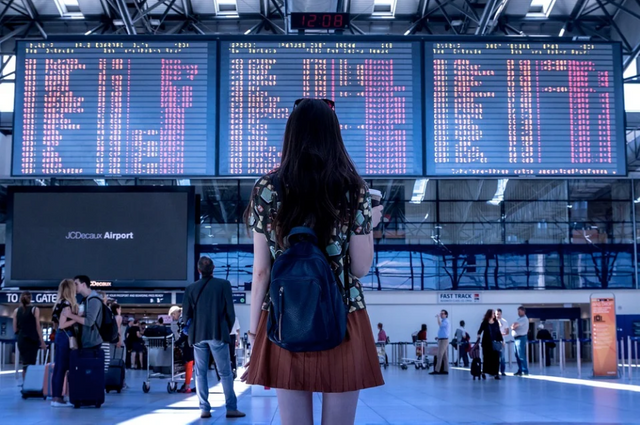 I took a trip to Orlando a couple months ago to hang out with a bunch of anarchists.

I got to travel for the first time in about two years. I met some long-time online friends in person. I enjoyed the warm weather and the seditious poolside discussions, and I had one of those snort-laugh inducing conversations that can only be had at IHOP at two in the morning with people who really get you. It was great fun and restorative for my spirit, but that’s not what this post is about.

This post is about how I tasted totalitarianism at the airport.

If you’ve been reading my posts for any length of time, it will come as no shock to you that I am an anti-authoritarian of the highest degree. Individual freedom vs. centralized authority is the lens through which I see the world and the axis upon which I have mounted my moral compass. So it will be unsurprising that when I have the misfortune of being at a post-2001 American airport, the experience wears on me.

Ever since the passage of the Homeland Security Act of 2002, air travel has been a pain, to put it mildly. You have to pull a bunch of things out of your suitcase, remove your shoes and have your body parts irradiated by grumpy government agents. And, god forbid you have a factory-sealed package of sugar substitute in your luggage, because then the goons will proceed to examine all of your belongings with a fine-tooth comb, swabbing your laptop and shampoo bottles with a mysterious strip of paper, and will probably grab your junk just for good measure. (I’m speaking from experience.)

We never needed this extra layer of “security”, I think, and we never wanted it. For its stated purpose of preventing terrorism, it has proved fruitless. While the Transportation Security Administration has undoubtedly swabbed innumerable items for possible explosives and confiscated countless potential weapons—some of them firearms, sure, but also pocket knives, scissors, toenail clippers, and the like—there is little to no evidence that the agency has ever thwarted an actual terrorist attack. And even given its prolific weapons-detecting activities, a 2017 investigation found that agents missed firearms in undercover investigators’ luggage 70% of the time.

Clearly, the TSA is not preventing terrorism, and any impact it has on air travel security in general is minimal. So what is it really for?
Enduring the labyrinth of airport indignities on my return trip from Orlando, I encountered an entirely new, advanced, and sophisticated level of authoritarianism which I have come to think of as “lazy tyranny.”

I reached the agent in charge of scanning my identification and checking my boarding passes. A layer of plexiglass separated us. I tried to hand him my ID and boarding passes through the five-inch vertical slot between the plexiglass and the desk, but he would not take them. He pointed a blue-gloved finger to a small scanner and said “Scan it.” But the scanner was behind the plexiglass, facing the agent, so I had to push my arm through the narrow slot and turn it in a very awkward position in order to get the documents face-down on the glass. And the scanner wouldn’t scan them! But he didn’t take the documents from me. He just sat there, growing visibly more and more impatient while he demanded I try it over and over again, turning my ID this way and that, until a beep finally issued from the scanner. Then he sat and watched as I went through the same process with my plane ticket.

Next, of course, I had to remove my shoes and take all electronics and liquids out of my luggage and place them in the plastic trays to be sent through the conveyor belt into the x-ray thingy. I knew the drill. I got everything neatly separated into the trays and pushed my suitcase and series of trays over onto the conveyor belt, then stepped into the body scanner. (I tried to opt out of the body scanner one time, but they grabbed my junk, so I decided never again.) 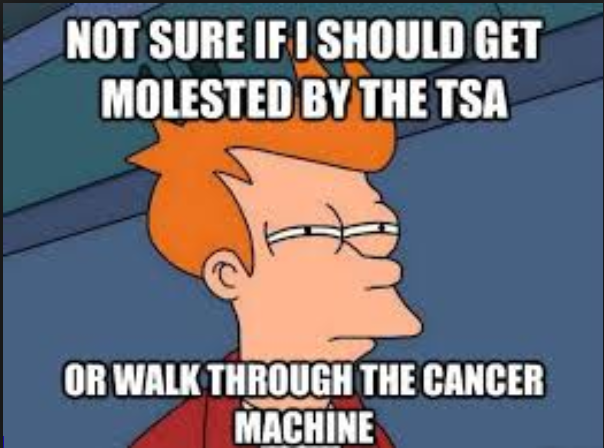 No sooner had I assumed the position (feet shoulder-width apart, arms up in a “don’t shoot” stance), then another agent demanded I exit the scanner the same way I’d come in. I was confused. This wasn’t procedure. Turns out what he wanted was for me to manually push each one of my trays and luggage pieces through the conveyor. Two agents stood idly on the other side of the luggage scanner, blue-gloved hands dangling useless by their sides.

Now I was starting to catch on. The TSA agents in charge of swabbing laptops and grabbing people’s junk at this particular airport had a new, unspoken rule: they would not touch anything. Not even with their hands swaddled in blue latex.

The change must have sprung out of COVID concerns, but still, it made no logical sense. We, the travelers, were doing one hundred percent of their jobs for them. In other words, we were in charge of inconveniencing ourselves, surveilling ourselves, and subjecting ourselves to indignity. If the scanner showed something suspect in our luggage, we would probably be expected to grab our own junk. Lazy tyranny.

There is only one reason why tyranny would ever be lazy, and that is because the tyranny’s subjects are so thoroughly indoctrinated, so unquestioningly obedient, so completely subjugated as to remove all need for diligence in enforcement.

And maybe that was always the long-term goal. The reason for the Homeland Security Act and the very existence of the TSA: to acculturate Americans to self-policing, self-enforcement of unjust and ineffectual regulations.

In the sociopathic world of national governance, it’s a ruler’s wet dream: to eventually achieve an environment in which the cattle leads itself through the turnstiles and into the slaughterhouse.

And the events of the past two years have made it far, far worse.

If I had told you in 1992 that in ten years’ time you would be technologically disrobed by government agents before being allowed to fly, you probably wouldn’t have believed me. Likewise if I told you that the CIA, FBI, and all manner of government agencies would have carte blanche to listen to and record any and all phone calls you make or receive, without any reason whatsoever. And yet, 2002 came around and these things were done to us. “Temporary,” it was supposed to be. Yeah. We all know how that turned out.

Let’s say I came to you in 2010 and told you that in ten years’ time, governments around the world would unilaterally close stores, restaurants, schools, churches, libraries, parks, and theaters. That people in most countries would be ordered to stay inside their homes at their governments’ whims. That individuals would be required to present a health certificate in order to enter a cafe or attend a musical performance. That those businesses and venues would be required to enforce it. That free countries such as Canada and Australia would imprison their people within their borders and not allow them to leave by land, air, or sea. That the president of the United States would get to decide who of the country’s citizens deserved the right to work. Would you laugh at me? Dismiss the warnings? Would you say “that can never happen here”?

Most of us probably would have regarded such warnings with a mixture of amusement and doubt. And yet, here we are. Facing once again a collection of draconian, “temporary” measures that will NEVER—if the elite who enacted them remain in charge—be undone.

In twenty more years, if we allow it, people will be just as acculturated to economic despotism and medical tyranny as we are now to airport indignities. By then, we’ll be about to the point where the tyrants can just rely on us to shut down our own businesses and lock ourselves in our own homes—no special directives from the governor required. By then, it won’t be a question of “should the government require people to get specific vaccines?” but “when does my quarterly vax pass expire?”

Lazy tyranny is at our doorstep. It has already wedged its foot in the door—a foot shod in bedroom slipper, not jackboot. Once it fully shoulders itself inside and makes itself comfortable, there’s no stopping it. 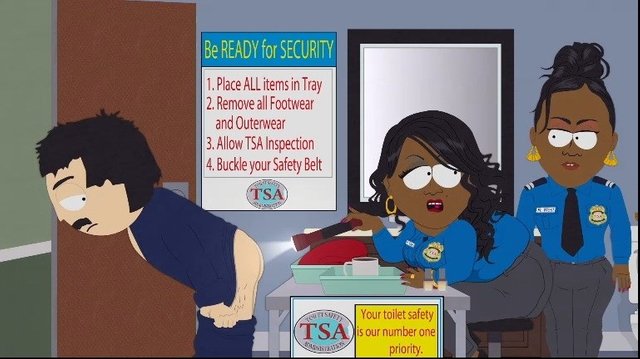 I write a lot of stuff, but not all of it makes it onto the HIVE blockchain. Make sure you never miss a single essay, short story, or novel chapter by subscribing for free to my newsletter.

Oh do we both think alike, or what! Yes, excellent point with the airport legacy that stayed with us since 2001. Now they are gradually turning up the heat. And being lazy (hahaha, I actually believe this laziness is careful strategy), it is up to us to screw ourselves, and then pay for it.

I take it you're familiar with the movie Full Metal Jacket: 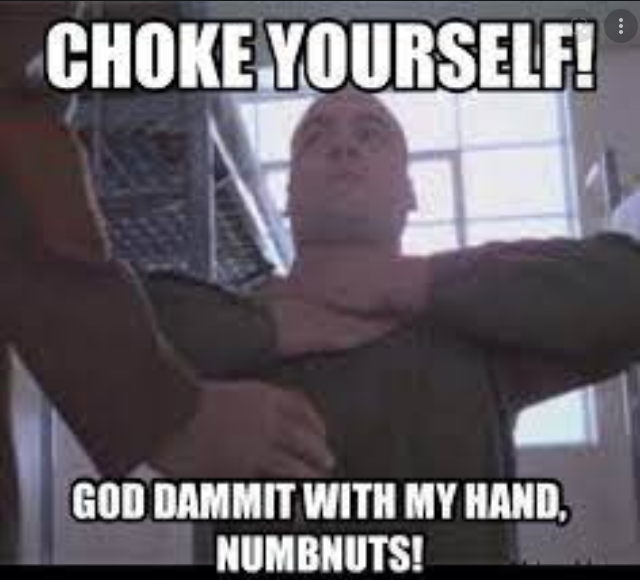 I take a different view than yourself... I don't believe it's lazy tyranny as much as the Government trying to show that it's providing its citizens with security. The really frustrating thing is that I would put money on the fact that if you surveyed all travelers 99% do not feel safer and would rather not take their shoes off and take their stuff out of their bags.

It makes me so mad every time I had to do it... I honestly feel less safe, having my possessions out of my eyesight... especially these days when there is so much information on our devices.

Personally I'm happy that TSA isn't touching your stuff (sorry that it was so ridiculously awkward for you, that truly sucks) but I don't want these people touching anything of mine... not even my smelly airport shoes.

P.S) Southpark has given us SO MUCH.

Tyranny can be eliminated when we wake from our lazy apathetic stupor and join in a global unified non-compliance. Tyranny continues only when good people do nothing. We only have ourselves to blame for its continuation.

I made the mistake of flying once after 9/11. I became so enraged at the sight of my young children being inspected in submission postures that I very nearly came unglued and ended up in Gitmo (I'm sure they would have indefinitely detained me had I lost it). What angered me most was when they waved some wand near them, as if they were suicide bombers.

Couldn't agree more ! We just had to travel from Perú to Bulgaria. And oh my god, we had to go through 7 controls in Peru and in Romania just one very crazy one. If you ask me, it's about indoctrinating people as you've said, but also conditioning them on not doing international travel.

Because this expands your worldview and connects people from different parts of the world. I believe it connects the whole world, they couldn't ban it so they decided to control it, but now times are different.

Since we got here we've been working on developing a decentralized governance system that would help people tip the balance of power in our favor. We will be implementing it into a Dapp very soon.

This and many other problems all coming from the centralization of power can be solved i feel but we need to act more.

We are on testing phase and would love to have more people to join so we can test the system. A token will be created for participants as well.

Here is our whitepaper : https://ecency.com/hive-153630/@atma.love/matrix-8-white-paper-abstract?ref=atma.love :)