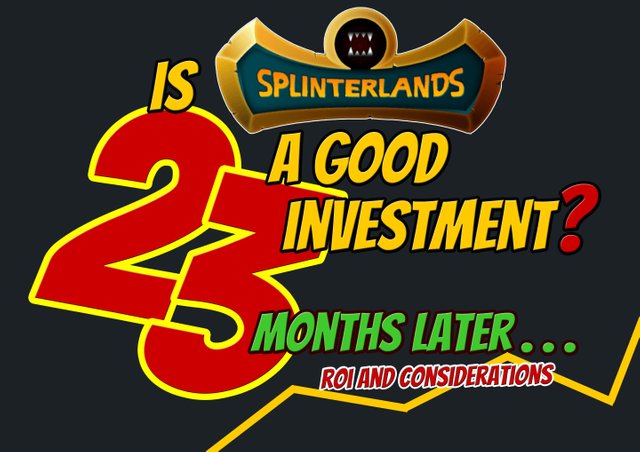 It was October 18, 2019 when I decided to spend $10 to buy the Starter Set (previously called the actual Spellbook).
With Splinterlands I discovered a new world, a world I didn't know before: the beautiful world of blockchain-based games.

In the landscape of blockchain-based games, Splinterlands is a game unlike many others because at the core of it all and beyond all the features introduced later there is a card and strategy game that is fun to play.

Today more than 23 months have passed since the day of my first battle, that first battle was followed by 13515 other battles.

I played an average of just over 19 battles a day, and after 13516 battles I still enjoy playing Splinterlands as much as I did the first day.

Today Splinterlands game assets are many more and to the cards and DEC tokens have been added over time:

Soon will be released also Voucher tokens useful to participate in the presale of the new collection of Chaos Legion cards.

When I like a game, a project or an activity, I also like to write and share my progress and my considerations and that's why for 23 months now I publish a monthly report in which I consider Splinterlands only from the financial point of view and completely leave out the play aspect of the game.

And here I am with my twenty-third report on Splinterlands.

Note: In the numbers of this report the comma "," and the dot "." are both decimal separators.

Below are the topics I will be covering in this my monthly report:

In the following image you can see the results in terms of ROI and Profit that I calculated and recorded in my previous report (September 16, 2021). 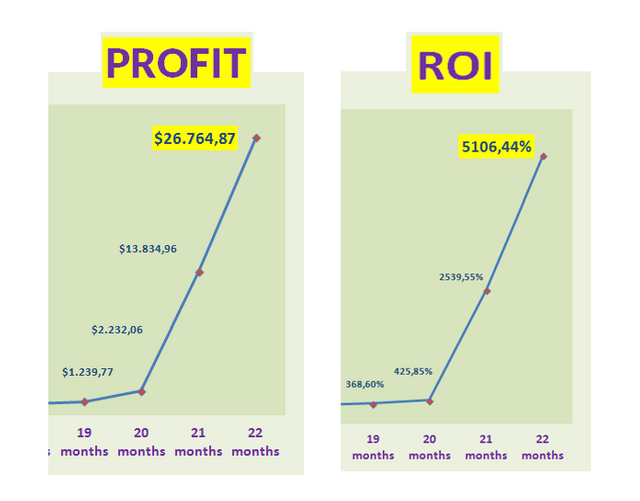 The results I have obtained after 22 months since my registration on Splinterlands and up to September 16 have been really good results for me especially when compared to my total cost of investment:

Now, at the same time as writing this report of mine, I will proceed to evaluate my investment in Splinterlands to date.

Evaluation of Splinterlands as Investment

Analysis of each investment involves calculating and comparing costs incurred and revenues obtained.

Note: In calculating the total investment cost I only consider the costs I incurred by injecting external liquidity into the game.

Since the date of my last report (September 16, 2021) and until today, October 12, 2021, I have not injected external liquidity in my investment on Splinterlands and for this reason the total cost of my investment remains unchanged from my previous report: 524.14$.

The total revenue earned from my investment on Splinterlands is the sum of the following values:

How much is my card collection worth?

In fact, the value of my card collection is displayed in the My Cards section of the Peakmonsters website (https://peakmonsters.com/@libertycrypto27/cards).

Since I write a report every month I have been able to monitor the value of my card collection almost monthly.

What is the value of the DEC tokens I have in my wallet?

In my in-game Splinterlands wallet I have a total of 111933 DEC tokens.

Revenues from the sale of DEC tokens on Hive Engine

I have almost always used the DEC tokens earned from battle victories and the sale of my cards in the purchase of cards and card packs with the goal of upgrading and improving the battle strength of my card collection.
On one occasion (October 5, 2020) I sold 81000 DEC tokens to do a Power Up on Hive and thus increase my amount of Hive Power (HP).
From that sale I received 400.14 HIVE in return which, at the time of the sale, had a value of $64.8.
Unfortunately I can't go back in time otherwise I would have performed the reverse transaction :)

How much are my Plots worth?

In the last three months all the assets of the Splinterlands game have acquired a lot of value and also the value of the plots has followed the same trend.
And to think that initially the plots could be purchased directly from the Shop section of the Splinterlands website spending only $20!
The Plots have all been sold and already for some time. 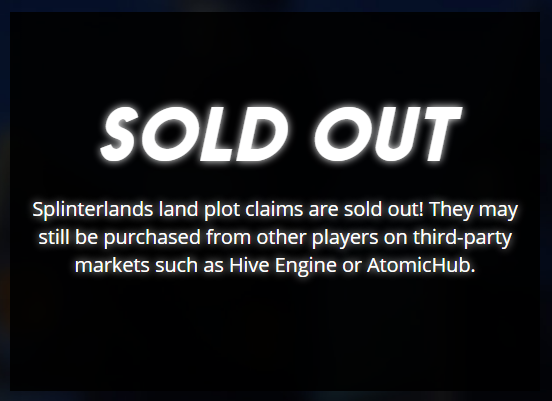 Now those who want to buy a plot can buy it exclusively from the markets outside the Splinterlands game.
Today September 15, 2021, the lowest sales order for a Plot on Hive Engine is 725 HIVE whose dollar value is $558.97.

Those who have bought so many plots and especially those who have used the credits (dollars) to purchase plots have made a really great investment.
A plot that could be bought for 20$ at the end of the year 2020 is now worth 558.97$!

For the purposes of calculations in my report I will consider the value of the best purchase offer (Highest BID) on https://hive-engine.com/?p=market&t=PLOT which is 694 HIVE.

Leofinance (https://leofinance.io/) is one of the most active and well-known communities on Hive and has created and developed a decentralized finance (DeFi) platform called CubFinance (https://cubdefi.com/).
On CubFinance I have put 24000 DEC tokens to work within the DEC-BUSD LP (V2) Farm.

The value of Splintershards tokens (SPS) obtained from the current airdrop

Value of card packs purchased but not opened

A while back I bought 100 packs of cards from the Untamed collection in bulk from the Shop section of the Splinterlands website, and as a bonus I received 10 free packs of cards. 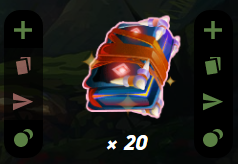 The total value of the 20 packs of Untamed cards in my possession is 1091$.

A little bit of calculation...

I have now collected all the data I need (Total Costs and Total Revenues) and I can calculate the profit and ROI that I got from my investment on Splinterlands after 23 months.

As you can see from the calculations in the following image the Profit that I have obtained after 23 months on Splinterlands is 36725.40 $ (previous report 26764.87 $)

From September 16 to today October 12, 27 days have passed.
In 27 days the profit has increased by almost $10000!
Splinterland happily continues to surprise me :)

Month by month history of my investment in Splinterlands

Below you can see the history of my personal investment on Splinterlands from month six until today September 16, 2021..

The trend of PROFIT from the sixth month onwards was as follows:

The ROI trend from month 6 onwards was as follows:

Splinterlands continues its run and all of its assets continue to grow in value such as SPS tokens which just a few weeks ago were worth around $0.25 and are now worth $0.83. 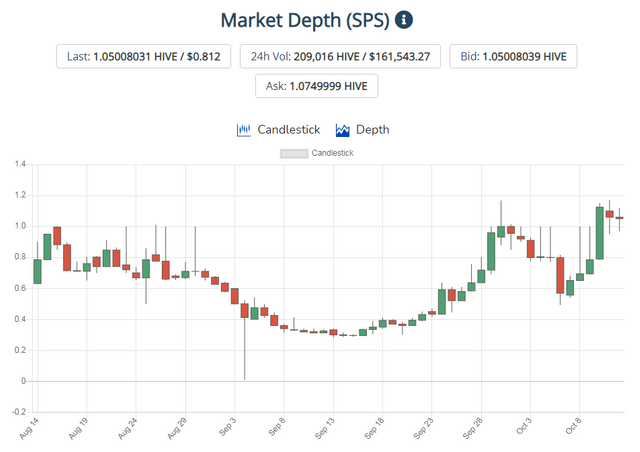 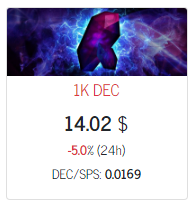 I'm really very pleased to have believed and invested in the Splinterlands game and I think the best is yet to come....

Splinterlands is a concrete example of all that a blockchain-based game can offer to its players:

Sooner or later the blockchain based games model will be the dominant model in the videogames industry, it's just my personal conviction and it will take some more time but the overtaking of blockchain based games on centralized and traditional games will happen and when it happens I hope to be in the first row.
If you have never tried a blockchain-based game I invite you to read a post I wrote not long ago in which I expressed my thoughts on blockchain-based games and compared two games similar in gameplay but very different in their structure: Splinterlands and Hearthstone. 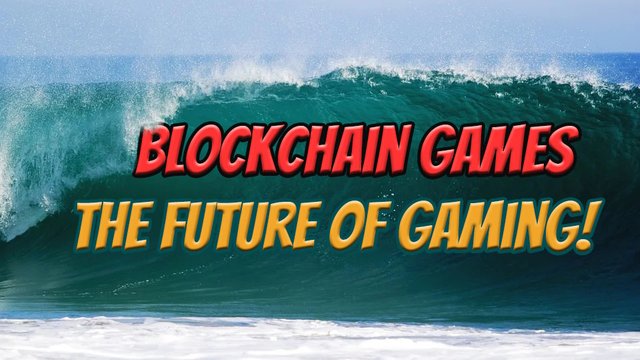 Photo in the background of Free-Photos from the site Pixabay - edit by @libertycrypto27 - font used is Open Source
Link Post: https://peakd.com/hive-131619/@libertycrypto27/blockchain-games-the-future-of-gaming-il-futuro-dei-videogames-engita

But do those who sign up today still have a chance to make a good profit?

The first players to have believed in Splinterlands and its potential have really made a winning move from all points of view.
Those who enter a successful project like Splinterlands later will obviously grow less quickly than those who built a collection of cards with a few dollars but Splinterlands still has a lot of potential and still has a lot to offer to its players including new players.

The advice I always give to new players is to be "Smart" players and look at Splinterlands as a nice project within a great ecosystem that is the Hive blockchain.

Those who only play will grow slower in the game of Splinterlands especially if they have decided not to invest external liquidity in the game.

Those who are smarter, for example, in addition to playing the game will also participate in weekly contests organized by Splinterlands on the Hive blockchain. In this way he will grow much faster than a simple player and at the same time he will discover and get to know the beautiful and large community of Hive and the many other projects on Hive.

Will ROI and Profit grow in the next month or will they suffer a decrease?
Follow me to find out ;)
I hope you liked this post and thank you for taking the time to read it :)

Are you not a Splinterlands player?

Splinterlands is a beautiful game and it has proved to be a very good investment (at least until now) and if you regularly participate to the weekly contests organized by the @splinterlands account you will recover the registration cost (10$) in a short time.
If you decide to register, you can do it from this link:
https://splinterlands.com?ref=libertycrypto27
of course if you'd like to use my refferal link... :)

Any game that involves the purchase of cards and tokens is never a simple game but it is also an investment and should be considered as such.
I am not a financial consultant and if you decide to invest in the game of Splinterlands you do it for your own choice, after having made your personal evaluations and considered all possible risk factors.

My advice is to always invest only what you can afford to lose with a light heart.

See you on the battlefields of Splinterlands.

A selection of my previous posts on Splinterlands

Unless otherwise indicated, the images in this post are screenshots taken from the sites:
https://splinterlands.com/
https://www.splintercards.com/
https://peakmonsters.com/
Images containing calculations and formulas are my property
The font used in my images or edited by me is Open Source

HIVE ON and Splinterlands ON!

+ Consigli per i nuovi giocatori

Photo in the background of Free-Photos from the site Pixabay - edit by @libertycrypto27 - font used is Open Source
Link Post: https://peakd.com/hive-131619/@libertycrypto27/blockchain-games-the-future-of-gaming-il-futuro-dei-videogames-engita

Consigli per i nuovi giocatori