dCrops: What is the value of 1 point Share? How to calculate it and why it is important! + Focus on Fall Seeds (ENG/ITA) 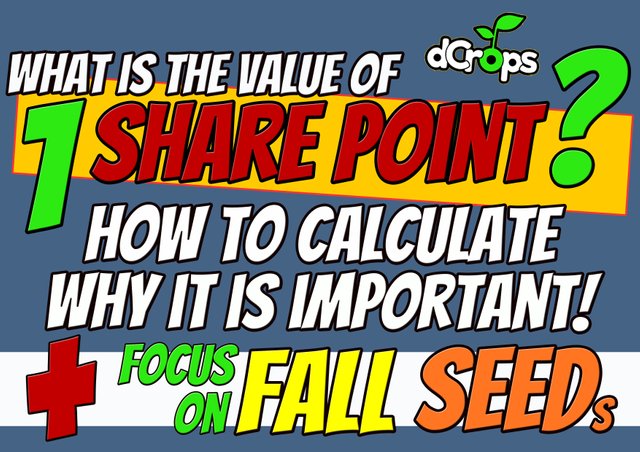 How to calculate it and why it is important! + Focus on Fall Seeds and the utility of SHARES/HIVE ratio

dCrops is an NFT-based farming game developed and built on the blockchain of Hive.
On August 25, 2022, dCrops entered the Beta phase and the opening of BETA packs added new NFTs of different types into the game.

Before the BETA phase on dCrops it was only possible to play the Farming mode, and the NFTs that could be used in the game were mainly of two types: Seeds and Lands.
In the Alpha phase there was also a third type of NFTs, the Resource NFTs, but they had no use within the game dynamics while today they are usable.

Today there are 6 types of NFTs:

Currently it is possible to use:

It is not yet possible to use the Cooking mode and the crafting mode linked to the cooking mode because it is under development. 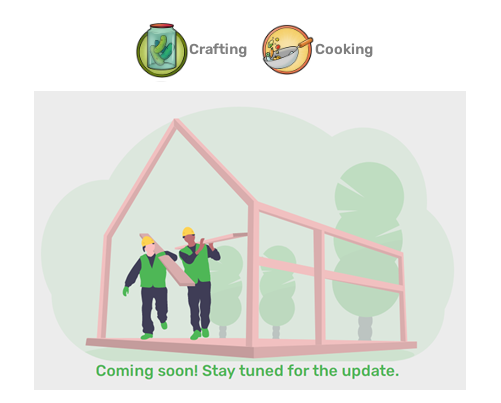 When all game modes are implemented each dCrops player will be able to freely choose whether to specialize in one mode or multiple game modes.

For now, the fully functional game mode is the Farming mode, and in my post today I will focus on some aspects of that mode.

The topics that I will discuss in this post are as follows:

SHARES points are not tokens but are an important in-game currency because they allow you to enter the Leaderboard and earn, upon completion of the game season, a CROP token reward that depends on the amount of SHARES points earned by each player during a single season of dCrops.

Have you ever asked yourself how much a SHARE point is worth?

I do because the value of a Share point is an important element to consider when choosing whether to buy one NFT over another and it will be even more important when all game modes are active to choose which game mode to bet on.

The value of 1 Share point is not a fixed value because:

It is also not possible on Dcrops to see the previous season's leaderboard as it is on Splinterlands, for example.

On Dcrops it is only possible to see the current Leaderboards.

The calculation of the value of 1 Share point would be super easy if there was the possibility to see the results of the previous leaderboard and also it would be an element to choose what and how to invest in and therefore having this information available at all times would be an incentive to invest.
For this reason I hope @dcrops will add this information in the future on the site.

Then I took the same screenshot when the season ended and when the rewards were distributed.

Calculating at this point the value of 1 Share point is easy and it is sufficient to do a simple proportion.

To show the usefulness of knowing the value of 1 Share point I will use a simple practical example: the evaluation of the purchase of 1 Mystery Seed.

In the Shop section of dCrops you can buy Boosters which are individual items useful for improving farm production.

Thanks to the calculation of the value of 1 Share point I can know whether buying a Mystery Seed is a good purchase or a bad purchase.

If I use a Mystery Seed in the current season 75% of the time it will turn into one of the following seeds:

Why should I spend 40 CROP to buy a Mystery Seed Booster that will earn me 75% of the time an amount of CROP tokens between 5.38 and 7.53 units?

Better to use Mystery Seeds obtained from completing quests instead of buying them ;)

When dCrops was in Alpha version there were a total of 25 usable seed cards and only 5 seed cards could be used during a season.
Now in each season there are 12 seed cards that can be used and in the following image you can see the 12 seed type cards that you can use in the current season on dCrops which is autumn.

Those of you who read my posts know that I like to do calculations and evaluations, and in the past I have shown the criterion I choose to follow for selecting seed cards to buy, a selection criterion that is based on the calculation of the ShARES Points/HIVE ratio.

The SHARES Points/HIVE ratio indicates the minimum number of Shares points obtainable from the use of a Seed card during a season for each HIVE token spent in the purchase of the Seed card.

Several months ago I had created with my spreadsheet a table for each season of dCrops to calculate the SHARE Points/HIVE ratio of each Seed card.
Today I updated the table for the fall season and added the new BETA seed type cards.
I also added the calculation of the SHARE Points/HIVE ratio in the case of purchasing Seed cards using CROP tokens as the payment method in order to make the comparison between the two usable payment methods (CROP vs SWAP.HIVE).

In the following image you can see the updated table.

The first useful information you can get from looking at the data in the table is that it is almost always more convenient to use SWAP.HIVE tokens as a payment method to purchase a Seed card instead of CROP tokens.
The only two exceptions are the Thyme and Sage cards, which have a lower price when purchased with CROP tokens. 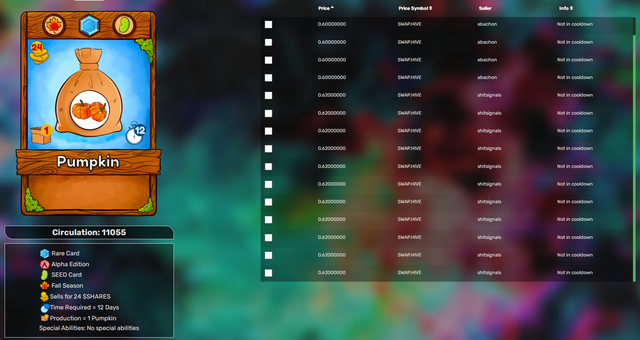 This means that for every HIVE spent to buy a Pumpkin card you will get 40 Shares points whose value during the previous season was 21,529 CROP.

Based on the SHARE/HIVE Points ratio, the worst purchase is the legendary card Sweet Potato because its high market price produces as a result a really low value of the SHARES Points/HIVE ratio: 0.68.

Important Note: The calculation of the Share Points/HIVE ratio is a good purchase indicator for the farming mode of dCrops and thus for players who have decided to specialize only in the Farm mode of dCrops.
When the Cooking mode will be active, it will be necessary to make other evaluations.
In addition, the player who also wants to easily complete the Seasonal Quests and who will also want to specialize in the new game modes (Cooking, Crafting, ...) will have to try to have a varied and large enough collection of NFTs.

Before concluding the writing of this post, I want to share the opening of the 15 chests I received as rewards for completing the Quests of the summer season.

Until now I have never found a Resource Gold Ore card and I hope to find it today.

In the following image you can see what I found in the 15 chests I opened today. 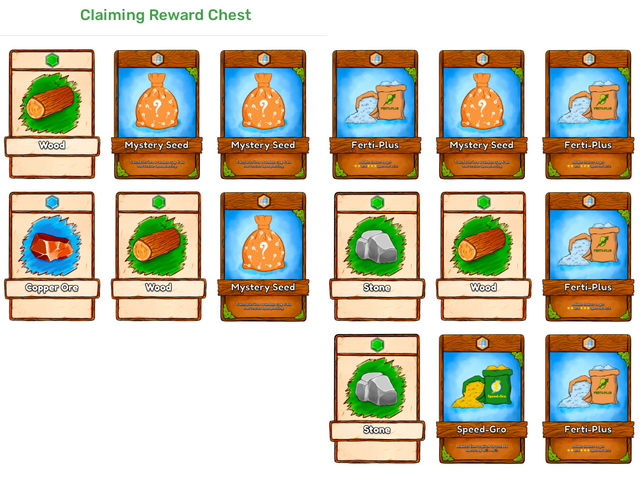 Again I wasn't lucky and didn't find a Gold Ore card but sooner or later I will find it ;)

Inside the chests I found:

Dcrops more than a game is an investment and mainly as such should be considered.
In every kind of investment there is always a risk factor to evaluate and consider.
I am not a financial advisor and my post does not want to be in any way an invitation to invest on Dcrops but it is just the analysis and sharing of my personal investment and my personal evaluations on Dcrops on september 23, 2022.
My advice is to always invest only what you can afford to lose with a light heart!

A selection of my previous Dcrops posts

You can find the full list of posts on dCrops that I have published on my Hive blog at this link: https://peakd.com/@libertycrypto27/posts?filter=dcrops

Unless otherwise indicated, the images in this post are screenshots taken from the sites:
https://www.dcrops.com/
Images containing calculations, tables and formulas are my property
The fonts used in my images or in images edited by me are Open Source
The dividers with the Hive logo in this post were created by me and if you like them you can use them too, the Hive logo is property of https://hive.io/

A selection of my previous Dcrops posts

You can find the full list of posts on dCrops that I have published on my Hive blog at this link: https://peakd.com/@libertycrypto27/posts?filter=dcrops


How long is one minute?
It depends on what side of the bathroom door you're on.
Credit: reddit
@zottone444, I sent you an $LOLZ on behalf of @libertycrypto27

This post was shared and voted inside the discord by the curators team of discovery-it
Join our community! hive-193212
Discovery-it is also a Witness, vote for us here
Delegate to us for passive income. Check our 80% fee-back Program
0

Yay! 🤗
Your content has been boosted with Ecency Points, by @libertycrypto27.
Use Ecency daily to boost your growth on platform!

thepimpdistrict
4 mo
You must be killin' it out here!
@entrepidus just slapped you with 5.000 PIMP, @libertycrypto27.
You earned 5.000 PIMP for the strong hand.
They're getting a workout and slapped 2/2 possible people today.

thepimpdistrict
4 mo
Aw man @libertycrypto27, you are out of PIMP to slap people.
Go Stake some more and increase your PIMP power.
(We will not send this error message for 24 hours).


Why are rainbows always so cheerful?
Because they just got out of a prism.
Credit: reddit
@entrepidus, I sent you an $LOLZ on behalf of @libertycrypto27