Got A Brain? Prove it.

Join the POB side of HIVE.

Proof-of-brain (POB) is arguably one of the best Hive-Engine tribes, and it's only been around for a month or so. I found out about this new H-E gem by @trumpman, who is probably one of the best accounts to follow if you're looking to stay tuned with the latest developments in the HIVE ecosystem.

If you're looking to receive fresh, up-to-date information about giveaways, airdrops and new promising projects, keep an eye on that man's blog posts.

So, I took my chances and started using the ''proofofbrain'' tag in my blog contributions, and there you have it. + $542 within a month just for using another tag.

I'm telling you, the HIVE ecosystem offers amazing possibilities to monetize your content. You just need to keep your eyes open at all times.

For those of you who haven't delved into the details yet. Sounds interesting, no?

POB is a pure 100% Proof of Brain (PoB) token meaning that the only way the token enters circulation is through PoB rewards that are earned by posting and by curating content with POB staked. 1 token has been issued to @proofofbrainio to enable staking. There will be no more POB tokens issued except through PoB rewards. Like Bitcoin mining, rewards decrease by 50% every 4 years. There are no proof of mining or proof of stake rewards. There will be no tokens issued to a founder or a team. There is a 10% beneficiary percentage when posting on proofofbrain.io. Funds from the beneficiary rewards will be used to maintain proofofbrain.io.

POB is now my most valued H-E asset, and I've been earning and staking POB for less than a month. Thankfully, I have been staking all my earnings since day one and never sold a single POB token. I'm planning to keep stacking and staking, as POB is more than just another generic tag to use in order to farm rewards for my contributions as far as I'm concerned.

POB has the potential to do amazing things.

Do you see that? Apparently, this has been the norm.

POB has been climbing up since the very first days, and it's quite reasonable taking into consideration the unique tokenomics of the project. The fact that it combines characteristics of BTC and HIVE makes this a very interesting experiment, and I believe there's a lot more to come as more and more HIVE users are getting genuinely interested in POB.

Even @onealfa started using the tag recently and even created a POB curation account, @onealfa.pob. Now, can you imagine what it would mean for POB if he decided that he wants to be a POB whale? BOOM, explosion imminent. Just imagine what happens if we get a few more powerful investors interested in POB.

As a matter of fact, POB has been racing since the very beginning. The token's supply makes it relatively easy to pump, and the hype around it is adding to the price frenzy. 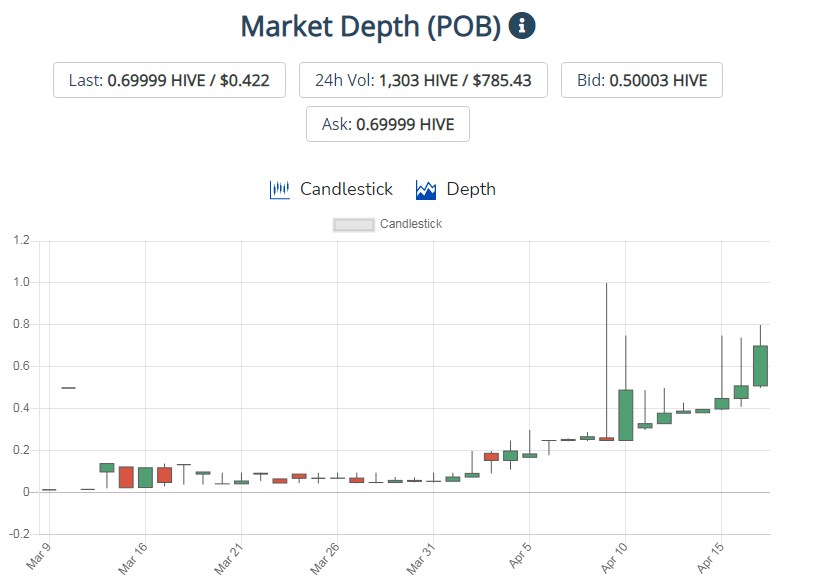 And that's just for starters. We are talking about dramatic growth, and we are just getting started if you ask me. I have managed to accumulate 1,277 POB so far, but I'm not interested in selling my stake. At all.

That's because I believe the project has great potential given its uniquely combined characteristics, but also because my 100% upvote is worth approximately 4 POB. This basically means that I earn more than 30 POB per day through curation and author rewards, which equals approximately $13 per day. I don't think I earn that much in HIVE or LEO.

It started out as an interesting experiment for me, but now it has already become my main source of revenue on the HIVE blockchain, and it's only been a month or so. That's why I'm staking all my POB rewards; the early bird catches the worm.

What can we expect?

Nothing is guaranteed, but I have a great feeling for POB's future. Will be very interesting to see how this all plays out in the following months, but I believe we've already gotten a taste of what POB can do.

Therefore, I think there's nothing to lose if you just start using the POB tag and earning some POB for your HIVE blog posts. You can choose to do whatever you like with it, but I would suggest holding and staking it. The signs are good, and it's still quite early in the POB game.

Personally, I am on a mission to become a POB whale, so I won't stop buying cheap POB from H-E and staking all my earnings. There's a long way to go, but I have all the time in the world. ;)

Thank you for your attention.