Of Course They Can't

And now they are being open about it.

That's how you know we have already reached the point of no return. Nobody really knows what exactly they mean by that, but I think we can make some assumptions. Are we going back to GBP? Gold? Or is it time for China's YUAN to take charge? The US Dollar has been the world's reserve currency for less than 100 years, but printing the heck out of it comes at a price, and various political reasons are adding to the situation. 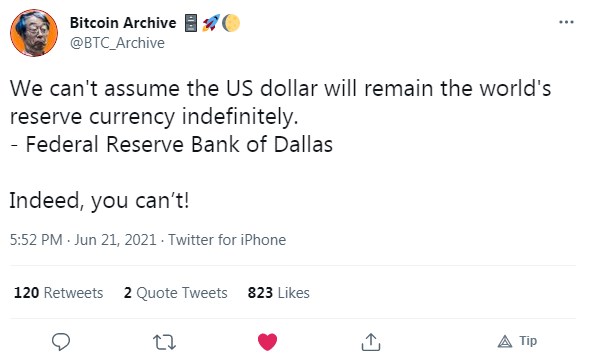 First of all, they can assume. They may be wrong or right, but it's definitely possible to assume it. Just like it's possible to assume that Bitcoin is going to be the next reserve currency, as more and more countries start bringing it into their mainstream financial system. Money as we know it is one of the oldest technologies we have, and it's safe to assume that it's time for it to evolve just like everything does. The internet is undoubtedly taking over our lives, so we can assume that the internet of money is destined to do the same.

Even if that's what the FED has in mind, I'm pretty sure they won't admit it, at least not for the time being. They are probably examining the possibility of having another sovereign, highly-centralized currency take the lead, only to keep the global financial system spinning in the same vicious cycle. That said, the problem lies in the structure of the current system and not in a particular currency itself, so not much is going to change for the average individual in that scenario. 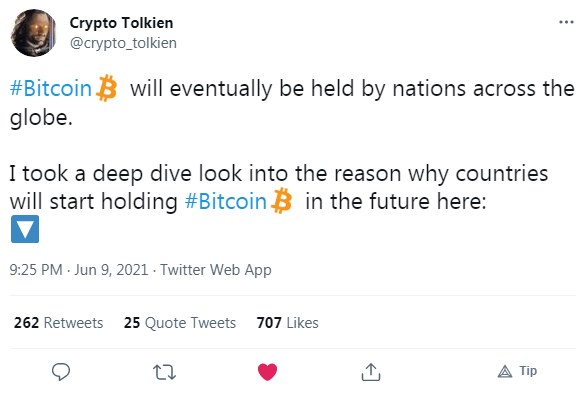 Even if central banks around the world decide to launch their own digital currencies, I don't think they are going to be hosted on public blockchains. That alone defeats the purpose, and the people who have found hope and true freedom in the cryptocurrency space are definitely not buying it. Such a model wouldn't benefit the majority of the population anyway, so if we are to make a change, we will have to actually make it and not just pretend it. Which is why we can assume that centralized digital currencies could never fix the banking problems we are currently faced with on a global scale.

Assuming more countries will follow El Salvador's example, starting with neighbouring countries with a lower income and underdeveloped industrial bases, and if the ''experiment'' goes well for them, we may witness a number of world powers losing ground, FOMOing and rushing to join the game before it's too late. I mean this is the exact way BTC gained popularity among individuals, and we may see this playing out the same way among governments and economies. I may be wrong, but it's possible to assume it.

One thing is for certain: the blockchain technology has the potential to disrupt the finance industry with electronic, decentralized, public ledgers that allow all concerned entities to securely evaluate information. Fraud reduction has never been easier, and this level of transparency is something the central banking system is not very familiar or comfortable with. There are way too many reasons why Bitcoin and company are much better alternatives, and this is not an assumption.