1 mill+ CUB minted. Do you hold tight or you panic sell? 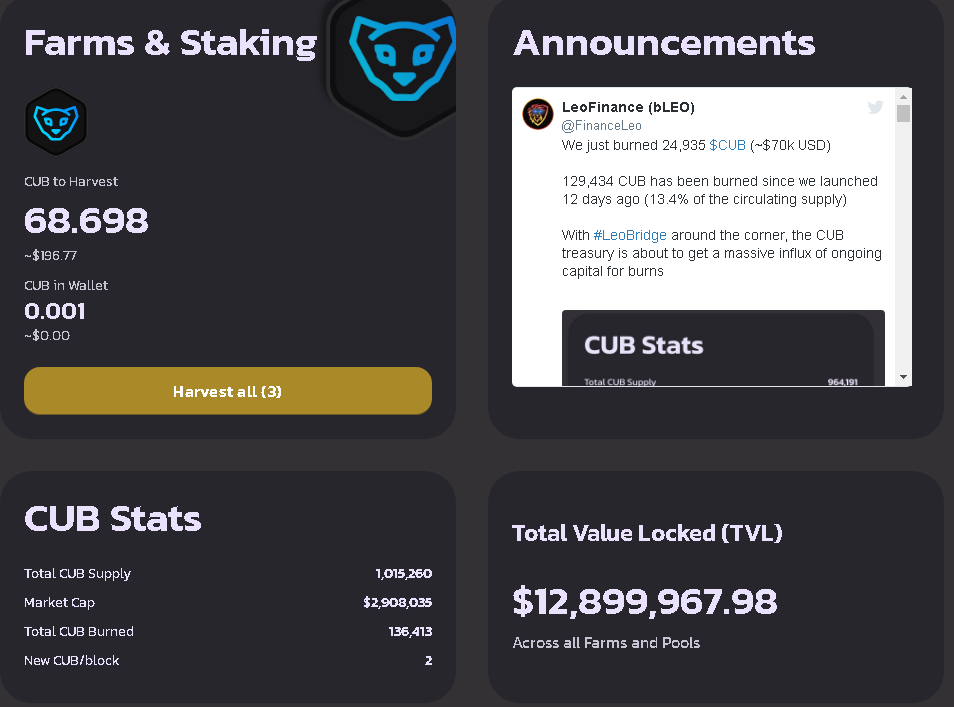 It's been almost ten days since the last post I made. I like to take small breaks from time to time but for a consistent blogger like myself, ten days without writing a single line is just too much. Perhaps I subconsciously do it when I have nothing worthy to say, unlike many people who keep being repetitive and would post almost anything just to earn a few more HIVE / LEO / ... whatever coin there is out there for grabs.

This time it was different though. I had so many things to say but I got distracted from this whole Cub Finance thingy which I was/am so obsessed with, that I set different priorities. What priorities you may wonder...and what does it have to do Cub Finance?

Many of you know that financially wise 2020 was absolutely catastrophic due to the pandemic. I had to shut down my small cafe and found myself in deep shit and debts out of nowhere. Thankfully, I was introduced to an accountant who specializes in cases like mine that helped me a lot. Took almost 50% of the debts off of my shoulders not by using tricks or anything of the sort. He simply found a way to "protect me" legitimately. By the book...

Long story short I came to a settlement with the state and 2 days ago was the final payment of that settlement. I am officially debt free. That of course had some side effects. I had to sell a large portion of my crypto holdings (that includes HIVE and some of my precious LEO) right when the bulls finally appeared after almost 3 years. You see the irony, right? In any case it is what it is.

As you can easily understand there wasn't much room for new investments and Cub Finance was about to be launched...and it seemed so damn attractive. I had to find a way to go relatively big in this new form of mining, for me at least, because the 38 tokens from the airdrop just wasn't enough plus the APR the first couple of hours was completely insane. One could literally double their investment in a day as along as they jumped in the pools right from the start.

So I killed some last shitcoins I was holding and instead of writing posts I used those last funds to scalp trade. It only gave me more white hair as I chose to scalp trade BTC using futures at Binance. You all know how volatile BTC is. One wrong choice is all it takes to get rekt in minutes. Thankfully and almost 3K scalp trades later, I've managed to earn a decent amount of money that allowed me to jump in those pools from day one and to farm more than 100 CUB per day at the time of writing.

Are you even serious?

Your only concern should be to farm AND hold as many tokens as possible before real whales jump in. A few hours from now where the halving will be implemented, will feel as if a huge whale decided to jump in those pools and took away half of your rewards. Take advantage of these ridiculously high APRs and keep compounding.

Wanna know what I do? Instead of adding to the CUB den my daily harvests, I keep bringing in BSC as much BUSD as possible and add them to the CUB/BUSD pool which has the highest APR so far and what is left goes into the CUB den. And if scalp trading keeps going well I'll keep doing that...that's until BTC decides to head to the opposite direction from what I chose for my scalp trade...

As a matter of fact I might even change my strategy now that CUB is cheap. I might start buying CUB with a portion of those BUSD and throw them into the den too.

You see I want to posses as many CUB possible and I want do the very same mistake I did when LEO was in the realm of 2 cents and I didn't buy tons of it even though I knew that it has a great future.

My friendly advice? You need to think long term.

What did you expect really? That price would shot up to $100 in the first 2 weeks? CUB is roughly 2 weeks old and @khaleelkazi is trying to make us all rich in case you haven't noticed.

What do you think the impact on its price will be when #Leobridge launches and now that there will be half CUB for sale?

Be patient and accumulate as many CUB as possible. You are insiders...you know better...

Just imagine all those sinks both for CUB and the LEO token...13%+ of the circulation supply has already been burned. Expect that number to go up significantly the following days...

Of course none of the above is financial advice and you should do what you think it's best for you...but I have a feeling that you know what's the right thing to do.

In case you you don't know what the future holds for CUB and the entire Leo ecosystem go ahead and read my previous article.