Justin Sun made sure that there won't be any Steem proposals approved ever again. What makes you think that he cares about Steem really? - Long live Hive.

For the past 13 weeks, the only reason I used to login to my Steem account was to transfer my STEEM weekly payments from the power down I had initiated 3 months ago to the exchanges.

I know I did the right thing.

And if I could travel back in time I would have initiated this power down the very moment I read those rumors linking Justin Sun and Steemit.com.

When there's smoke there's usually a fire too...

So here we are...13 weeks later which felt like an eternity, my power down is finally completed. All I was left with is bitterness and some 70 SP just to remind myself how a super wealthy single entity managed to destroy a really promising project.

I have no regrets for the thousands of hours I spent on Steem. Besides it was my gateway to an entire new world. The world of crypto.

I stayed there and also invested in that project for everything it represented and stood for up until its acquisition from that fucker.

But when I realized that it's hopeless to fight for its survival...powering down my stake and never look back was the right thing to do. And I was one of the lucky ones, considering that there were people whose stakes was stolen overnight.

You know...some 65 or so accounts...most of them big stakeholders and witnesses...23 million tokens were gone overnight....Ya, I was definitely one of the lucky ones.

That place is a joke right now. Trust me on that.

For a moment I thought I should power down the remaining 70 SP I have sitting on my wallet, but then again I wanna be a pain in their ass from time to time and I wouldn't want to have RC issues when the time comes.

I took a last look at the top 20 witnesses on Steem...Most of them are a joke... 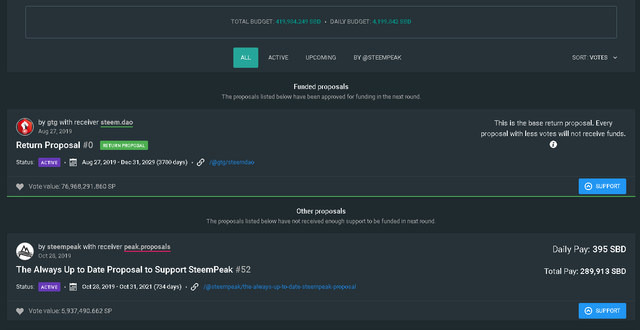 There is not a single proposal approved.

As a matter of fact there isn't even a new proposal submitted ever since the entire community migrated to Hive.

And wanna know the best part?

Justin Sun made sure that there won't be ANY proposal approved till the end of times. How? He simply used his ~ 70 mill SP and voted in favor of @gtg's return proposal.

What's left to be said really?

In case you had doubts whether moving to Hive was the right thing to do, I am telling you it was the smartest thing you could do. Period.

This guy obviously doesn't care about progress and development.

He is just showing off his power to everyone and wants them to know that he is in charge...

Amazing how he ruined all those cool things that people kept building for the past 4 years within weeks...