KHMER PRINCESS has been one of the my top desire card for a long time. However, it is very difficult to purchase cause it used to only have low bcx cards for sale most of the time so if u buy up to 115bcx, the price would double or even triple. Recently, i saw a maverick selling a max lv8 Khmer princess and I decided to heart-painfully depart with my $400 to purchase the khmer princess from the maverick.

What is the beautiful thing about Khmer Princess, it can have a tank heal and a triage heal both just for only 2 mana.

With the rule set of no melee, that means this match will be about range and magic. So that also means that even with snipe skill, the attack will mainly be the 1st or 2nd position. As that, i will play very defensively with 2 powerful reflectors in the 1st 2 slots. And Because the rule set is also an equaliser, that would be that healer will be super powerful, so that means Khmer Princess can be the perfect fit in this match with only 2 mana and so I can have more mana reserves for the other slots. Do note that 32mana match can consider quite the lower range of mid mana fights. 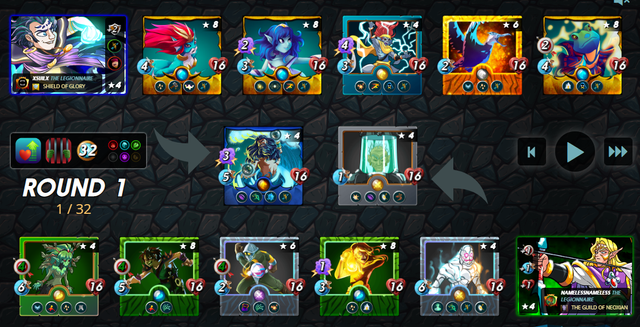 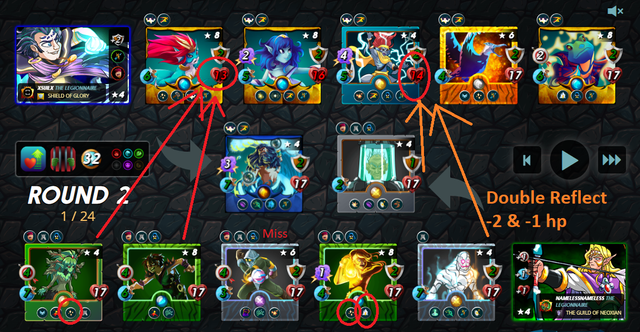 To be honest, when I first see the opponent chose Lir Deepswimmer to return fire + River Nymph to amplify reflection, i just think i am going to lose and skip the match. To my surprise, i won the game and so i went back to see the gameplay.
After one round, you can see that my spirit + child of forest focus on dealing about 8 damage to merdaali which can greatly recover back by the triage heal of 5hp. On the other hand, their ruler of the seas will face double reflection -2 and -1 damage due to the blast damage. 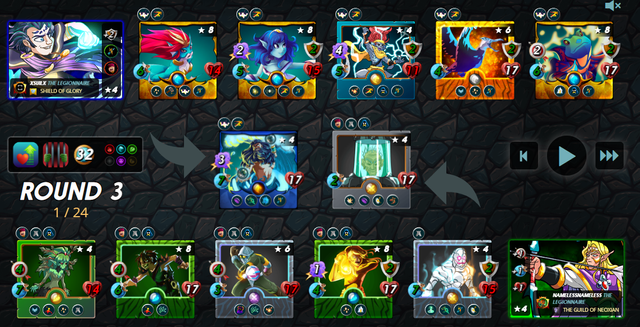 As you can see at the start of round 3, there isnt much changes as compare to at the start of round 2. This shows that the triage heal can easily offset my damages while i continue to take reflection damage. It seems like a battle of endurance as their ruler of the sea are also slowly being chip away. 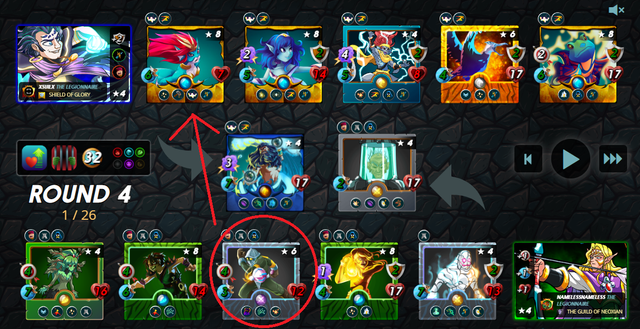 At the first of round 5, you will realise that merdaali had been taken down. This is the repeat of round 3 where merdaali suffered another net 7hp loss. However, also do take note that my grenadier is also dropping its hp fast as it also receive double return fire, -3 from oshannus and -2 from merdaali. 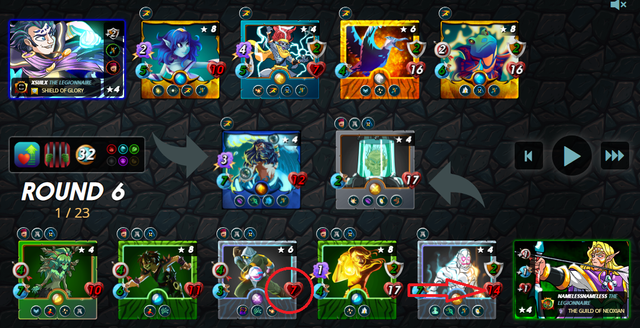 At round 5, Khmer Princess actually go and heal almo instead. My grenadier suffered cause another huge drop of hp(should be 4hp now instead of 7hp). What is important is that we need to take down albatross before our fire troop went down. Otherwise, there is a slight chance that they can outlast us with healing. 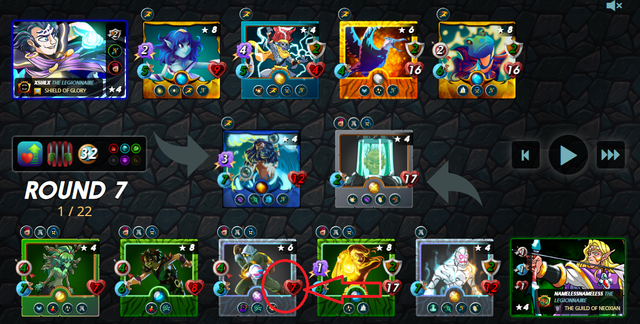 Nothing special in round 6, khmer princess now can heal grenadier so the 5hp triage heal can offset the 5 return fire damage, keeping its hp at 4(bug, not 7hp as shown). Meanwhile we continue to chip ruler of the sea hp away by the double reflection. 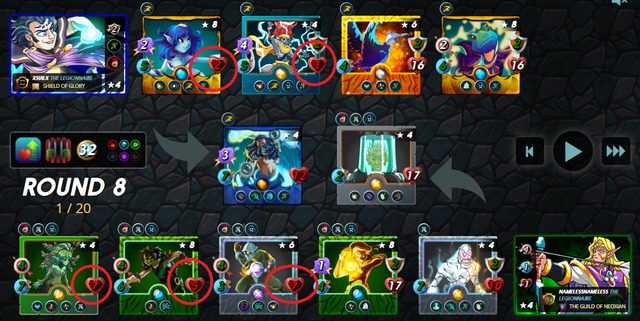 At the start of round 8, things have became super exciting. I should be able to take down river and ruler of the sea. But my 3 rangers are also low in hp. So i am worried if this amount of hp is enough to take down Albatross or not. 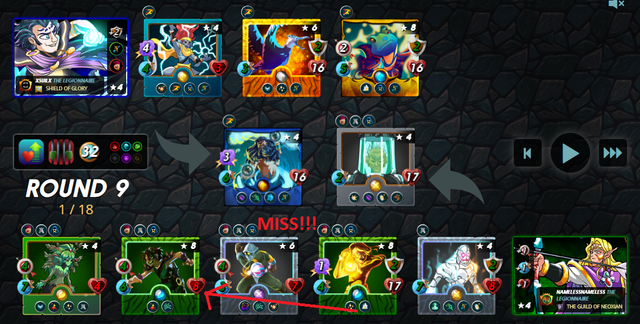 Interestingly, at round 8, my khmer princess actually go and heal the child of forest. That means my grenadier still have 4hp left, not in risk of dying yet. 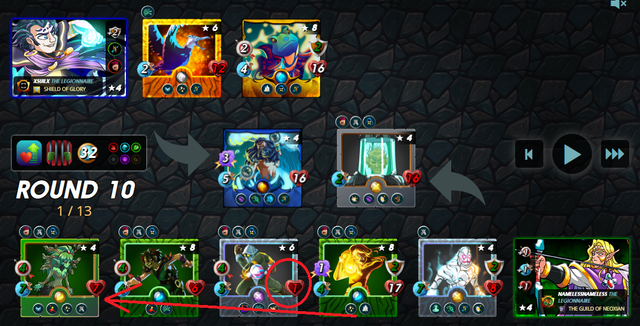 At round 9, interestingly again, this time round, the triage heal spirit of the forest instead. I was thinking that my grenadier is so dead when he successfully deal the blast damage. Instead of receiving 5 return fire damage, i only receive 3 and realise that river nymph is not longer around to give the increased return fire damage. So it magically survived with only 1 hp! 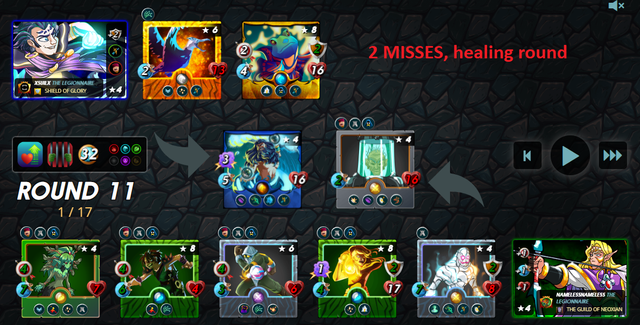 On round 10, 2 of my 3 rangers actually miss, giving more chance for my triage to heal my 1hp grenadier to prepare for the showdown!! With oppress skill, my grenadier will deal extra damage to albatross, making the removal of the fatal threat even higher chance. 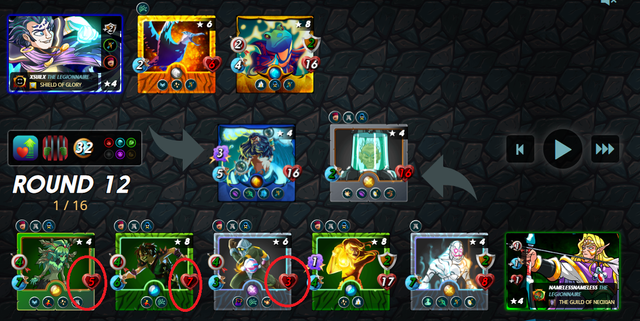 With my 3 range musketeers, they are bravely attacking albatross, overpowering the triage heal from angelic.

With the fall of albatross, it is a certain win on my side. Even if all my rangers are dead, with no tank heal, oshannus will slowly reflected to death and angelic wont be able to heal in first position.

MVP definitely belongs to Khmer Princess(defensive) and Grenadier(offensive).
The combo of both the spirit and the child of the forest are very powerful too. I will sure lose if i didnt use the snipe combo as the double tank heal can easily offset the damage.

Maybe instead of double reflection lineup, I should place almo in front and 2nd position is khmer princess + 3rd position is queen mycelic. In this way, i will have double tank heal, double triage heal + amplify the reflection damages.

!PIZZA for you too!

!PIZZA for you, fellow metafren