Your guide to dCity: SIM Power and SIM usage 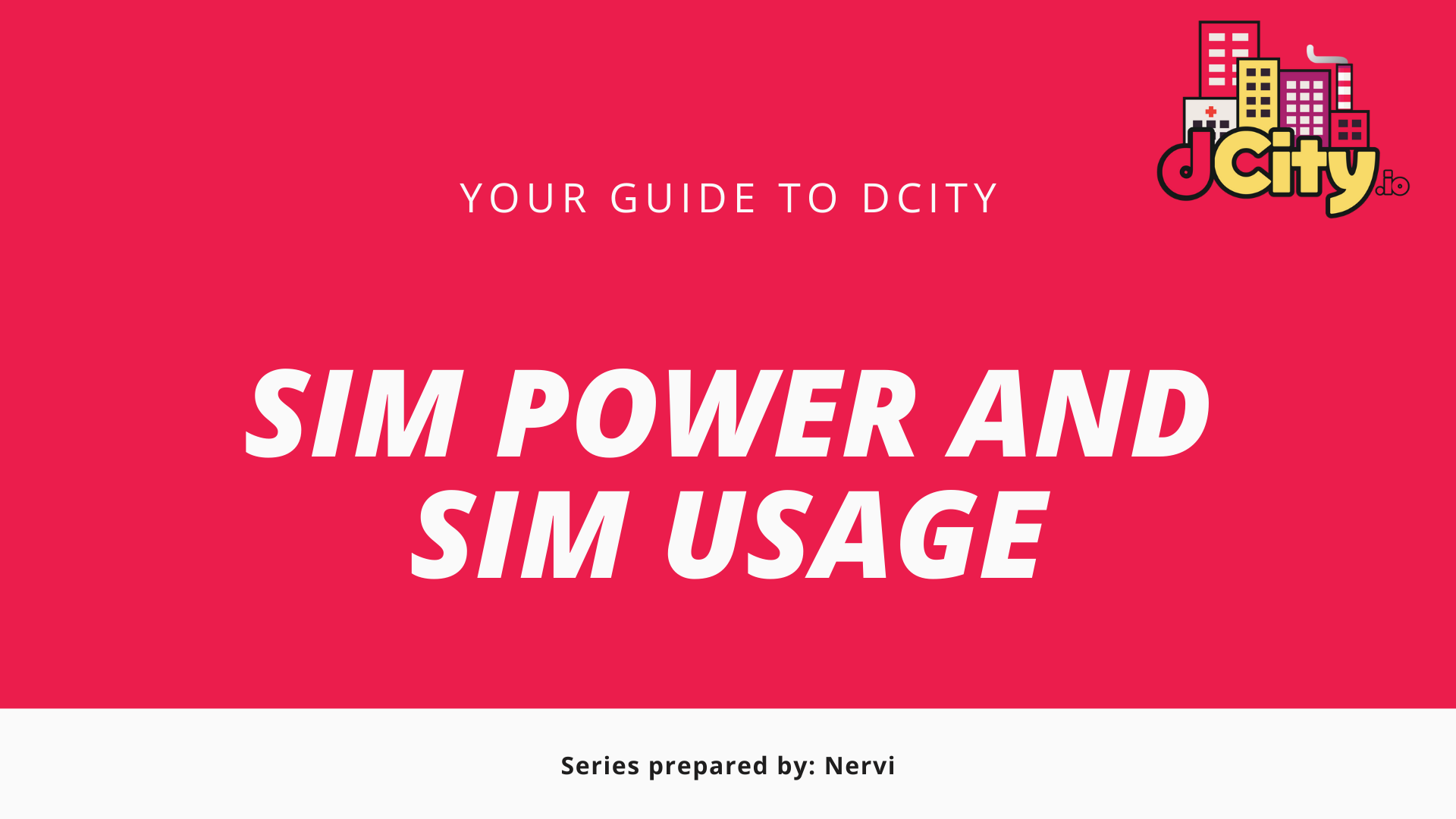 The vast majority of transactions on dCity are done via the SIM token. But did you know that in addition to simply paying SIM for cards, you can use this token for many other purposes? Today's post is a little less technical, but nonetheless equally substantive! I invite you to the next part of the dCity guide. Today we will look at the general use of SIM in the game and beyond and explain what SIM Power is.

I think that everyone knows the basics about SIM. It's a token created on Hive Engine and we can trade it in HE ecosystem. We can use it to pay for in-game cards and send it to friends.
So the first use of SIM is to pay in game @dcitygame for various things. Market is the best example, when we bought some buildings for example SWAP.HIVE because it was cheaper but we need workers we can buy them with SIM token. Simple as counting to three!

The second SIM function is voting. Few people who haven't been in dCity long enough to know its mechanics probably don't know that with SIM Power we can vote on many things that happen in the life of our decentralized city. But before we talk about voting, let me tell you a bit about SIM Power. SIM Power is nothing but the average of our SIM holdings over a period of 30 days. To understand this scheme I will use an example. If we want to have 100 000 SIM Power, we have to hold it for these 30 days so that the average of these 30 days is ideally 100 000. We will not get such SIM Power by buying a SIM and on the second day hoping that it will increase by the amount we bought. It is a mechanism that forces us to be consistent. If we want to have a big voice in society, we need to hold the SIM and dispose of it responsibly. As an aside, I would add that by having a minimum of 8000 SIM Power we are entitled to receive HIVE every day. This is an added benefit of having SIM on your wallet!

OK, but let's get back to voting. With SIM Power we can elect a President, we will do this in the City tab and then Government. The president can then influence taxes and decide what to raise and what to remove or reduce. For example, he can decide to turn on the Education tax, in which case 5% of our SIM revenue is taken but we get a boost to our Education points of 10%. In addition to the elections we can use our SIM Power for Lobbying. There are 4 choices available, reduce income tax, change ranking rewards, increase War tax and increase HIVE rewards for holding SIMs. During this vote we must use 100% of our SIM Power, i.e. we can vote to reduce tax for 60% of SIMs and to increase War tax for the remaining SIMs. In this situation we need to enter 60 and 40 in the appropriate fields and click Save. The last method of voting is to distribute HIVE between the 5 previously mentioned rankings. We can choose between Income, Population, Popularity, Education and Creativity. The principle is the same, the sum of votes must be 100 and the cost of such a vote is 1 SIM.

The next important function we can do with SIM is to add our tokens to the SWAP.HIVE:SIM liquidity pool. This is the type of pool you may know from popular DeFi projects. We add our SIM and SWAP.HIVE and we are entitled to receive rewards for being a shareholder in the pool. I write more about it in dedicated post. You can add liquidity on the game page in the Swap tab. It's worth mentioning that SIMs placed in the pool count towards your SIM Power!

This is a brief overview of what you can use your SIM for. As you can see it is not an empty token that works on Hive Engine but a real tool for voting or trading.

This is the end of today's guide to the game dCity, I hope you have learned new things about SIM. Don't forget to keep an eye on this series because next week I'll be covering more game mechanics, including Events and Crisis. See you there!

If this article has interested you in any way, please leave an upvote or comment, thank you.

Thank you and until the next time, Nervi.