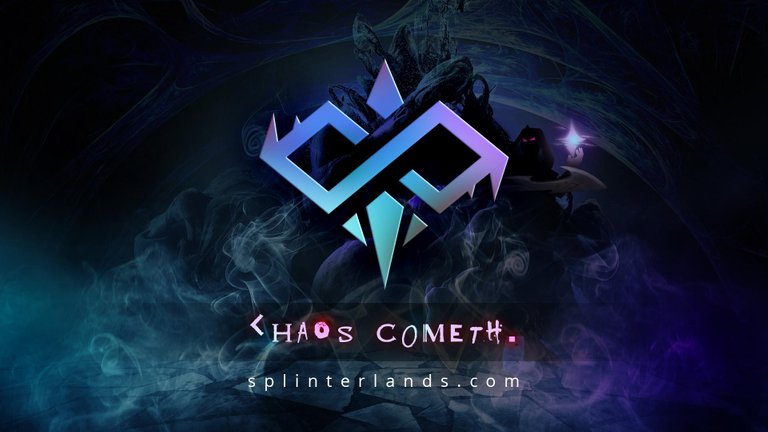 The Splinterlands FOMO is going to hit hard this month.

If you haven't already you can get an account here:
Splinterlands

For anybody who is paying attention to @splinterlands their growth has been nothing short of phenomenal. Thousands of new users daily and not only the top rated game on dappradar.com but the most active app across all blockchains overtaking pancakeswap just today.

They are single handedly bringing mass adoption to the hive blockchain and opening it up to a range of new users. 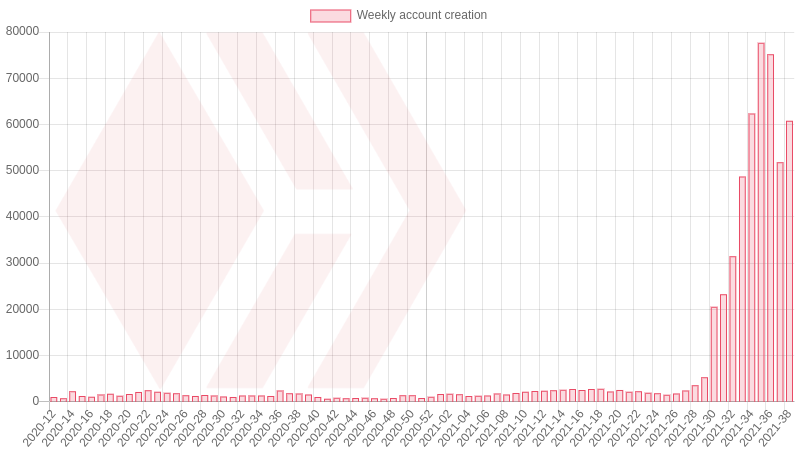 57,969 Users in the past week alone. 48,699 the week before. Those are not small numbers in the blockchain world and overtaking pancakeswap is a huge achievement. I know that there are bots in the mix but I'm also seeing new users posting to splintertalk and in discord so there is interest there from the gaming community.

Growing week on week with new cards, players, excitement there is a lot to look forward to.
A lot of different factors have led to this recent surge in growth but a combination of media coverage for #playtoearn games. SPS dropping at the same time with Yield guild striking up a partnership with the game.
Add to this the new rental market allowing players to jump in at any level or the shortage of cards since untamed ran out.

It's all of this and more.

Maybe luck, maybe skill or maybe just right place, right time but whatever it was Splinterlands is on the cusp of something bigger than we could have imagined.

So many people have jumped in looking enviously at the existing player base sitting on cards that are out of reach for the average user.

This week has brought it all into the light and now people can start makings plans for the new chaos legion cards.

Looking at the latest announcement post from the @splinterlands team we can see how it is all going to play out.

You can read the official update here, Splinterlands chaos legion.

They have given us a lot to think about but the main points are:

The math is very simple. There is nowhere near enough vouchers for the demand that is going to be there. It's very simple math.

Now a lot of smaller users will earn partial vouchers which can be traded on the market but we have no idea yet where the price will land on that one.

I think that the @splinterlands team put it best,

The point is to incentive the behavior that we want our community to engage in: stake SPS tokens for a long time. This system essentially tokenizes the exact highest and best action the community can engage in, and going forward VOUCHERS will play a crucial element in sales, promotions, and rewards in the game.

So how is it all going to work out for the users?

At the moment there are just over 100M SPS staked in the system.

I currently have 25k SPS staked in the system. This would entitle me to a grand total of 8.3 SPS per day.

Now i want to buy 2k packs in the presale if it works out and as this stands i will only be able to get 250 vouchers organically. This number will move slightly as more SPs get staked, minted ect...

But it gives a rough idea of where the account stands. An account with 2M collection power which is not that small, not that big.

That makes SPS a very valuable commodity to me and also to all of the players who feel that they have missed out to date and want in on the action. I know that they can wait until after the presale and it becomes a free for all but it wont have the same effect. You won't get all of the bonuses and you won't be part of the next wave of "lucky" early adopters.

That's part one. Part two is also in the announcement post.

Chaos Legion packs will be priced at $4.00 USD each during the presale, and will be able to be purchased using Credits, DEC, or SPS, and there will be a 10% discount for any presale pack purchases made using the Splintershards (SPS) token.

10% discount is nothing to be sniffed at and when players are ready to make the buy it makes sense to trade for SPS from other crypto's and jump straight in for 40c off every pack. If they are buying in bulk they will get 10% in extra packs and suddenly you are getting a very good deal on the new cards.

Looking at the movement from the past month we can see where the announcement hit the market and how things have been moving since. 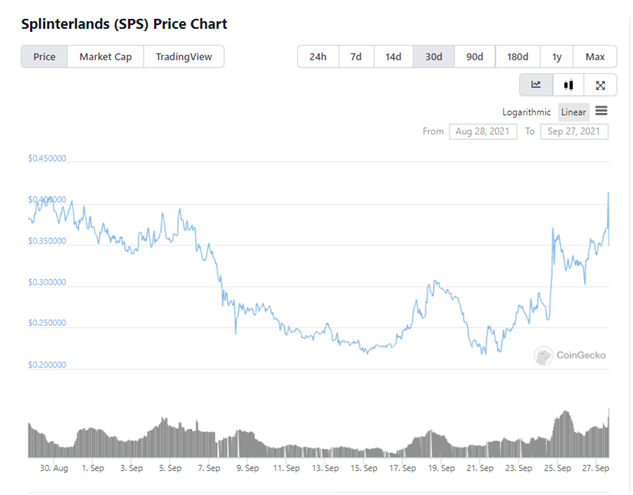 Nice steady increases with a slight pull back but very positive movement. We still have a long way to go until the end of the presale at November 17th and I can see the FOMO kicking in very hard over the next month.

As more posts and hype come out in October we will see more movement. When the vouchers hit the open market we will see where the price lands and if SPS starts making some good gains we will see people buying it for a profit and 10% discount on the new packs. Smart money is already buying up supply before the rest of the investors make the same decision.

It makes the most sense and i can see it heading towards a dollar at least before the end of the presale as existing holders stake as much as possible to get the free vouchers too. A lot of factors point to supply drying up at the same time that demand shoots up. That is a sure fire way to see price increases.

It should be very interesting over the next month or so.