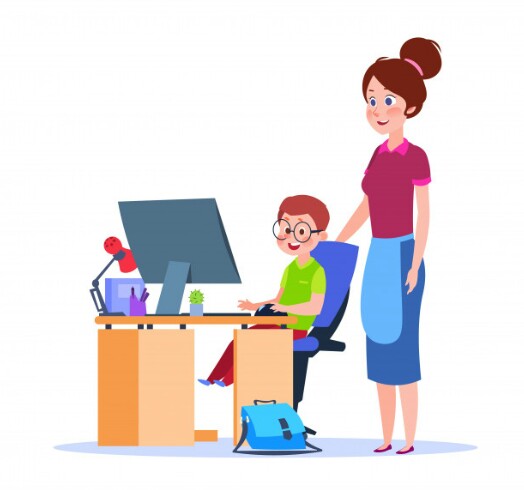 My son is quite a considerate boy, he loves to help me when he feels I'm too busy but the problem is that he takes his collaboration very seriously, to the point of taking away my concentration at the moment I need to give free rein to creativity to monetize content on Hive, but it's not really something that bothers me, I just adapt to his need for attention and try to channel it so that his curiosity is transformed into something that favors both of us.

His curiosity is as immense as a skyscraper so when he asked me Mommy, what is monetizing; I thought, it seems like a good time to explain to him about what I do in the Hive social network, so it's an interesting opportunity to talk to him about content monetization. For him as a child his concept of work is related to go to a physical place (an office for example), stay there 8 hours sitting at a desk, go back home and repeat the action the next day, every day of the year, to at the end of the month get paid for doing this task.

With the arrival of the pandemic my services in the company where I worked ceased until further notice, while my presence and that of my son became permanent at home since the classes at school ceased to be face-to-face to move to a virtual plane, therefore having excess of time (and ideas) discovering the social network Hive, especially Leofinance and Proof of Brain, meant for me an important source of income through the monetization of content. In this sense, I take the process of creating articles very seriously, as if it were my job, so the times my son shouted MOMMYYYYY to request my presence for something trivial I answered him: son, I can't attend you now, I'm monetizing; when I tell him words that he doesn't know he feels I'm doing something important, therefore, he does his best not to bother (rather he tries not to) and watches that others don't try to take me out of my creativity zone (including family, friends and my boyfriend).

Every time he answered the phone or a neighbor knocked on the door of the house, the child's answer was always the same: Mommy is busy, she is monetizing, when I asked him what that was he would simply say "I don't know, but for mommy it's important" and immediately cut the communication or close the door. When he asked me the question at the beginning of the article I decided to explain. In my mind I was thinking of that Nigerian kid who managed to buy a smartphone with his earnings on Leofinances, or the girl who bought a blender with her earnings on POB, so I opted to offer him an explanation according to his age and level of understanding because if they are capable of creating content on Youtube, Instagram or TikTok maybe in the future when he is a little older, he will opt for this space as a means to generate income, however, I have to admit that for kids now that writing is boring for them, as if it were a school assignment.

I told him: love, monetizing content is like that homework where you got the best grade in the classroom, remember how proud you felt, it is very similar because writing a story on the internet to share it with the world deserves the same process you did with that school work you feel so proud of, but you have to treat it with the same respect and affection you show with your responsibilities because my dear, with time you will realize that when you do things right the world will reward you. Something like that is what I do on the internet, but unlike you mommy doesn't get a good grade but a reward in money, which I use to make our lives better than ever besides spending more time together.

My little boy went to sleep thinking about what I explained to him, the next day he took his notebook, sat down next to me and said, 'mommy, don't take my concentration off me I am also monetizing like you'. I think we will have a future member in the Hive Blog ecosystem soon, maybe sooner than I think.