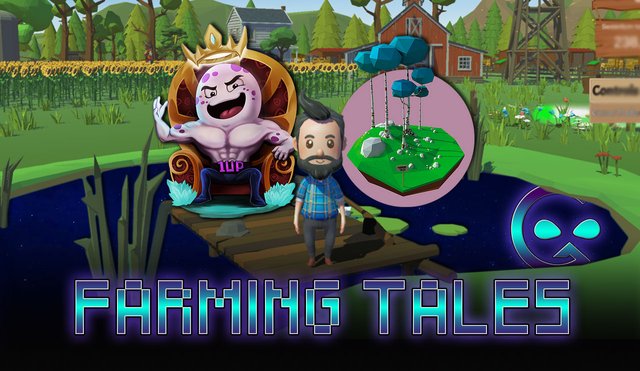 Farming Tales is an innovative low-poly farming simulator built on the WAX blockchain. Aspiring farmers are tasked with growing and improving their farm through the acquisition of animals, buildings, and additional land. Through various combinations of these assets, players can earn SEST, one of Farming Tales' two native tokens, representing the goods they've "harvested".

Farming Tales differentiates itself from other farming simulators in the crypto gaming space by using the Unity graphics engine to provide a 3D experience in contrast to the simpler, minimalistic 2D graphics of its peers.

Also radically unique to Farming Tales is the mechanism of having NFT assets tied to real products produced by real farms through Project $SEST. While gameplay is based in the digital New Waxchester County, the proceeds of their digital farms will have the knock-on effect of driving value to real-world products such as honey, hemp and saffron. This distinction will allow players interested in receiving such goods to enjoy the physically tangible benefits of Farming Tales' play2earn mechanics.

Thanks to its presence on the WAX ecosystem, Farming Tales has wasted no time in networking with fellow WAX projects such as the TACO app and Moon Stones Collection. These collaborations have resulted in the addition of a Tacos Stand building capable of generating TACO tokens and two Moon Stones Boosters, the Forager and the Farmer, that provide productivity bonuses.

The Story So Far

Despite having only recently launched early in the summer of 2021, Farming Tales has already transitioned from an Alpha to Beta state as of the end of 2021. During this time, Honey and Saffron land sales have been completed (and implemented) while the real-world farm has progressed through the soil prep and customized bee hive construction stages.

It is now possible to interact with your farm on mobile devices and place various buildings on your land, although some structures have been given placeholder functionality until they are more fully integrated with unreleased game systems slated for introduction later this year. Thankfully, players can begin harvesting SEST from their farm for several staking uses such as earning CBIT, Farming Tales' other native token, intended for purchasing the food/water necessary for farm activities.

Although Farming Tales is a young game, its community has grown rapidly in just a few months: 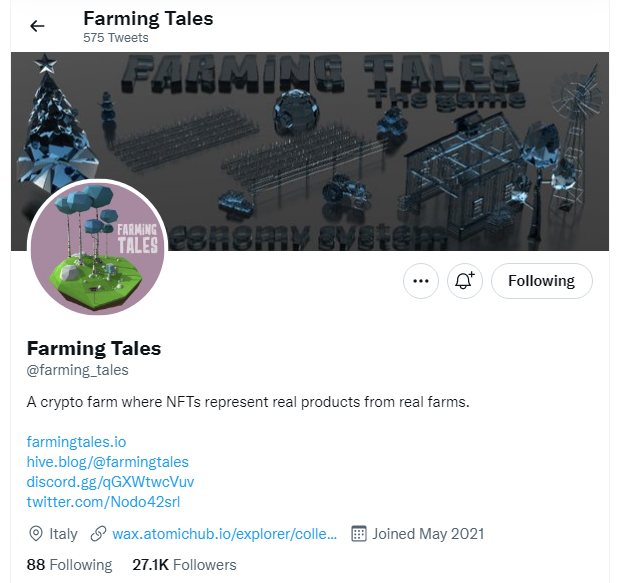 Their Twitter profile recently surpassed 27,000 followers, and the official Discord shows more than 10,000 members are ready to adopt the farming lifestyle: 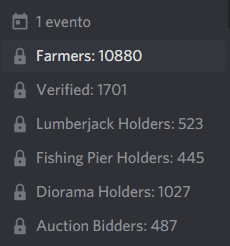 SEST is the primary token used for buying/selling animals, plants and buildings or improving assets in New Waxchester. SEST has a fixed supply of 100,000,000,000 Sestertii that is regularly dispersed and returned through in-game earnings, activities and purchases. It can be staked for passive CBIT earnings based on the amount a player stakes releative to the entire pool of staked SEST.

Staking is done through the in-game 'Wallet' link, and your SEST will be locked down until you begin unstaking. This process takes 7 days with 1/7th of the amount unstaked being returned to you each day.

In the future, SEST will also be used to purchase real products from the real farm. 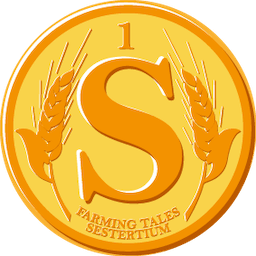 CBIT is a utility token intended for the purchasing of commodities such as food and water. These commodities are necessary for feeding animals and watering crops, and the daily creation of CBIT is based on the amount necessary to feed/water all staked animals/plants each day. Other such commodities include gasoline, which is required for interacting with New Waxchester.

Once you've staked SEST, you'll begin to receive CBIT from airdrops that occur twice a day at 00:00 UTC and 12:00 UTC. Secondary airdrop calls are made at 06:00 UTC and 18:00 UTC as backups for any issues that may occur during the two primary airdrop times.

Each of the following NFT types come in one of three rarities: Common, Rare and Epic. An NFT's rarity determines its resource output, harvest cycle duration and/or staking slots. For example, a Common Stable has only one slot available for a single Animal NFT while an Epic Stable can accommodate up to three Animal NFT's at once.

Animals must be staked into various Building NFT's in order to generate produce that can be harvested for SEST. The six animals currently available are: Cows, Geese, Goats, Hens, Pigs and Sheep.

Buildings provide a location for staking Animal NFT's, generating special "legendary" resources (Wood/Fish/Honey), or storing commodities (Water/Food). These NFT's can be crafted through the Marketplace found on each player's farm.

Storage Buildings are currently limited to the Water Tower (Water) and Silo (Food) and have a set amount they can store before needing to be refilled by spending CBIT.

These self-generating buildings are special in that they have a rarity of legendary, and players can only possess one of each building. The resources they produce can only be obtained by purchasing them from the players that own them.

Boosters currently only include two Moon Stone Collection characters (Forager and Farmer) and various iterations of Frank, but eventually players will have access to numerous characters that can be staked into buildings (1 each) to increase their overall performance.

All future characters will be created through collaborations with other crypto projects.

Recently, Farming Tales announced that development towards releasing New Waxchester has begun with progress towards releasing the vegetable gardening system. In that same announcement, Wildflowers were introduced as something new players can use to acquire small, daily amounts of CBIT to maintain their farms. Each player is limited to 1 Wildflower which will not need to be watered. Also, 3D animals are well under way, and its expected they'll make an appearance on farms, soon. Similarly, the watering cost for gardens has been reduced in preparation for the release of the seed system.

The real farm has begun the saffron redemption process for real saffron with orders being accepted until Jan. 23rd, this coming Sunday. Shipments will follow shortly thereafter while Honey Season is on deck and the start of Hemp Season is currently awaiting confirmation.

Lastly, the sale of Animal NFT blending vouchers has begun! Vouchers are available for purchase through NeftyBlocks. Once you have obtained the required vouchers and NFT's, you can initiate the blending process as outlined below:

To assist the Cartel with investing in Farming Tales, @libertycrypto27 has begun mathing out optimal paths for ensuring top ROI. At the time of writing this:

Because Farming Tales has two tokens (SEST and CBIT), buying cards has greater nuance due to the complex interaction between the two tokens. @libertycrypto27 created the following table to guide future investments on Farming Tales that calculates Daily ROI and the BREAK-EVEN POINT (IN DAYS) relative to the purchase of the different combinations of Farming Tales cards.

Since Harlequin Cow allows a harvest every 3 hours and 20 minutes, the estimated daily gain is 1.30 WAX which corresponds to a daily ROI on the initial investment of +0.734% if we allow for 8hrs of sleep each day.

This sets our BREAK-EVEN POINT at 243 days.

Currently, @libertycrypto27 has 1 Common Stable and 1 Epic Harlequin Cow. This allows him perform a Harvest operation every 3 hours and 20 minutes for 15 SEST tokens or 75-90 daily SEST. 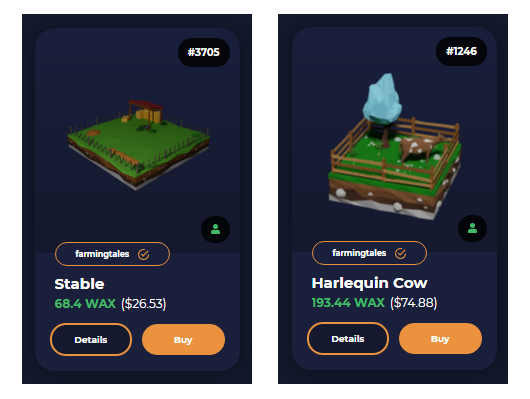 Due to the dual nature of Farming Tales, the development team has provided two road maps that actively track the game and real farm separately on the official discord: 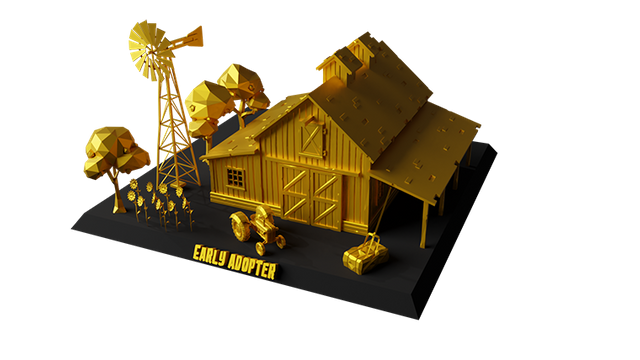 Before you can begin playing Farming Tales, you'll need to obtain a WAX Cloud Wallet. Once you're ready to hold assets, head over to AtomicHub to purchase your first Farming Tales NFT's. Farming Tales is not a free to play game, and you'll need one of the farming NFT combos in order to start earning in-game rewards:

Alternatively, the following NFT's can be purchased on their own to begin harvesting resources:

If you'd like to acquire SEST for staking or in-game activities, Alcor is currently the only exchange where you can purchase SEST or CBIT directly with WAX. There is even an option for swapping SEST and CBIT.

Further, Animal NFT's need food obtained in-game near your Silo/Water Tower. You can buy food and water to refill either structure when they run out for 5 CBIT tokens. New farms begin with a full Common Silo and Water for free, but it's possible to buy Rare and Epic versions with cheaper refill costs per commodity: 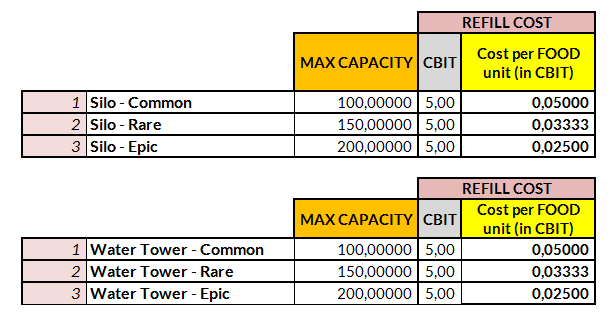 This means you can significantly reduce your operational costs by increasing the rarity of both your livestock and your storage structures.

Getting Your Feet Wet

Once you're happy with the NFT's you've collected, you'll find yourself looking at a similar starting area when you dive into the game:

You can move around the game by using your mouse and keyboard, and certain areas of the game are marked with a colored circle if they allow you to perform actions. To perform these actions, step inside the white and green circle and press 'E' on your keyboard.

(Pressing 'E' again allows you to exit the action area.) 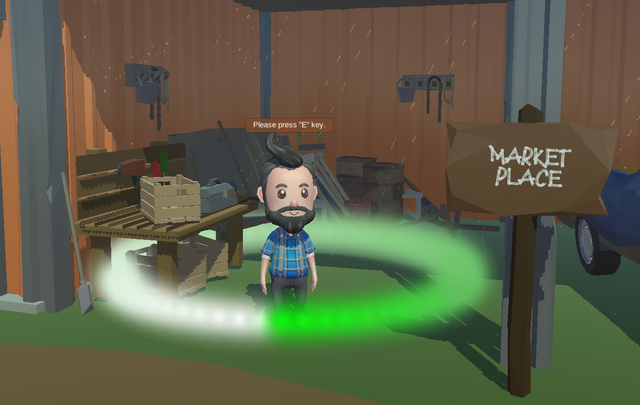 The most important action of the game is found in the Build And Harvest area where pressing the 'E' key on your keyboard shifts your perspective to a 2D top-down view of your farm: 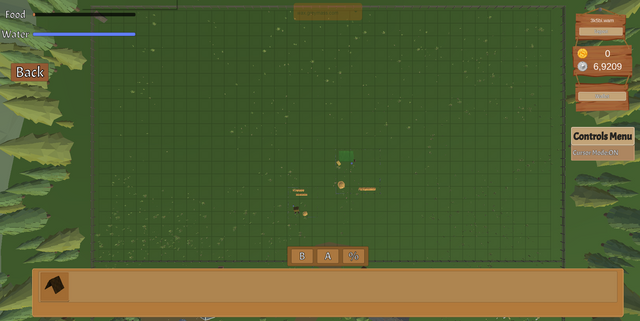 From this view, players can:

Harvests do not accumuluate, so you'll need to actively collect your resources in order to start new harvesting cycles. Thankfully, animals do not die, as they only need food (water for plants) when starting a new harvest cycle. If you run out of food, you'll simply need to acquire more before you can resuming harvesting.

Once released, New Waxchester will serve as the central town for farmers in the Farming Tales world. Its buildings will be owned by players that "win" them via crafting systems after certain sales. Players will also have the option of selling their resources in New Waxchester shops or upgrade them into better quality versions with higher selling prices. Shop owners can set taxes on materials depending on the building type.

The first buildings released with New Waxchester will have joint-ownership assigned to players based on their staked SEST. At the beginning of each month, a "staking window" will begin that lets farmers stake SEST into the buildings they want partial ownership of. This ownership lasts for the next month while new stakes are established in other buildings for a monthly ownership update. At the end of each month, building owners will receive fees relative to the stake they had in each building.

To learn more about Farming Tales, check out their official Whitepaper and Discord FAQ or head on over to one of their social media platforms:

Farming is Fun, but It Can Be a Risky Business 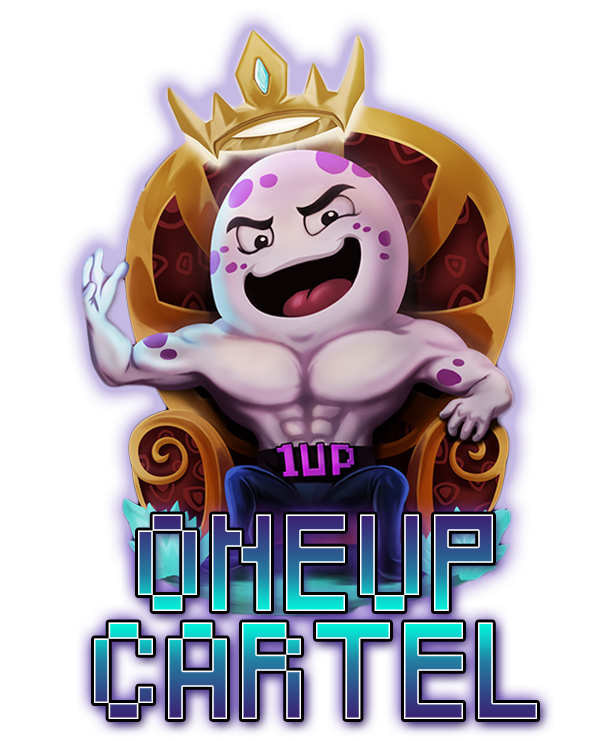 We hope this introduction has given you a general idea of what farming life in Farming Tales will entail. The game offers an interesting concept filled with intriguing potential, but there are risk factors to consider before choosing to invest.

The Cartel will invest into a farm based on the suggestions of @libertycrypto27 and begin its adventure into Farming Tales.

In the meantime: Game On!