In a sane world, nobody would care what the FED's Chairman Jerome Powell says

Earlier yesterday I made a post talking about how we should expect either a Pump or a Dump after the Federal Open Market Committee meeting (FOMC) announcement is made. My expectations before the FOMC meeting outcome announcement was made was 50bps meaning the FED or Federal Reserve Board will hike the interest rate in the United States by 0.5% and when it happens I would be expecting a MEGA PUMP, then if they hike it by 75bps meaning 0.75% I would be BULLISH first then BEARISH later and that is exactly what happened in the market yesterday, the market was first BULLISH for a little while after the FOMC meeting announcement by the FED's Chairman before it crashed, my last expectation was 100bps+ meaning they hike the interest rate by 1% or more wish will be a fully blown BEARISH move. 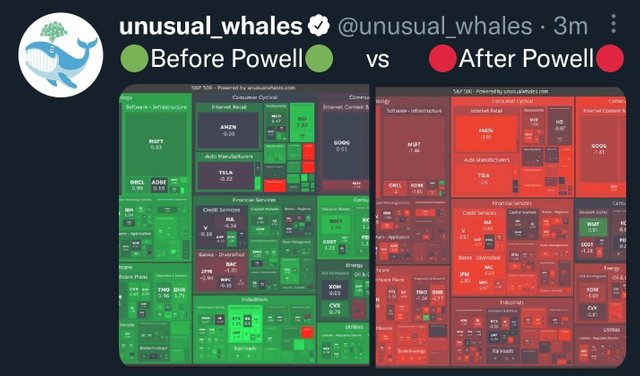 The FOMC Meeting Effect On The Crypto And Stock Market

My post title was gotten from Twitter and I could relate to it because it is the truth in a sane world nobody would really care what the FED chairman Jerome Powell says but that is not the case and our reality so far, most people all around the world both crypto traders and non-traders are reacting to the FED raising interest rates by 75 bps or 0.75% at the FOMC meeting as expected.

Yeah, there are a lot of people who are already panic selling as usual while some are taking advantage of how people are reacting to the FED's announcement, as people are panic selling they are stacking up. Some crypto influencers did not help matters instead a lot of these influencers scared people about what the FOMC meeting outcome was going to be. That's why most people looked forward to what the FED chairman was going to say and reacted accordingly but I can not blame the crypto influencers, because everyone is entitled to their own opinion, and how they react to the news is not their fault. Although their reaction is hurting the crypto market.

Bitcoins price due to people's reaction has directly or indirectly been impacted by the decisions of the Federal Reserve we have seen this happen time and time again, no one can control how people will react to news and how much it will impact the crypto market but that impact would not last forever, Ever since Bitcoin became mainstream it has been affected by macro factors like interest rate hikes due to how people react to them as I have clearly stated. But that doesn't change Bitcoin's role as an Inflation hedge and store of value long-term, also Bitcoin still remains an amazing base layer for facilitating billions of transactions daily. Bitcoin and Crypto (Altcoins) works and are here to stay.