Honestly, before the #LeoThreads feature was launched two days ago I didn't know what to expect but since it was coming from the leofinance team I knew it will not disappoint and it would be something great, trust me it has been mega successful since its launch and might have exceeded most peoples idea of what microblogging should be like, also I love the love and energy been put in from everyone in the leofinance community and on Hive in general because #leoThreads is not restricted to only we lions (those in the leofinance community) but it is for everyone on Hive and we welcome new users who want to have a taste of what #LeoThreads feels like (Note: #LeoThreads is addictive). 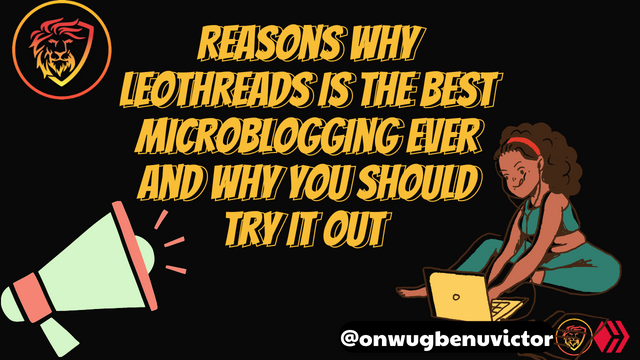 Before I continue with my post if you don't have a hive or leofinance.io account it would be advisable you create one now, to be able to access the #LeoThreads feature, if you have an account already on Hive great just sign in your account through the leofinance.io frontend and click on threads but to make everything easier for you just click on this link it will take you directly to LeoThreads and you are good to go.

Why You Should Try Out The Twitter Killer LeoThreads Microblogging?

#LeoThreads is so fun and easy that anyone can do it, because it is user-friendly.

A new way to interact simply, and fast without the need to create a lot of content.

Congratulations @onwugbenuvictor! You have completed the following achievement on the Hive blockchain and have been rewarded with new badge(s):

Whoever invented this community is a genius, always bring up better ideas each time I come across.
Thanks for the quick link, I’ve been procrastinating checking it out but it has finally caught up with me.

You are welcome, I hope you enjoy your LeoThread experience.