Celebrities and Crypto: A Recipe for Disaster 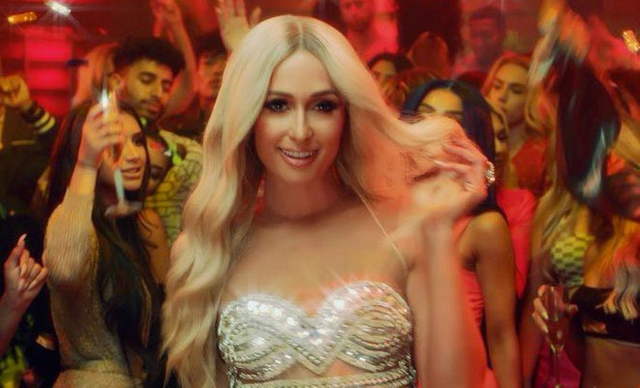 When we spot them discussing Bitcoin, we have to be more skeptical and consider their motives. History has proven that celebrities will always advertise Cryptocurrencies right at the top of a bubble, possibly as part of a paid promotion to influence their fan base in a financial decision.
There is always self-interest involved. The price of the asset they present may temporarily rise depending on many variables, but eventually, anyone invested in a cryptocurrency following a celebrity tweet will most probably enter in this investment at a bad time.

Leo Messi becomes a brand ambassador for Sirin Labs in December 2017. Sirin Labs was developing what it called a “blockchain phone”. The name of the mobile device was Finney, it was released in 2018 and was a complete failure. 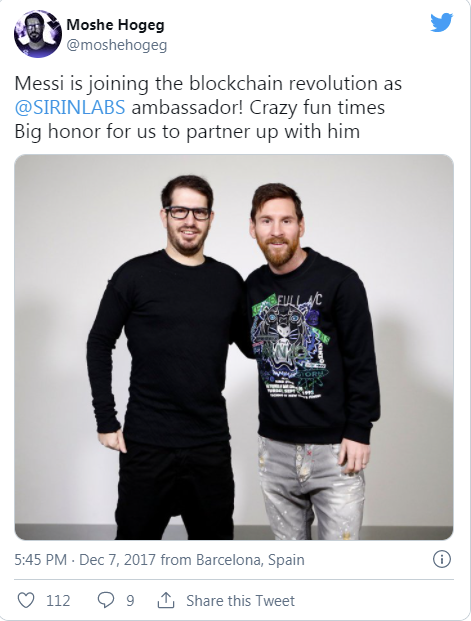 Messi signed a contract with the cryptocurrency project Sirin Labs to promote it for months. He appeared to be endorsing this company with many tweets and Sirin Labs became very popular.
$SRN was a token issued by Sirin Labs that probably wasn’t required at all. But everything was about this token. The creation of a phone by the name Finney that was supposedly high tech, powered by blockchain technology, at a low price, and having a hardware wallet available. It never really took off as the phone was just a show. 10,000 phones were made and the company quickly disappeared after that.

The real profit for the Sirin team, came right at the top of the bull run of 2017, with a market dump of team-held SRN tokens that followed for months.

If you invested in the Sirin Labs ICO, technically you lost all your money.
ROI is 98,25%, three and a half years later. Messi did a great job in temporarily “pumping” the price of this asset and increased its popularity so much to help the team behind Sirin make millions.
All, at the expense of Messi’s followers who trusted his endorsement and support for a project that was meeting a lot of distrust by the Crypto community.
Messi was onboarded as a “Sirin evangelist” during the ICO. The altcoin season of 2018 was just about to begin and Sirin’s ICO price was pegged to ETH with 1SRN equaling to 0.001 ETH.
Ethereum during December 2017, had an average price of $700.
The ICO price in a very rough estimate was: $0.70. During the altcoin season of 2018 (next month), it peaked at $3.80.
Messi kept advertising Sirin Labs for months, at least until March 2018 when SRN price had already dived to prices lower than ICO.
Currently, the price of SRN is $0.013. 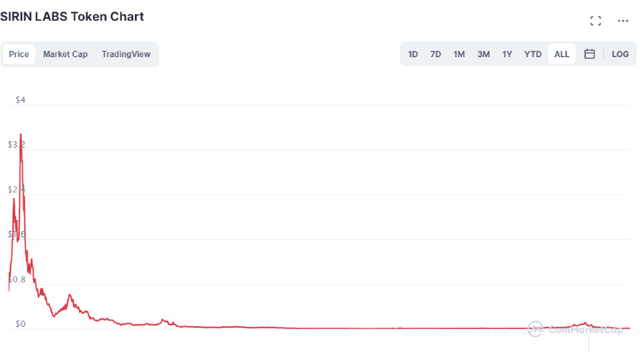 Newcomers in the Crypto field probably never heard of Sirin Labs, even though this Cryptocurrency project found support from one of the top celebrities, Lionel Messi. 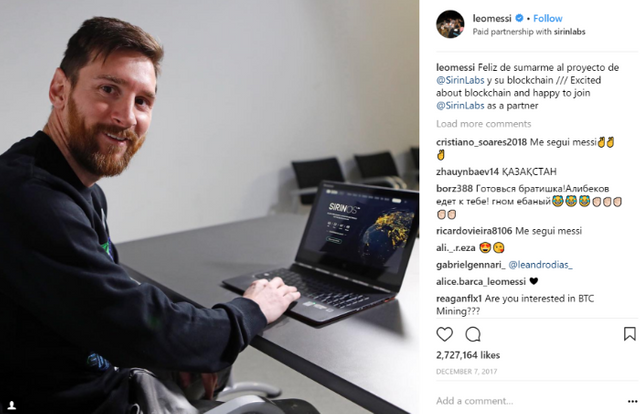 Moshe Hogeg (Sirin Labs CEO) was sued last year for unpaid bills of his company, Sirin Labs.(Source). The whole Finney phone scheme was a scam all along and sadly it used the name of one of the earliest visionaries in Bitcoin, Hal Finney, to gain more popularity.
Sirin Labs reportedly raised $158 million from its ICO ( source), however as with almost all ICOs in 2016–2018, there were a lot of irregularities and quite often the ICO proceedings were a lot lower than the official announcements.

Professional boxer, Floyd Mayweather, appeared at the “cringe” Bitcoin Miami 2021 convention. However, Floyd Mayweather hasn’t just found Crypto in 2021. In 2018, he was part of the promotion of a scam cryptocurrency project called Centra. 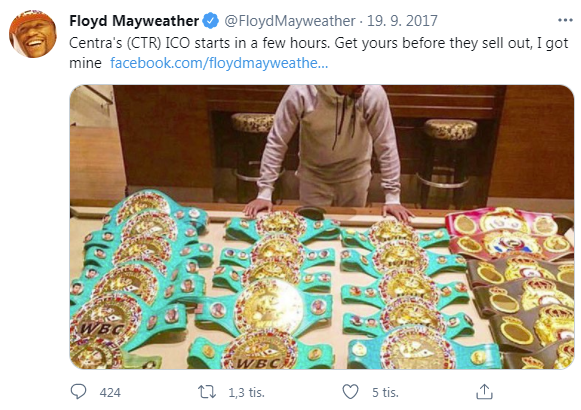 Fans of Floyd Mayweather and DJ Khaleed that followed this financial advice, lost all their money.
Centra was a scam. Literally, not just in the sense that its price went down a lot. Centra’s ROI is -100%.
It was a clear scam-ICO and Floyd Mayweather together with DJ Khaled are currently accused of security fraud by the SEC and awaiting trial. The founders of Centra have already pleaded guilty of defrauding $25 million from their investors (Source)

The trial for this case was postponed in 2020 due to Covid and the lockdowns.
At the Bitcoin Miami 2021 convention, probably nobody cared/knew, however, BTC maxis only boo’ed Floyd when he discussed personal plans to create another cryptocurrency that will reach billions in market cap and challenge BTC. He also promoted his own NFT and asked the audience to buy it. (Source).
Floyd Mayweather also endorsed another possible scam crypto, Ethereum Max. At the Bitcoin Miami conference, he was wearing a T-Shirt of the token which supposedly is to be used to buy tickets for an upcoming boxing match. This is an interesting case. Kim Kardashian has more than two hundred million Instagram followers. I doubt that any of them ever cared to learn how to invest or use cryptocurrencies, however it is very dangerous for those that will follow this financial endorsement.
Ethereum MAX is an ERC20 token that is considered a scam by many in the crypto community. (source)
There was even speculation about her Instagram account getting hacked and posting words of support for this token. 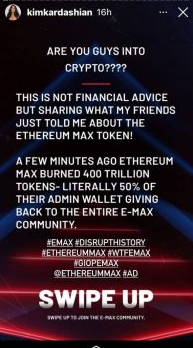 It doesn’t look good and only time will tell, nevertheless, this is clear financial advice. The message is not written by Kim Kardashian but possibly by someone managing her account. Since there won’t be any implications for her image it doesn’t matter if a few thousand of her followers lose some of their funds investing in a shady cryptocurrency. Probably this is how the person managing her account is thinking it. 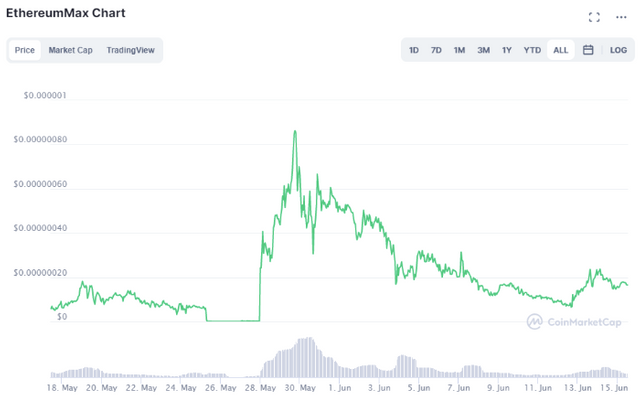 This is the chart of this token, not making any sense at all, except perhaps providing clear evidence of price manipulation and huge pump by hype and dump of tokens held by the team. (total supply: 2 quadrillion tokens).
Ethereum Max is a Uniswap ERC20 token that is not advisable to invest or trade since its tokenomics and background seem to be extremely shady. 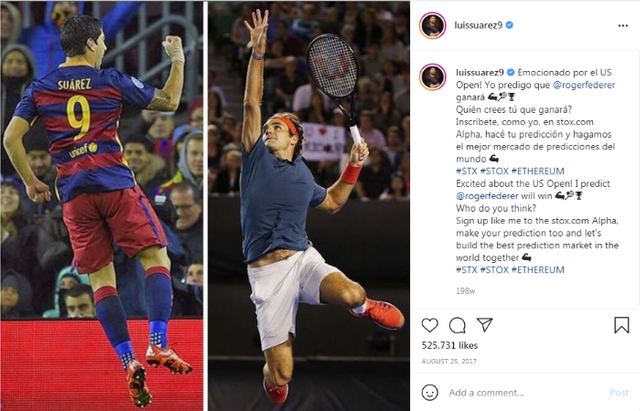 Luiz Suarez advertised the STOX predictions market in 2018 and supported the STOX token on Instagram. The STOX team announced in 2018 that the ICO attracted nearly $30 million.
Everyone invested in STOX lost all their money:

I tested the STOX platform in 2018 and found it a waste of time. It looked like a scam, and its prediction market was bugged, giving many errors in final scores, paying for predictions on matches that had already ended, and of course, I didn’t manage to withdraw. I didn’t deposit either, but I was given tokens to test this platform, tokens supposed to be withdrawable. 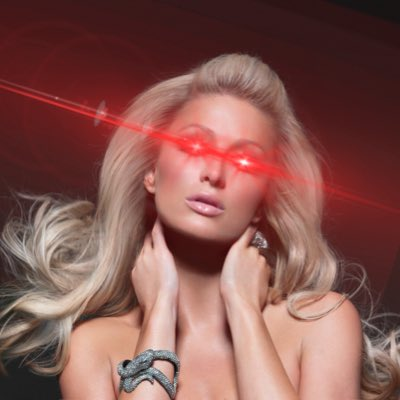 I’m surprised by the greed of celebrities and their managers. How can a popular individual accept funds to promote a product or company without first performing due diligence?
There is almost no celebrity interested in Cryptocurrencies when the market is bearish, they only appear very close to the top and their social media posts intensify right before massive selling begins.
Way more celebrities appeared during this bull run to support BTC or other cryptocurrencies and increase the hype. From John Lennon’s son to the usual suspect Edward Snowden, they shilled BTC, after first increasing their position on the asset.
Even forgotten celebrity Paris Hilton decided to assit with the hype and shilled BTC very close to the recent top. Although she is probably looking for an NFT cash-grab before the mania phase evaporates.

Celebrities in crypto is a counter indicator and this won’t change for a while. They are paid or have personal interests to advertise and promote cryptocurrencies. There is no interest in the technology or the long-term potential of an investment. You will not read from them when the market is “down”.
There is nothing honest when top celebrities influence their fan base and promoting shady investing plans.
Celebrities are the perfect tool for marketing since their followers are idolizing them and trying to mimic their actions and habits. However, this is a very dishonest approach by most and could seriously harm their image.
When people take financial advice from a rapper, a boxer, or a footballer, then they had it coming and probably didn’t deserve this extra money in their pockets.
But more importantly, when a top pioneer and entrepreneur is responsible for pump and dumps, then it becomes a whole different story of recklessness and irresponsibility.

Writing on the following networks: