Should Coinmarketcap add new Category of Coins/Tokens for Social?

Coinmarketcap is a great website. Ok so some people hate it but I love it. It's for sure one of my daily go-to pages. Over the last while, there have been a number of welcome improvements. Such as the filter for Defi and now the new filter for Storage. Which got me thinking. Why is there not a filter for Social? After all the next generation of social media has the ability to disrupt how social media works today 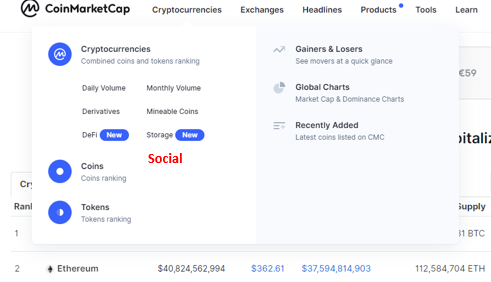 The idea of changing how social works as been around the block(pardon the pun) a little. I think most people in the space agree the centralized social is not the best solution. There are many problems with the current online social platforms.

Right now, if you make a post on Facebook, they decided who they show it too. While people that view your content are tracked and their data collected. This data is then used so Facebook can feed the consumer with more of what Facebook wants them to see. This would be the content that obviously drives the most revenue or hits some sort of KPI. The problem with this is the small content creator, working their asses off for a little attention, is being used by the big boys to collect data and generate revenue. And the small content creator has to go along with these rules because they need the traffic.

Talking about Facebook, do you remember the days when community owners were able to contact their community members. A massive lesson was learned by creators and community owners at the time of this change on the importance of collecting and owning your email list.

Recently I was speaking with a popular blogger and Youtuber. He told me that he removed Google ads from his site for a while and slowly watched all these pages go from top spots to unlisted. After reinstating the ads, the pages began to rise again. Now he doesn't want to upset Google anymore, because he needs the traffic to make a living. Playing by rules he does not like because his hands are tied.

Google+ Closed down and left community owners with no home, but lucky enough allowed them to take a back up of their data.

The Next generation of social, social on web3 aims to resolved many of these problems and revolutionize how social works. From privacy to tipping, storage, and payments. These blockchain-based solutions have the ability to disrupt how social works today. Hive is just one such example. Not only is it a decentralized platform where the content creator can earn, but it also offers free storage for bloggers.

And Hive is not the only one. Although unlike Hive some next-generation socials don't have their own coin or blockchain for that matter, But I would still make a case for identifying coins associated with next-generation social and listing them under a category of Social. The case being, there is an opportunity to disrupt and change how things on social media work. just like the way Defi and Storage could disrupt the industries they are in.

Off the top of my head, the platforms I would consider to include in this new tag on Coinmarketcap would include, but is not limited to,

What others would you suggest? Do you think coinmarketcap should include a new identifiable category for Social? leave a comment below and let me know your thoughts.

While doing a little research on this post I came across https://cryptoslate.com/cryptos/social/ . I have not looked at most of the listing but if coinmarketcap were to introduce such a tag, this could make a nice base point for review.