Splinterlands: Splinterland's Guilds and their importance in your gameplay and upcoming SPS rewards for Guild.

Splinterlands: Splinterland's Guilds and their importance in your gameplay and upcoming SPS rewards for Guild.

Guild is the Splinterland's in game feature where players form an alliance and work towards some common goals and they get some additional bonus in the game based on their Guild level.

In other words you can compare Guild as an "Alliance" between players where they are working together for common objective to reap some benefits in Game.

So if you see in top left of your game screen, you will see the option of "GUILDS" in the game. There are already so many existing Guilds in game that are displayed according to their rating.

So can anyone create the Splinterland's Guilds? 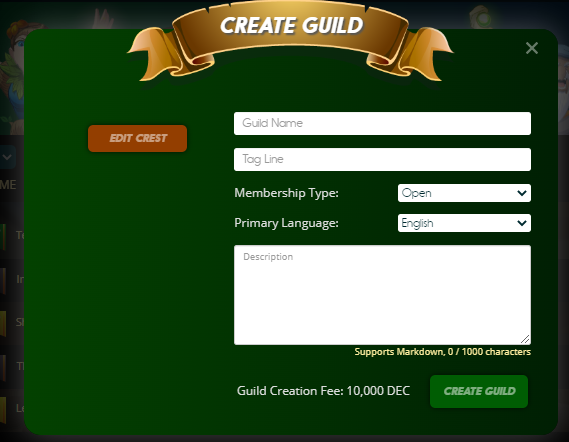 But creation of guild is not the end of it, and it creates just level 1 building and Guild level can be upgraded to level 10 and
and upgrading to each level require more amount of DEC then the previous level.

What are current benefits of Splinterland's Guilds.

Players get the guild benefits according to their guild level that are below:

Players get the bonus % on the ranked battles , If you are part of max level guild having level 10 Lodge then you will get staggering 20% on DEC rewards as well as focus rewards points.

20% bonus is really a good bonus

As a guild player , you can take part in brawls and brawl rewards will give "Merits" to the individual players and that Merits can be redeemed for Gladius pack and which give Gladiators that cannot be purchased in the market. Gladiators can be burned for DEC but will you?

Splinterverse (Splinterlands Metaverse) : A comprehensive ecosystem for everyone to earn.

Splinterland's : Explosive growth is yet to come.

Splinterlands : When luck strike twice in gap of few days.

Splinterlands : Do not ignore Guilds

Note for my affiliates

I saw few of the player joined the game using my affiliate link and then stopped playing after few battles. If you have any difficulty in playing game, do not hesitate and join the game discord. It is really helping community and contact me here or on discord, I will definitely review your game for your better game experience.

Brawl are over weighted.

Thanks for elaborating on the Building, I always contribute DEC to the Arena but don't know what it is for lol

Make sure bud that you take part in Brawls, there are 30 members in guild but fray are limited to 16 , so if Guild is full then all will not get chance on brawls.

Have some !LOL !CTP and !PGM

Congratulations @r1s2g3! You have completed the following achievement on the Hive blockchain and have been rewarded with new badge(s):

I haven't really contributed much DEC to my guild buildings but I do participate in brawls. I think the extra pack or two is a great thing to have even if you can't sell the cards for DEC

Do you have your own guild i can apply (even if I am new?)