Once A Bitcoin Critic, Now A Top Bitcoin Whale Maximalist

What Does Michael Saylor Know About Bitcoin That We Don’t

Michael Saylor was once a top bitcoin critic, I think in year 2013, he condemned bitcoin, now he is buying bitcoin like the way people bought tissue paper before the pandemic lockdown. He owns 0.67+% of the total bitcoin circulating supply. 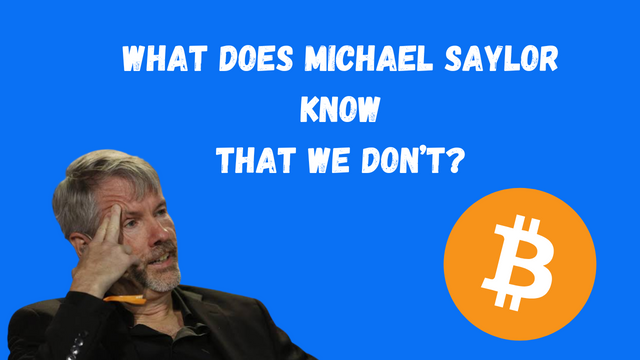 The story is getting more interesting, because Michael Saylor is really going hard to prove to these crypto critics that bitcoin is the future after being in their place 9 years ago. Michael Saylor has been publicly investing in bitcoin through his company, microstrategy, since 2020. He is one of bitcoins whales and one of Bitcoin’s public maximalist that believe that bitcoin is the alpha and the rest are probably thrash. Remember when he was suggesting that other cryptocurrencies gets regulated except Bitcoin because they are tarnishing Bitcoin’s credibility. Yeah his maximalist behavior towards bitcoin is that huge.

Even if he is a top bitcoin maximalist in the world it’s nice to see him go so hard for Bitcoin. He has invested $3.93 Billion on 129,699 Bitcoin, dollar cost averaging, didnt buy everything at once, but today makes it the first time they are buying the smallest bitcoin purchase of 480 Bitcoin which cost $10 Million. Well, it was expected knowing fully well that Microstrategy loves to buy the dip. Making your bitcoin holdings public ensures transparency but also invites a lot of crypto critics/Twitter fingers to always be in your business.

While some people praise him for always buying bitcoin, some people criticize him and feel he is risking too much. In my opinion, I feel people achieve great things by doing the impossible, or doing something that seems like a foolish idea to a regular person. We are currently seeing the critics pounce on him on Twitter today, because the price of bitcoin is low compared to the all time of $69k, observe this space and watch it in a year or 2 years when the price of bitcoin probably pumps above $100k. He will suddenly be called a genius and a visionary.

Having 129,699 Bitcoin at $100k price means that $3.98 Billion investment will give him $12.9699 Billion value. That is the risk Microstrategy is willing to take, investing on bitcoin because of its security. Honestly speaking, out of all the cryptocurrencies in the world, Bitcoin is the most decentralized and most secured crypto we have. Yeah it lacks certain things like scalability but some people prefer to invest their money based on quality, security and value.

Sometimes I see these big whales invest massively on bitcoin and I wish, that could have been Hive, that would go a long way on Hive, but then, it’s still slow progress for us, but we are definitely getting there. Though I don’t see the price of bitcoin going $10k or below $10k, but it’s still a huge risk.

There’s only one way M.Saylor is going to end and it’s either a genius or a bloody retard.

That’s the sad truth, time will only tell

Michael Saylor's insightful performance stems from his knowledge of what Bitcoin is as a project and as a technology. Knowing that before he was one of the biggest critics of Bitcoin and now he is one of its biggest defenders, shows us very well that Bitcoin has a great future ahead of it.

As for Hive, I also see a promising future ahead, because more and more of us are coming together to add value to this platform, crypto and project. The biggest difference between Bitcoin and Hive is, in my opinion, that they both play in different leagues, and I don't mean in terms of investment, but that Bitcoin is a revolution as a means of payment and investment, while Hive, as a platform, is a revolution and innovation in the field of social networks and the content creation.

However, when Hive begins to interest people much more (that is, when everyone begins to see it), we will see an exponential growth of Hive in all senses, and above all, because that is when the big investors ( the whales), they will begin to invest millions in the ecosystem. I believe that at that time, the price of Hive will reach levels never seen before, and those of us who are here today will be very rich for the simple fact of having been among the pioneers of the project.

This is a well detailed explanation of the possible future growth and development of Hive. Glad to see you are as optimistic as I am. Thanks a lot for stopping by.

Big things attract big people.
They just need to see the bigness from inside.
Splinterlands got big but I guess a few loss in not showing them just how big the platform caan be beyond just Splinterlands.

Layer 1 doesn't need to be scalable for Bitcoin, it needs to be secure. That's why the blocksize remained unchanged: so that operating a full node -securing the network -remains cheap. Layers on top, like Lightning Network with Bitcoin, will provide the scalabilty and practicality.

People compare Bitcoin or another chain to Visa without understanding that Visa is not a Layer 1 technology but a scaling solution to fiat.

Why Saylor does what he does is because of his understanding of first principles of economics mainly by the Austrian school: the hardest money to produce more (smallest inflation) will end up as the main medium of exchange if you let the free market decide (which we don't have atm with government enforced money). Couple that with security: pre-programmed inflation reduction to zero that cannot be changed by any single entity. That is the perfect storm for Bitcoin as the hardest money that exists.