Is It Worth Posting to SplinterTalk?

I've got a bit of a soft spot for the Splintertalk Platform which specialises in Splnterlands related content (with the occasional sports type guest-post when people get their tags confused) - and TBH there are some days were I actually enjoy reading and writing about Splinterlands more than I enjoy playing the game!

If you post to the platform, by using the SPT tag, you can earn SPT, the native token of the Splintertalk Platform, along with all your usual rewards by posting to Hive (Hive itself and whatever other crazy tags you've added on).

But would it be worth your while posting primarily to Splintertalk purely for the sake of earning SPT?!?

You can currently pick up SPT on Hive-Engine for around 0.001 Hive per SPT or approximately $0.0005 cents, rounding up on the current Hive price of around $.40.

This means the following SPT rewards would earn you the following amount of Hive and $$$ (assuming Hive at $0.50 for optimistic ease of calculation!):

Final rewards are halved because of the 50-50 split between content creators and curators, so ATW of writing that's

What can you expect to earn on Splintertalk?

Some posts do get rewarded with 10K SPT, this seems to be the maximum, judging by the definitive evidence: a screen shot I took of the Trending page earlier this morning: 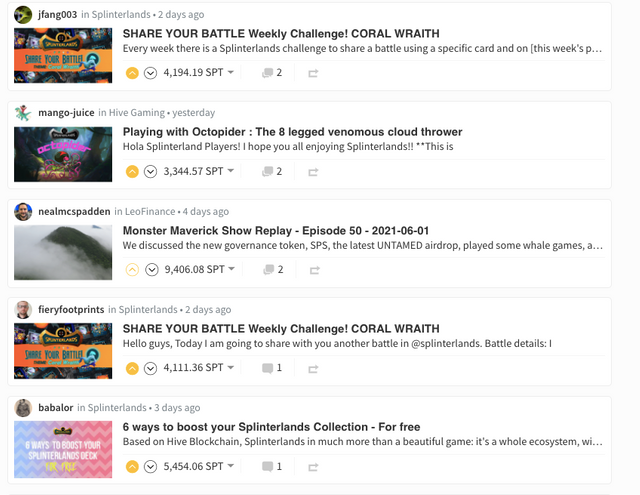 Your ability to earn 10K SPT for a post depends almost entirely on whether you attract a vote from the massively SPT powered @monster-curator account, managed by @flauwy.

You're very unlikely to get a 10K SPT vote, only the major announcement and serious analytical posts get this kind of reward, which is fair enough - a weighty vote for serious posts and serious news.

It is possible to pick up a nice 5K ish @monster-curator vote - if you write a decent battle challenge post (for the Splinterlands Challenge of the Week) or a decent quality post about Splinterlands more generally or do a decent drawing for the weekly Splinterlands art contest, then you will land yourself a vote somewhere in the region of 3-6K SPT, which would being you in $0.50: 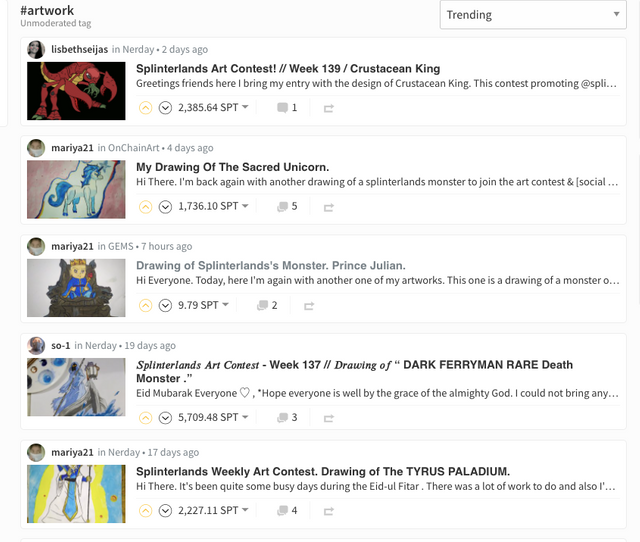 Other than @monster-curator there are a few larger accounts who peruse splintertalk from time to time and plop upvotes on decent posts. I do this myself every day, although I'm not a huge account, only 500K SPT, I can still earn around 40 SPT for 1 100% vote! It's worth doing for the curation return.

And of course you'll pick up SPT rewards based on whoever has you on autovote with their spt weight added on too.

I've experimented with posting a few 'medium level' posts - on interesting battle and strategy, through my @revise.spt account, but I seem limited to around the 2-500 SPT range.

Spam reward posts are irritating and REALLY not worth your time

I really wish people wouldn't do this, as their rewards are typically limited to around 10 SPT.... or $0.001 - probably not even worth the time it takes you to do a screenshot and make the post.

And YES, if I see a shitty spam post I will DV it to removed that reward.

It's a matter of principle.

It's all about the Upward Price Potential of SPT

As with Hive maybe you shouldn't look at your SPT earnings in terms of today's price, rather think about the future price potential, which I think is pretty good:

The limiting factor is that I calculated that with 100 billion max supply and a rough print rate of 550 000 a day, SPT will go on being printed for the next 5000 years.

But then again I guess that kind of inflation could be mitigated by an increasing user base, all staking away!

Final Thoughts - Worth Posting to Splintertalk?

For me, when the content is appropriate, absolutely yes!

Especially for the weekly battle challenge, and for the occasional economics post I do featuring Splinterlands cards, certainly.

However, I don't think spamming daily rewards for <100 SPT is worth anyone's time, even if the token moons!

And of course it's not just about the price, I enjoy gassing about the game, it's easier to talk about than play some days, after all!

So it's worth posting, whether I'd invest in it with that FANTASTICAL 5000 YEAR PRINT DURATION is another matter! Then again, as with ALL the other Tribes on Hive, that can change on the whim of the person who created the token!