My simple strategy for hedging into Stable Coins...

Given the recent action in the crypto markets I've decided to rebalance a little towards Stable Coins, just a little hedging rebalance in case there is a downturn.

I'm aiming to stack more of each of the above the in longterm, but only after I've hedged a little into Stables.

My strategy to do this has been quite simple:

I've converted some of Litecoin into said stable coin and then done the following:

The stables in the vaults earn interest in both the stable coin and AUTO which I can then use to buy more stable coin (every few days, just whatever the selling price is!).

And it doesn't matter whether the BNB or cake goes up or down, as this is supposed to be a hedge into Stablecoin - so I'll probably get a gradually increasing amount of USDT etc. as well as fees earnings for pooling.

And I've got my little vault and BNB/ cake pool hedge just to make sure I'm earning something on those.

Once I've reached my stablecoin targets I'll start to accumulate more of the next targets on this list.

I designed a wall chart to help me do this - NB the targets are fictional! The point is the colours - RED first, then Orange and so on through the colours of the rainbow.

The plan is to power all the way up one column first, then the second and so on... ticking off as i go! 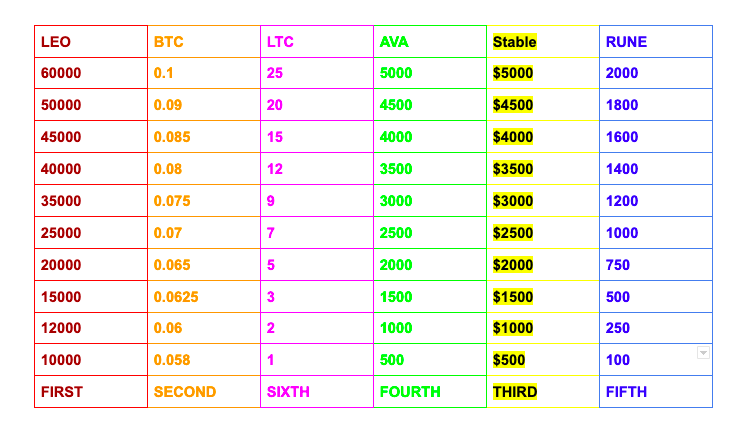 Through the colours of the rainbow I go.

NB - the numbers above are just a fictional representation of both my own targets and the order!