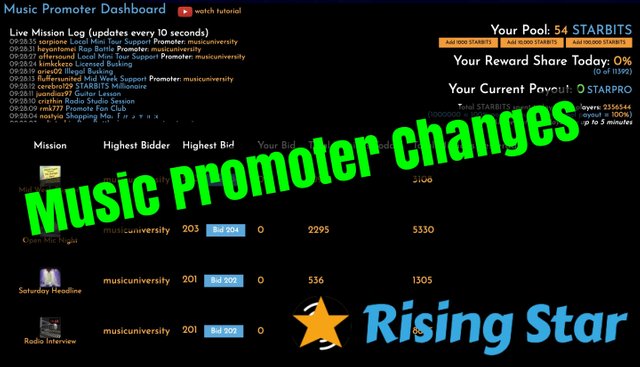 When we launched Music Promoter we had a mechanism in place to make sure that people did not get too many STARPRO compared to the value of STARBITS they had burned. 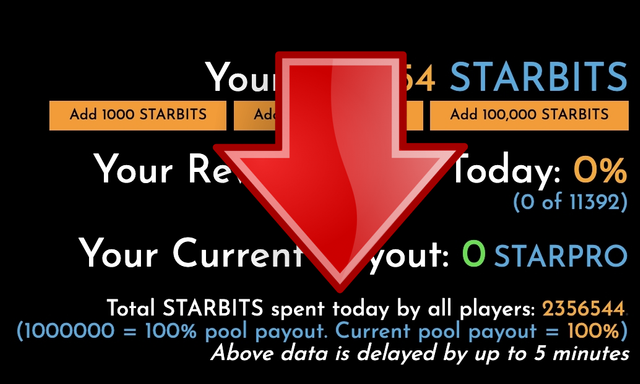 What we then failed to do was adjust this value as the STARBITS price changed.

In theory the lower the STARBITS price goes the more STARBITS would be burned in Music Promoter as players can get better value from STARPRO and this has happened to an extent but not quite enough. 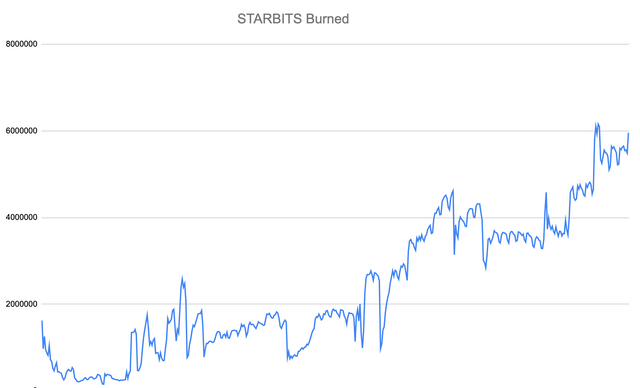 The above chart shows how the number of STARBITS being burned has increased over time to its current level of about 6,000,000 a day.

From tomorrow the minimum will therefore be set to 7,000,000 and the number of STARPRO issued will be reduced if less that 7,000,000 STARBITS are burned.

This number will be modified as needed depending on price movements.

We would like to open up another idea to put upwards price pressure on both STARPRO and STARBITS and that is a daily incremental increase to this number.

For example we could increase the minimum by say 1% a day regardless of the STARBITS and HIVE prices.

We would love your feedback on this and we will take it onboard before deciding whether to implement this or not.

Bear markets are always tough and many people leave only to return when prices start rising again. I am sure this one will be no different so we are working hard to make sure we are stronger than ever when that happens.

For example we are working on an exciting new feature that requires a little bit of teamwork and will of course include more use cases for STARPRO. More details will follow in due course but we think you are going to love it!

As always we thank you for supporting Rising Star and look forward to your comments.

Jux and the Rising Star team.

Contest: Nominate a symbol for the quark.

Makes sense to me..I'm not to keen on the daily increase though. If you not a whale, one already struggles to generate a little bit of strapro from music promoter. Am pretty excited to see new features as always! !PIZZA

Thank you for the feedback. Will certainly take it on board!

Dang... that daily increase sounds rough. I'm already struggling to keep enough fans just to run the daily millionaire mission and 8k of that 10k earned goes right back into maintenance to be able to keep playing.

U change this after draining out during 2 entire years 80% of de daily STARPRO within 4 accounts, one of them owned by Jux?

Rising Star is going to Burn in Hell.

U change this after draining during 2 years 80% of the Daily STARPRO pool within 4 accounts, one of them owned by Jux?

The project will die in a matter of weeks.

That's a shame. I was hoping that the changes would be to prevent the handful of whale accounts from monopolizing the StarPro earned through Music Promoter.

I am not sure what you mean. Anyone can outbid anyone else. STARBITS are very cheap at the moment so it's easy to get a good share of the pool.

If we placed any kind of restrictions on accounts that would just reduce the number of STARBITS being burned which is the opposite if what we want.

If you look at some of the accounts that earned STARPRO yesterday for example you will see that there are plenty of players on the list:

I think you made his point - it's not about the quantity of players, it's about the distribution of the SP. In the current model, the more SB you can chuck at it, the more SP you can earn - so looking at thge numbers you provide you have the top 5 players earning ~75% of the daily supply. Sounds like whales to me 😉

To be clear, I have no axe to grind here. To me, as ever - it is what it is, and my brain goes soggy when folk start talking about liquidity and inflationary tokens and burning and stuff.

I'm currently splitting the SB I earn 50/50 between buying packs and hodling. On occasion in the past if prices have been favourable, I've cashed some of the hodling out and used the money to buy music. Seemed apposite. 😉

I was lucky to get in at the start of Music Promoter where investing a modest amount got decent returns - enough to see me though the world tour and carry me into the fan club stuff a bit.

If a new mechanic comes in where I need SP to join in something that looks cool to play (sounds intriguing, by the way...), I may divert some of my pack buying or hodling to buying SP on the market - 'cos I look t those figures above and what the current MP bids sit at and I'm not sure I can swim in those waters...

Looking at the market, unless I've screwed up my calcs, 1 SP on the market at the moment costs ~67500 SB. So easier to let the top 5 in that list above invest, then I'll buy off them in the market I guess. 🤷‍♂

But like I said, as soon as I try to get clever with the tokenomics, my brain goes like this:

So I guess I should shut up and carry on grinding the missions and buying my packs...

I still get confused why people think whales are a negative thing though. If they are willing to spend the STARBITS then they help everyone because the alternative is they either don't buy STARBITS or they sell the STARBITS they have earned. Both scenarios put selling pressure on the tokens. Trying to stop people spending money in the game doesn't make sense to me.

Also the list I posted above is just one day. The top people change quite frequently because people decide to stock up on STARPRO by bidding the highest for a day then stopping so it's not just a few accounts that get the most STARPRO.

I still suspect that 'the top people' are still a small percentage of the daily players, though. But I may be wrong. 😉

Not that it matters. Like you said - maybe whales are good for the reasons you say (and remember gribbles gets mushybrain when he tries to grok this stuff), but I still think the Music Promoter is probably a part of the game the vast majority don't feel like they can participate in.

But hey, I trust you Jux. As I've said plenty of times before - you've built something that has brought me great pleasure and introduced me to new friends and music. Your credit is good here, sir.

I should perhaps stay out of these sort of discussions, given my admission that I don't appreciate the intricacies of the tokenomics.

I always appreciate your POV as it is often different than others.

That is not true my fren. JUX is from GB and Musicuniversity is from Germany. I don't know if they both attend hive-fest but if so I will try to get a selfie of us 3 so you can have proof. If you check how the two accounts use the english language you will probably notice that there is a difference. That is because MU is from Germany and english is not his native language.

BTW, here's Jux dumping 10 million STARBITS when he thinks no one is watching. 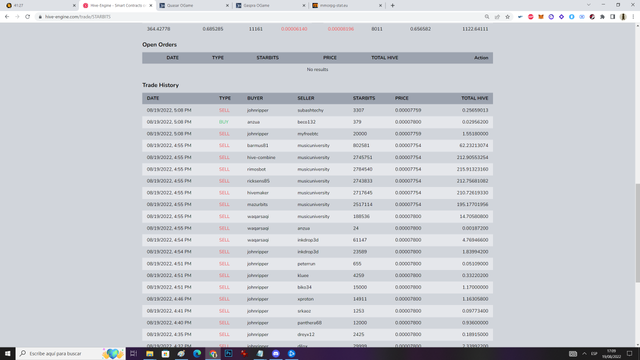 Why trust a Liar btw?

I'm pretty sure what he means.

Paleshelter is someone close to you.

And this was same story day by day during entire years.

STARPRO DAILY REWARD POOL 80% USED TO BE FOR:

I have lost alot of starbits over the months trying to figure out what to do to win n promotor. Nothing was given to me I earn every bit of what I make. He is NOT @musicuniversity I know them both very well. You need to get your facts straight before opening your mouth. @distopia4444

Crashing Star needs to give Starbits some life support or else this game is dead.

Not true at all. STARBITS are an inflationary token but STARPRO has a fixed supply so people should concentrate more on that. We have made STARPRO the focus of all new features to increase demand as we move forward.

Also we are in a bear market but still have many players enjoying the experience and we are continuing to innovate and build so there is always something new and exciting to try.

Please remember that Rising Star is a game first and should never be seen as financial tool. If you find that you are not enjoying the game when the price of a token is down then you are probably playing it for the wrong reason.

I'm confused with Music Promoter. Do you only earn STARPRO when you outbid someone else? So how do you outbid them?

You get one "point" towards your share of the reward pool of the daily STARPRO payout for every mission that you were the highest bidder for.

You outbid someone by clicking the "Bid" button.

So in the above example you would bid 215 STARBITS and it would show you as the highest bidder. For every "Mid Week Support" mission completed by a player while you are the highest bidder gets you another point towards your share of the rewards.

I would recommend watching my tutorial video and maybe searching Hive as there are some posts by players about it.

actually, your explanation here is crystal clear than what I have read and watched in other posts and videos. Thank you I now understand.
So I think this is now more of a strategy and luck =)
Oooooh I will love to try this

1- about teaming, unless i misunderstood it

We may not help one another right ? That's why you discarded the send nft option in your market ...

And now you add "teaming" actions ?
For example we are working on an exciting new feature that requires a little bit of teamwork and will of course include more use cases for STARPRO. More details will follow in due course but we think you are going to love it!.

2- about the 7million starbits to burn

Why not setting a dynamic amount of starbits, so it adapts when it goes down, but also when it shall go back up.

Same for hive packs prices, why don't they adapt to starbit prices ?
The real pack price is 10K starbits/pack right? As we seen in the past when you adapted following the values of the tokens...

It's quite difficult to adapt in real time as prices can move rapidly such as the recent pump and pull back we saw with the Hive price. It's better to take an average.

which is also feasable in dynamic, in the script. Using some API to know instant prices