Polygon (MATIC) Rising 60% In 4 Days, Starting To Gain Back Losses. Why Is It Rising And Can It Continue To Rise?

Polygon (MATIC) dropped as low as $0.31 4 days ago after higher selling pressures this week. MATIC has started to recover sharply after falling to its lowest prices in a year. MATIC is up almost 60% in 4 days, returning over $0.5. As uncertainty continues in the crypto markets, this rise is truly a great achievement. So why is it rising?

Polygon (MATIC) is currently trading at $0.51. After falling to $0.31, it rose 60% in 4 days, achieving a great success. MATIC is up about 25% today, and on a weekly basis, it's up more than 17%. Despite the declines in the crypto market this week, this rise is quite significant. While many cryptocurrencies are in the red zone on a weekly basis, MATIC is in the green zone. MATIC became one of the most rising cryptocurrencies on a daily and weekly basis. 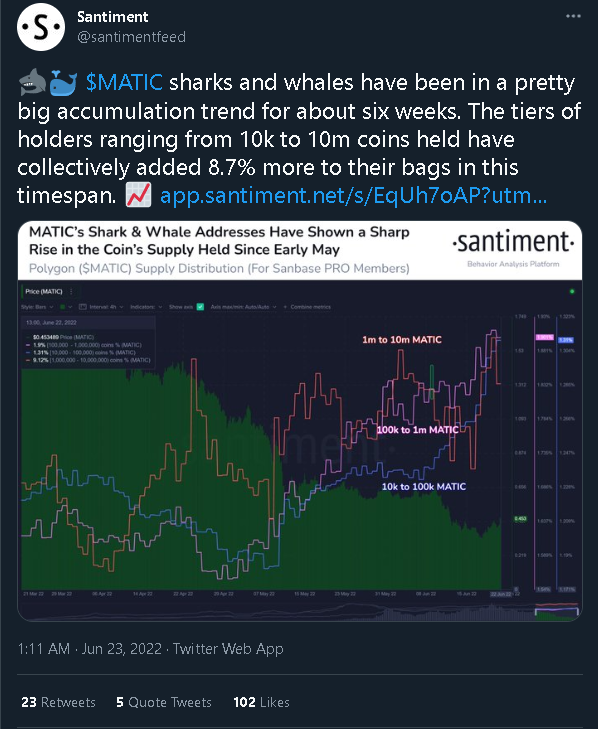 Whale wallets continue to accumulate MATIC, according to data published by Santiment. Wallets holding 10,000 to 10,000,000 MATIC continue to buy MATIC. The amount of MATIC in whale wallets appears to have increased by 8.7% in 6 weeks. It seems that investors are in a great accumulation.

In addition, Polygon has partnered with the on-chain carbon market, KlimaDAO, to achieve carbon neutrality. With the help of KlimaDAO, Polygon achieved carbon neutrality. Also yesterday, Polygon made a statement and announced that it has received $400,000 worth of carbon credits, representing 104,794 tons of greenhouse gases. In addition, the partnership with KlimaDAO had an impact on the price increase.

Our world is facing an environmental crisis, and the blockchain industry must do far more than promise to stop adding to the problem.

Unexpected increases in inflation and interest rates created definite decreases in money markets. MATIC dropped as low as $0.316 this week, its lowest level since April 2021. Afterwards, it started to rise rapidly and increased by 60% in 4 days to $ 0.51. Polygon (MATIC) has been one of the cryptocurrencies that has recovered the sharpest in the past few days.

MATIC is still significantly far from its December 2021 high of $2.92. But it signals that it can recover quickly. If the whales do not sell their holdings and selling pressure does not occur, MATIC may continue to recover its losses in the coming days.

If it can clear the sell-off above $0.5, it could move towards the $0.6 resistance. There is a major resistance at $0.7. If it can break these resistances, it may move towards $1. If it fails to continue the rise, it may decline to the $0.4 support.

What is the carbon credit about? Is the company behind Polygon getting some funds for being carbon neutral?

Polygon has ensured that every transaction – whether the minting of an NFT or a DeFi trade – is accounted for and its environmental impact is offset by offsetting the network’s historical emissions.
Polygon issued its Green Manifesto in April, pledging $20 million for initiatives that will use Web3 to develop new solutions for on-chain carbon credit retirement.