Did you know Binance was an accomplice in Elon Musk's Twitter Takeover?

It's been a couple of days since Elon Musk became the new owner of the popular bird app. His acquisition of the bird app has made it the most expensive purchase of a social media app. I even remember seeing on Twitter, a picture that showed the billionaire could buy several more than 10 expensive and big football clubs and still have some billions to spare. It's quite impressive when one imagines the enormous amount of wealth Elon Musk has at his disposal, especially in his stocks and other holdings. I think it should be about $267 billion if I'm not mistaken. So it's easy to say that the billionaire could buy the bird app all on his own. But here's the irony about the business these billionaires conduct. 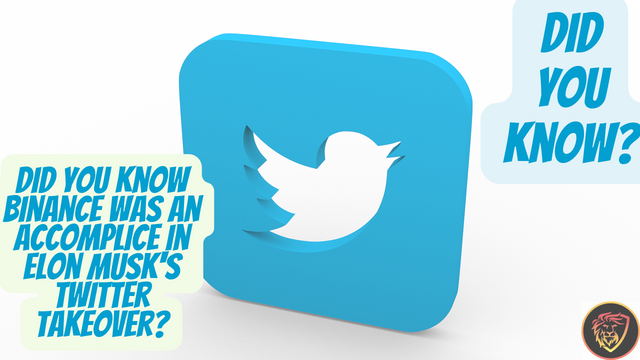 Image by Pixzel from Pixabay

They operate on the business mindset that all their money should not be the main capital that funds a business or startup even when they can afford it effortlessly, rather one should also seek partners or other investors as well. And this is exactly what Elon Musk did when trying to take over Twitter. One of his fellow accomplices during the Twitter takeover that has come to the limelight is the Crypto Exchange Platform known as Binance.

In accordance to the article published by nairametrics.comtitled "Binance commits $500 million to finance Elon Musk’s Twitter takeover" confirms that Binance invested 500 million dollars in funding Elon's bid for Twitter which the United States Securities Commission confirmed in their books. The news site even went on to inform us that it was a total of 18 co-investor who backed Elon up in raising the funds for the purchase. Aside from the renowned Binance, other investors include Sequoia Capital Fund and Fidelity Management and Research Company.

Even the renowned wealth magazine, Forbes confirmed it in their post "Musk Adds Binance, Ellison, Prince Alwaleed And Others To $44 Billion Twitter Deal"
When they said, "Elon Musk has added more than a dozen new individuals and investment firms to his $44 billion proposals to buy Twitter, including Oracle

This just goes to prove that Elon has successfully employed the tactics of calling in other investors into the opportunity of gaining the bird app at a high price and building it for better use and do not forget making a good profit out of it.
Finally, it is more business-wise to call another rich investor to fund the project and stand a chance of making more out of the app rather than funding the entire project all alone. That's the Elon Way!!!!

Did you Know that The Simpsons Family Predicted A Pump in the Price of Shiba Inu?

Yay! 🤗
Your content has been boosted with Ecency Points, by @samostically.
Use Ecency daily to boost your growth on platform!

I didn't follow closely this, but it is good to know. By the way, what is your opinion about Elon Musk's move to buy Twitter to make it a "free speech place" ?

I really want to see how that plays out. I'm a strong believer of free speech.
I'm more concern how the algorithms would be altered to promote crypto.

If free speech becomes a strong priority for elon, then we should see people get more understanding of web3 and Hive too.

Thanks for stopping by. !PIZZA

If free speech becomes a strong priority for elon, then we should see people get more understanding of web3 and Hive too.

This is where I am less sure. Many usually stop after sentence #1. However, maybe you will be right. I guess we need to wait and see. Thanks for sharing your opinion (and the pizza) :)

A pack of the world's richest people all working together.

To get richer maybe

I would like to ascribe lots of imagined conspiratorial motives to them, but yeah, getting rich is probably the simple and most true answer.

smart man with a smart move. when rich people comes together you should know it just because of 1 thing opportunity to make more money

Binance becoming a part of another hostile takeover. 😂

I guess from all levels of wealth, it makes sense to go buy a company with other people's money!