Getting Known To DEX Without Spending 1,000 USD in TX fees 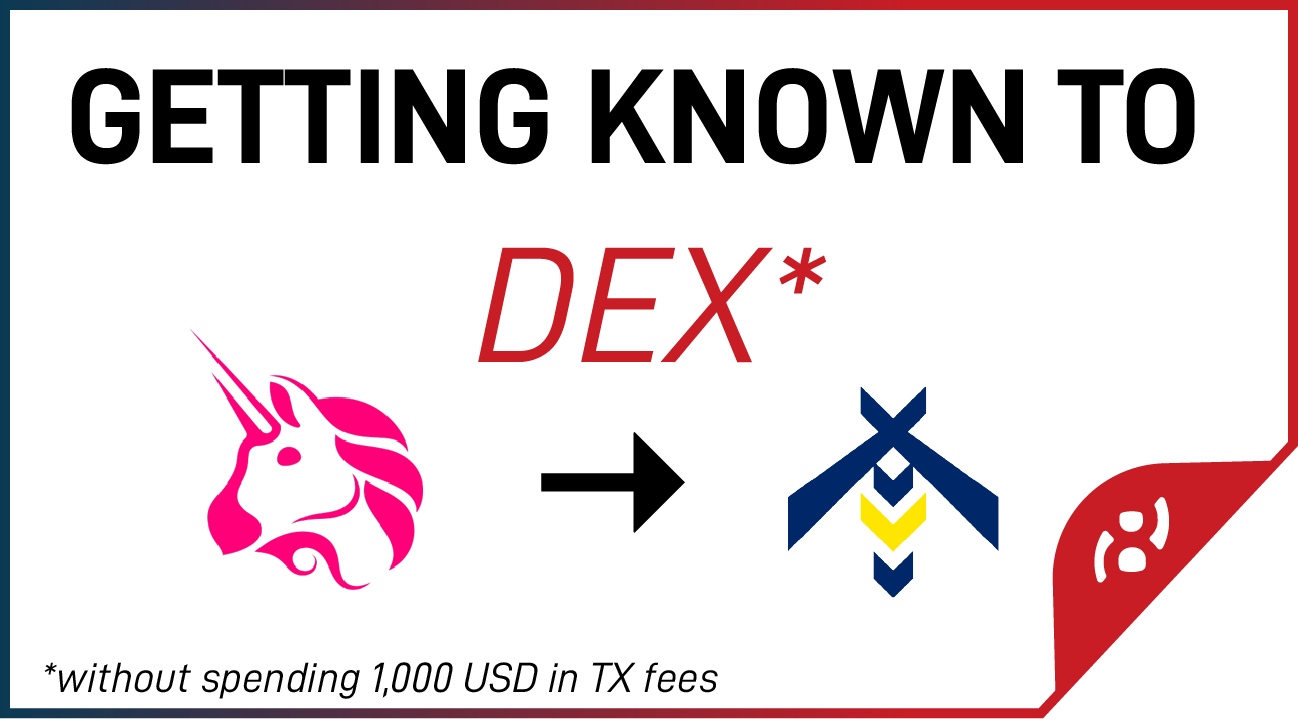 I'm sure it's the one or the other like me. Maybe you didn't hear about the Uniswap Airdrop in 2020 and have therefore never used a DEX? I for one have already used Switcheo (Neo Blockchain) 3 years ago, but the user experience at that time was rather modest. Terms like Liquidity Pool and Farming-Rewards were not a topic at that time. That's why it was time for me to deal with the topic of Dex again. I invite you to participate and suggest we start from the beginning.

In a decentralized exchange, this task is performed by so-called smart contracts. Contracts on the blockchain, via which corresponding processes are mapped in terms of programming. In simple terms, these smart contracts represent the rules to which participants in the network must adhere if they want to execute corresponding processes on the blockchain.

Let's take the example of trading pairs. In a central exchange, a company ends up deciding which assets are tradable on its in-house platform. A central exchange lists a new trading pair and provides the corresponding infrastructure (customers can deposit or withdraw tokens. Traders provide liquidity by placing sell orders or withdraw liquidity by placing buy orders and the central exchange collects fees for all trades and use of infrastructure (withdraws and deposits). Important to understand at this point: Proper exchanges like Coinbase or Kraken do not initially offer liquidity. I have read this in some DEX/CEX comparisons lately. This may be the case with smaller "exchanges" like anycoindirect or the like that sell from their own inventory, but otherwise this is also the case with Exchanges that users provide liquidity.

In the case of a decentralized exchange, the users also provide the liquidity. Here, however, no central authority lists the corresponding trading pairs. In a decentralized exchange, each user can independently "create" a trading pair by offering initial liquidity for a trading pair that has not yet been listed. For example, one could (if this does not already exist) create a trading pair on Uniswap that allows direct exchange between UNI (or any other ERC-20 token) and WLEO. This would require luring any amount of UNI and its equivalent in WLEO in a smart contract. For providing this liquidity - no matter for a new or an existing trading pair - the provider receives a portion of the fees collected from trading the token. These fees are managed in a decentralized manner by the holders of the platform's governance token. So in the UniSwap example, this would be UNI.

Using this example, I would like to briefly note the following:

All very exciting, and very extensive. I realize that I'm rambling on, so I'll close the thematic introduction at this point. If you've never read anything about DEX and CEX, you might now have an idea why everyone is currently so caught up in defi fever. Soon as long as Corona is raging. Sure, there's a lot more to DeFi than providing liquidity on a DEX. But let's look at it head on.

I had this desire, but to be honest the ETH fees are currently again too high for me to then just play around a bit in UniSwap. Sure, sometimes you have to pay a price if you want to learn something new. But there is surely another way.

But of course! At this point, thanks to @ligerwoods whose post I stumbled across a few days ago. In it, a copy-cat of UniSwap is presented, which runs on the WANchain. The WanChain is an Ethereum clone without significant transaction costs. In terms of performance, I think it's comparable to Hive. Optimal conditions to play a bit at this point.

Quick disclaimer: I don't really have an opinion on the subject of WanChain or WanSwap. It just is what it is - an Ethereum clone with a few adaptations from the Asian region, so partly similarities with BinanceSmartChain, but without significant volume or corresponding notoriety.

But the minimal transaction costs, speed, and strong similarity to the Ethereum network are exactly why I wanted to catch up on my Dex experience session here. So I exchanged a small portion of some shitcoin in my portfolio on Binance into WAN (native currency of the WANchain) and off I went.

If you know Ethereum, you know Wanchain.

First, the big advantage of knowing Ethereum and getting on a clone on the go stood out. Metamask, Etherscan? No problem. Is called here Wanmask and Wanscan. Uniswap is called WanSwap as mentioned above (and who would have thought).

I think you guys got it. Find something on Ethereum, take out part of the name and replace it with Wan. You'll probably find it. But moving on.

Ready for your first experience with a Dex?

And created a WanWallet in the same process as Metamask. Copied my address and sent the converted WAN to it. If you want to buy yourself a little play money, besides Binance, WAN is also listed on KuCoin, Huobi and more:

To be honest, the range of Exchanges, Binance excluded, is rather scary. From my perspective, they are not the top addresses, but well, it should not bother us too much for the experiment.

You can check if your withdraw from the exchange to the WanWallet was successful on Wanscan:

If you were successful, we can jump directly to WanSwap. WanSwap is, as mentioned above, a Uniswap clone that offers more or less the same functions. To use it, we first have to connect WanMask. You can do this either via the connect function on Wanswap.finance or manually via the extension. If you have problems here, restart your browser.

Once on wanswap.finance my first goal was to swap about half of my WAN into WASP, the governance token from WanSwap, and then see if I could provide a trading pair for those two tokens: 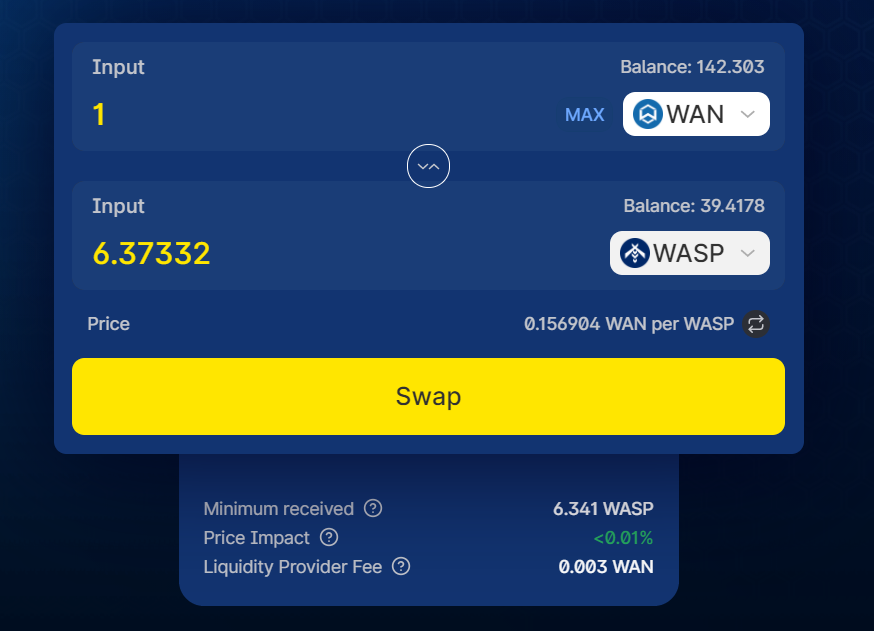 Confirmed the swap on the terms shown and approved it in Wanmask: 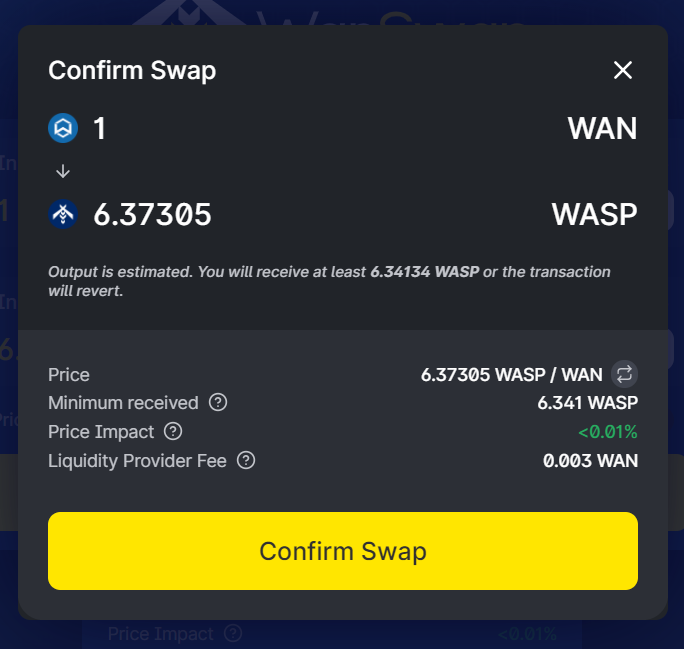 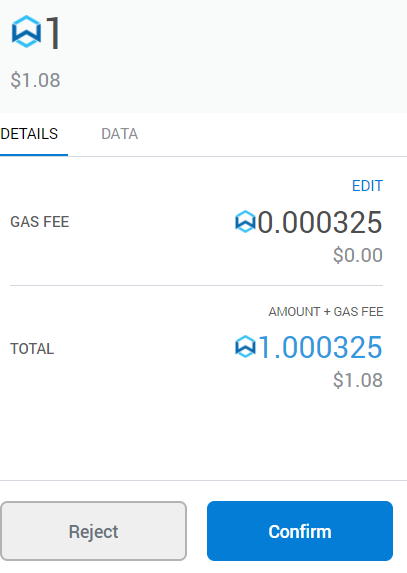 A few seconds later the confirmation appears, the transaction is visible on Wanchain and I now have WASP tokens. So the next goal is to provide liquidity for the WAN/WASP trading pair. Whoever provides a considerable volume here can not only earn from the fees, but also from farming the government token WASP. More on this in a moment.

First, I go to the "Pool" tab and click on "Add Liquidity":

I select the WASP token as the counterpart to the WAN and specify how much liquidity I want to provide: 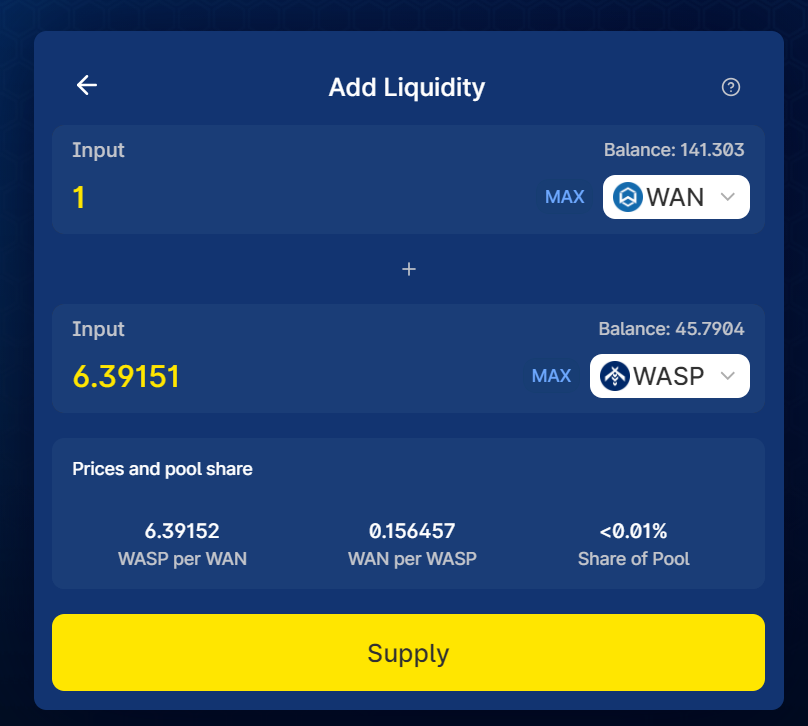 This results in a compensation of less than 0.01% of the total fees paid in this traiding pair in this example. By clicking on "Supply" we can see more details: 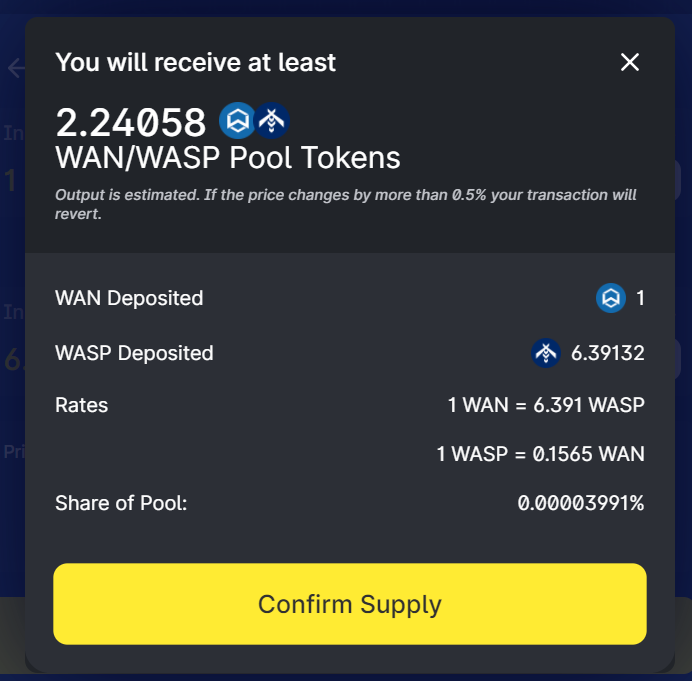 So one trade - if you can put it that way - corresponds to a number of 2.24 WAN/WASP pool tokens - which represents a share of 0.00003991% of the total pool. I give the final confirmation and provide the liquidity. The following shows my current pool position in the pool overview: 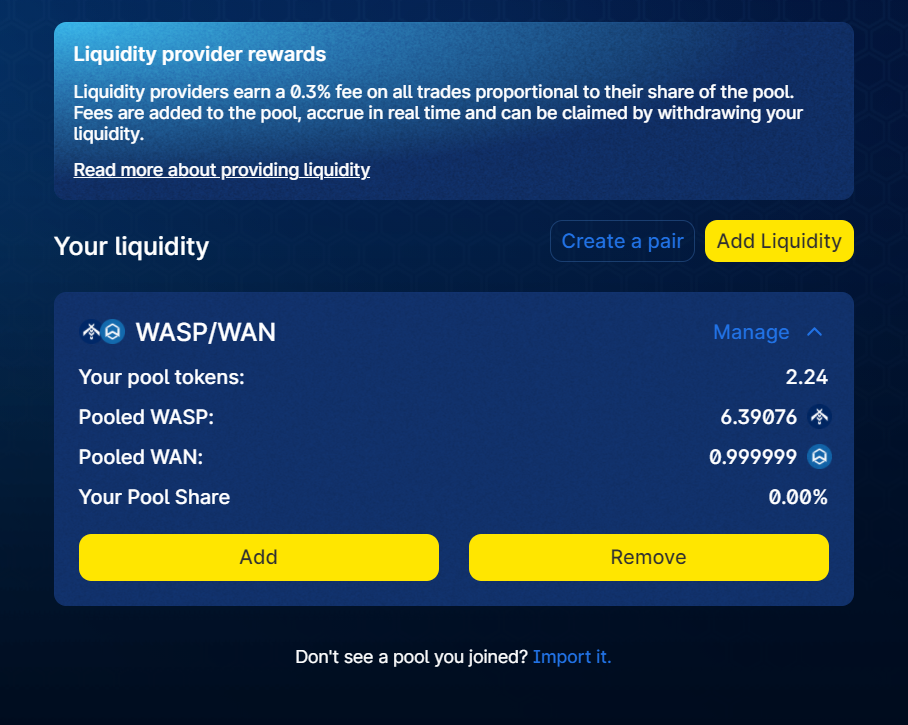 Now we come back to the WASP tokens. When such a decentralized exchange such as WanSwap launches, the tokens need to be distributed. One option that has become popular is so-called liquidity mining. Here, users are given a special incentive to offer liquidity via the platform. This is important for the platform because without existing liquidity, no function is given and larger volume tends to be a sign of security. This process of liquidity mining is limited in time until the maximum supply of the respective government token is reached. Currently, absolutely horrendous % can be found on WanSwap, as well as on many other DEX, which is why I took a look at the whole thing.

We switch to the farm tab and look for the WAN/WASP pool: 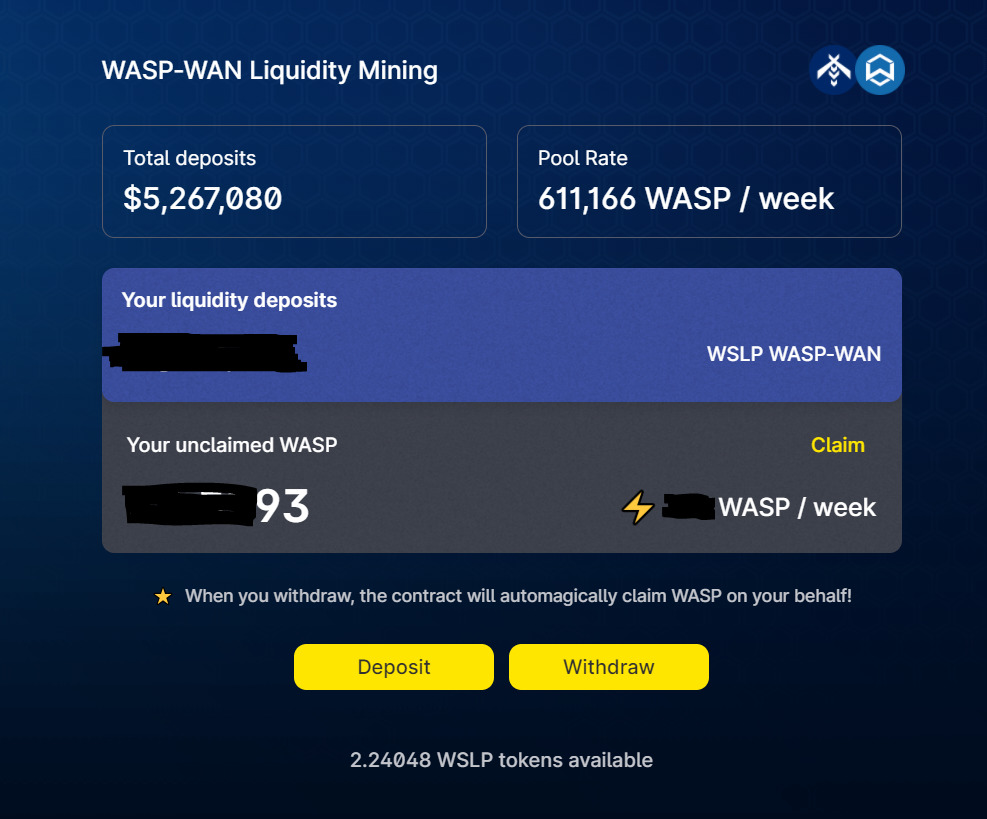 Next, I click Deposit and "stake" my WAN/WASP pool tokens in the liquidity farm to get a portion of the newly distributed WASP. These then trickle into my wallet every 10 seconds and are claimable at any time.

That's it at this point with my short Defi excursion. I may see if I can get Leo mapped to Wan and offer a corresponding traiding pair on WanSwap. Unlike on UniSwap, there are not so many pairs listed yet, so that one could possibly create some attention there, if WanSwap gets a little more light.

What did you do / learn?

So if you've followed all the steps up to here, you have:

Thank you for participating and see you next time!

Just wondering when we can have so many option then why ETH keep making the ride and keep grossing high fees.

I think this is a very good question, but not really easy to answer. Ethereum is the pioneer in this DPOS sector and probably has the most developers and the largest number of projects running. Then, of course, there is also the hope that Ethereum 2.0, when it is fully functional, will solve the problems. However, I think that all in all there are also projects, such as BSC, which show that this can also run differently and that another project is making a difference here. If you zoom out a bit, you can probably agree that this whole market, especially DeFi and similar applications, is still in its infancy and we will therefore see a lot of development in the future.

Especially people who hold smaller sums in crypto are probably looking for less cost-intensive alternatives, avoid making transactions or buy their assets in a pegged version on another chain.

Number of developers that ETH attracts is really making a difference because they keep developing in ETH and popularize ETH more, a kind of virtuous circle.

In the end, a chain reaction will also be involved. When I think alone that ETH probably has the most trading pairs after BTC, there is of course the effect that people are potentially more likely to enter there as well. Or new people who don't really understand yet what crypto could be and partly already is and then provisionally stock up with the 5 highest marketcap coins or the like. In the end, there are many individual things that play into it. Congratulations @st8z!
You raised your level and are now a Dolphin!