Back in 2016, I bought my wife and I tickets to see Adele live in concert in Stockholm - Little did we know that it would be our last trip out of country together and one of the last trips at all, as we have hardly left our city since. We were talking about it today after seeing Floppy, our daughter's bunny in the picture. We bought it on that trip from a souvenir store in the old town, as my wife was already almost five months pregnant on the trip.

It looks pretty good sitting against the wall of her room - like it belongs. 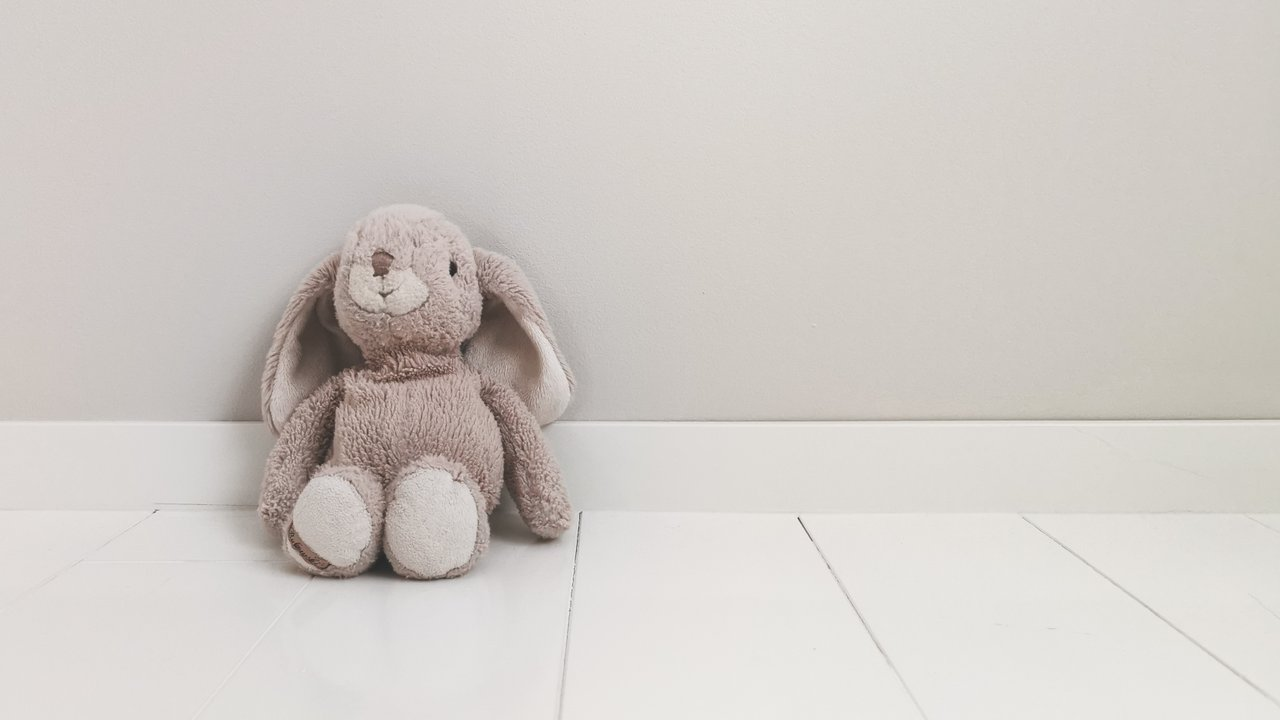 It is funny. That trip we took was expensive as even though it was only Sweden, the tickets for the concert ended up being VIP passes, as that was all that were left by the time I got through to the ordering stage, as it sold very, very fast and there was only limited supply for Finland. But, I knew it would be our last trip alone for a while and we had the money. In fact, we were doing pretty well, as my business was going alright and our overheads were low - so we had a small stack of savings.

Eight months after the trip, I joined Steem, heavily in debt and struggling to pay even the basics. Life can change very fast and I think that this is part of the reason that I am both willing to work as hard and as much as I do and, why I am unwilling to spend anything unless necessary, especially when it comes to myself.

It has been quite interesting to reflect on the changes in myself since the birth and subsequent challenges we faced in the firs years and I recognize I have learned a lot about myself. I have also learned that I have interests and skills that I had never explored earlier and as a result, I have been able to increase my opportunity to earn, both on the blockchain and off.

This isn't saying that I earn well, but I have been able to increase my revenue streams by opening myself up to more work, writing on the blockchain, taking a second job, spending time learning a bit about trading and trying to find ways to increase my access to value, without taking too much risk. I am quite risk averse, because pretty much everything I do is for my family, which means looking long.

But I am also quite a long way behind the eight-ball, so I have to take some risks to try to catch up a little, so last night after talking with @revisesociology, I staked some stable coin into some DeFi nonsense for the first time on Autofarm Network - which took some messing around with Metamask and Binance Smart chain, but finally got it working. I have no idea how secure it is, but I put some in rather than holding a stable coin, as it seems silly not to earn on it and I was tempted to trade it instead.

I don't know how long I will keep it there, but I figured I better start exploring to learn again, as over the last two years I have been getting slack - meaning that I have been so busy, I put it on the backburner. I have favored earning from writing rather than trading as I enjoy it much more, even though I would likely earn more from trading, especially if I improved my abilities. But, while exciting, it is also a bit soulless for me and while I am looking to build some wealth, how I build it matters to me. I don't mind running the odd experiment on various things to see how they work, but ultimately, there has to be some meaning in it.

For me, that meaning generally comes from what I am able to do to improve the well-being of my family and my goal is to increase it significantly. The last years have been rally hard, which is why I have been working so much - but if all the work doesn't amount to that significant improvement, it kind of feels like it is all for naught. I hear of people cashing out their profits and the like, but I don't think I am at a stage where I am comfortable cashing more out than buys anything mother than some random stuff or perhaps, reducing debts a little - nothing meaningful.

I think that part of this is that I psychologically separate crypto from my fiat income, making it "not real" in my head, taking away the sense that is is available. I think I then double-down on this, by thinking that while my income is what it is, my crypto holdings are dynamic and can increase in value quite dramatically. Holding fiat has no such super power, but it feels secure. This means that I do not want to spend it, as I get the fear of how I will feel if it increases dramatically soon. I think this is further compounded by my sense of "need" for it, even though I haven't needed it, since I haven't used any so far.

But, as I feel that I have screwed up the first twenty years of my financial future, I do have a need for it, just not right now. Yeah, I could buy myself a TV or pay for part of the renovation on the house, but what would that get me, other than having those things now, rather than a bit later down the road. At this point at least, I'd rather be patient and see where it leads, than get what I want now at the expense of the future. Yeah, I might never see that future, I might be hit by a bus or something - but, I am not doing this for me alone, I am doing it for me and my family and I have to work under the assumption that they will survive me.

I tend to think longer than most people on various things, but my behavior and habits have rarely helped my gain advantage as I never have the resources at the right time. I am trying to improve this though so that when the opportunities that I predict will have value do arise, I will be ready.

Another funny thing about this rabbit is that it isn't the first we bought for our daughter. I bought one in 2013 from Paris for when we have a child and at that stage, we weren't anywhere near even ready to try - but I knew that one day, we would. Family has always been very important to me and I have learned since childhood that loving relationships can be very difficult to build and maintain when constantly battling to pay the myriad bills - because while love is free - not much else in this world is.

And I have also learned through having my daughter, that even when I think I am well prepared, it isn't always going to be enough to cover what is needed. But a lack of preparation means that nothing can be covered.

As said, I need meaning in the things that I do and after facing a lot of struggle in life, I feel that what I am doing is an act of defiance, a challenge against being a disenfranchised consumer and an investment into being prepared as an owner - a person with responsibilities and the will to meet them the best I can.