Live off crypto and expect a fight

A lot of us would like to reach the dream position of "living off crypto", but I suspect that for the vast majority, it will never be more than a dream of an impossible future - not because the opportunity doesn't exist, but most people do not have the discipline to grow their stack and protect their stack for long enough. Many will get spooked and will sell and a lot will use their various incomes and gains to live now, buying a better this or that - "just this month." But things are changing. Much like in my posts about the social normalization of crypto in society, the likes of Paris Hilton are not only bringing celebrity to the table, but they are increasing the FOMO of both other celebrities and retail investors. If the new black is Bitcoin, Instagram posts become the fashion runway. 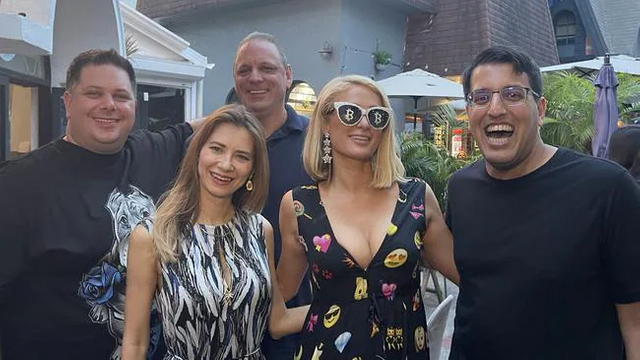 But, there is theoretically only 21 million Bitcoin available and if Paris Hilton got in, how much did she buy? As I have mentioned before, there are 55 million millionaires in the world, meaning that if each decided to buy the total supply of Bitcoin evenly, they could each have 0.38 BTC. lols. It is pretty obvious that if there is a rush on Bitcoin, there isn't going to be enough to go around, even amongst the wealthy, but they are going to want it.

Yet, we in crypto are impatient and most of us don't actually believe much in the future of crypto, evidenced by how willing we are to sell it to the likes of celebrities for fiat. At the end of the day, most crypto holders don't actually want to live off of crypto, they want to use the crypto they have and get to buy fiat and live off of that instead. Essentially, they aren't actually opting into crypto - they are getting in and exiting when they can or must, which is why so many still see it as Ponzi scheme.

This is why the move by El Salvador to potentially make Bitcoin legal tender is such a big move, as it brings legitimacy to the token as a currency and allows people to Stay in crypto whilst still using it. This is a mammoth event and once there is an increase in seamless interoperability across many chains, many cryptos will act as currencies without ever having to touch the legacy economy. Not only this, once this becomes the norm, businesses will increasingly build onto the blockchains and generate value and wealth, that will never directly touch the legacy economy either.

The speed of change that could happen in society toward crypto could be insanely fast in terms of just how large the ramifications will be, and this will be reflected in the shifting economy. In many ways, this move should scare the bejeezus out of us all, as there have been large scale wars fought for less wide-ranging disruption to the economy. The challenge in fighting against this disruption though is, there is no country to invade, there is no collected group to attack, there is no location to serve as a battle ground.

Yes, there are plenty of ways for those with legacy power to slow the change and make life hard for those taking part, but the interesting thing is, the more suffering applied, the more who will ultimately turn to alternatives. People can put up with being controlled when things are going well, but in times of hardship, rebellions tend to rise.

This sets up a bit of a conundrum for those in various forms of power as they will be stuck in a position of losing their consumer audience and cash-cows to the competition or, be forced into adequately serving their audience by offering them better conditions. Either way it is a cost for the authority, as the first will mean a massive reduction in income, the second will mean a massive increase in expenditures.

This sets up a challenging environment that will be difficult to negotiate and require some careful planning and execution - and we all know how good governments are at that. So, they will likely be heavy-handed in their approach and punish those they can to set an example for others. The example they will set is that the enforcer cannot be trusted to have the best interest of the people at heart and therefore, should be defunded. If you consider that many people wanted to defund the police departments for institutional racism recently, it isn't farfetched to assume the call for the same could happen at the next layer up.

And defunding becomes something altogether different when it isn't an appeal to the funding authority who is also the governing body to make the move. When there is a shadow economy that has the power to scale and support all participants, it is less defunding and more, disusing the currency that funds them. By that point, the question of "legitimacy" isn't answered by an authority of one, it is built through the social agreements of the masses. Once that happens, the legitimacy of fiat becomes the question.

Social change drives economic change, as the shifting norms will affect the demand and supply of all units within the economy. In the past, this has largely been thought of as the goods and services of the consumer marketplace, but with the introduction of crypto, currency itself has become both a good and a service in that same marketplace in a way it hasn't existed before. When celebrity benefits from shilling, celebrities are going to shill.

But, unlike the depreciating consumer products that they have been pushing for decades, they are now pushing appreciating assets that provide ownership to those who buy the hype. And yes, it might be bought on hype, but at the end of the day, it is still owned and will increase in usage, stabilizing through normalization.

The other thing that this all brings to the table is that unlike the normal consumer trash that grabs the attention of so many people these days - the new products and entertainments are economic teachers, introducing concepts and practice that many people have never been exposed to before. Not only this, they will be buying into a society of other buyers, people willing to discuss at length about all kinds of investment considerations. This means that not only will people's ownership increase, so too will their financial literacy. The difference that this can make to the world is immense, but if successful, it is fatal for the economy as we know today.

The majority of wealth in the world has been made and and is tied to the current economy. If you want to truly live off of crypto, expect a fight and be prepared.